AnandTech’s review takes a deep dive into the A12 chip in the two smartphones, which is the first commercially available 7nm silicon.

Image of A12 SoC via TechInsights with labeling by AnandTech
According to AnandTech, the A12 chip features a major revamp of the neural accelerator, a redesigned system cache that features the “biggest change since its introduction in the A7,” significant changes to the CPU core, and memory compression for the GPU, all of which has led to impressive performance improvements.

Based on SPECint2006 benchmarking, the A12 performed an average of 24 percent better than the A11 in the previous-generation devices. When it comes to power efficiency, the A12 improved by 12 percent, but with memory heavy workloads, power consumption was up, for an average power usage of ~3.36W on the A11 to 3.64W on the A12.

AnandTech’s benchmarking tests suggest that the A12’s Vortex cores and architectural improvements offer a “much higher performance advantage than Apple’s marketing materials promote.” Apple’s A12 beat the best Android SoCs both in performance and power efficiency. 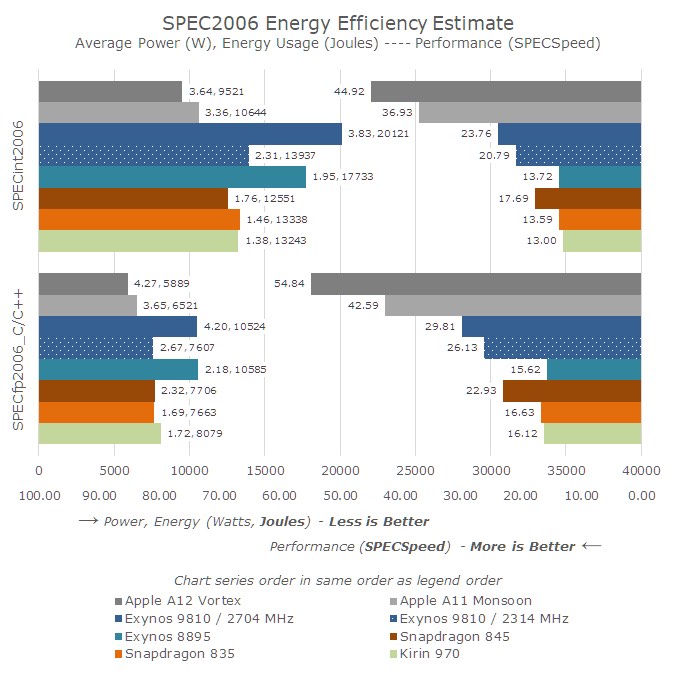 AnandTech says that it’s “quite astonishing” how close the A12 and the previous-generation A11 are to desktop CPUs, with “very small margins until Apple’s mobile SoCs outperform the fastest desktop CPUs in terms of ST performance.”

As part of the review, AnandTech also offered a look at how Apple has improved performance in older devices by tweaking scaling performance. The A9 in the iPhone 6s, for example, took 435ms for the CPU to reach maximum frequency, but that time was cut to 80ms in iOS 12 for a “great boost to performance in shorter interactive workloads.”

Similar improvements were made to the A10 (going from a 400ms ramp up time to 210ms), but there was little change to the A11. 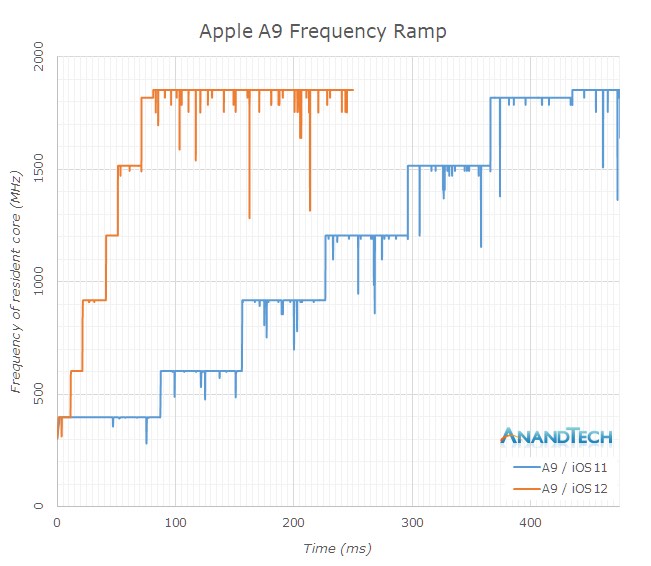 All in all, AnandTech said the iPhone XS and XS Max are a “big shift” for Apple’s lineup with a “beast of an SoC” that’s offering performance improvements of up to 40 percent.

Apple’s marketing department was really underselling the improvements here by just quoting 15% – a lot of workloads will be seeing performance improvements I estimate to be around 40%, with even greater improvements in some corner-cases. Apple’s CPU have gotten so performant now, that we’re just margins off the best desktop CPUs; it will be interesting to see how the coming years evolve, and what this means for Apple’s non-mobile products.