If anyone asked me what’s the best, most affordable way to add bass to a small stereo, home theater, or computer sound system, I’d tell them to buy the Monoprice 9723 subwoofer. The 9723 emerged as the clear favorite after 20 hours of testing by our panel of audio experts, including extensive blind comparisons with 12 other subwoofers that cost less than $300. It delivers powerful, well-defined bass notes that can shake your couch a little and help make movies and music sound more satisfying and realistic. 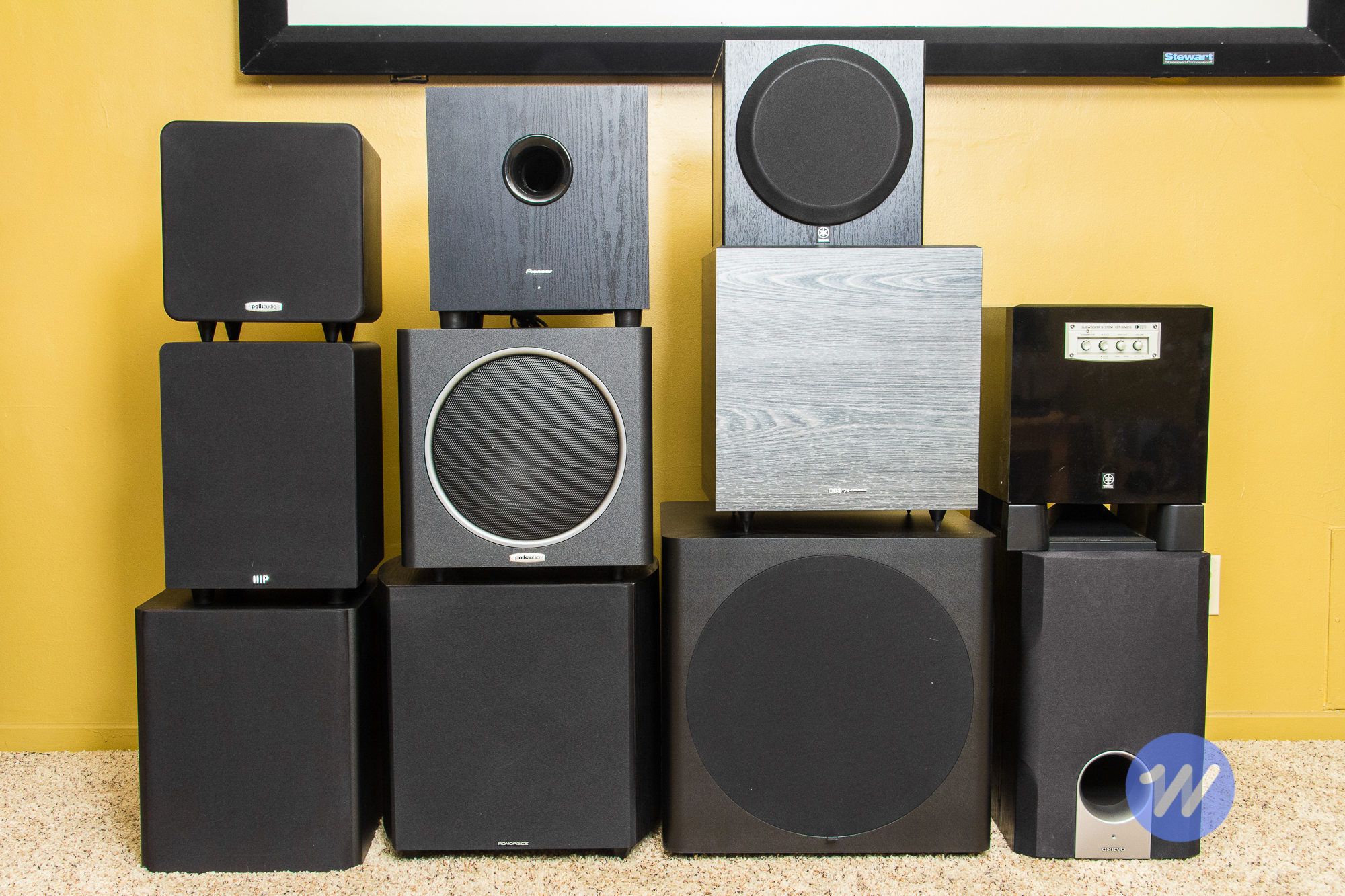 For this article, I decided to limit the maximum price to $300, which I figured was the most a casual listener would want to pay to add bass to a small system. There are few editorial reviews of subs priced less than $300, so I decided to call in as many as I could for a listening test. I scoured the top-selling options on websites like Amazon and Crutchfield, and then contacted every company that makes an under-$300 sub. In the end, I tested the 11 models pictured above, plus two additional models since this guide was first published.

Testing began with a roughly 10-hour listening session in which I auditioned all of the subwoofers in the same acoustically treated listening room I’ve used to test more than 100 other subwoofers over the past 14 years. I connected each subwoofer to my Denon AVR-2809ci home theater receiver and used a surround-sound system made up of Sunfire CRM-2, CRM-2C, and CRM-BIP speakers. I used a crossover point of 100 hertz, what you might use with a small set of speakers, and played several of the toughest bass test tracks I know of, including Holly Cole’s “Train Song,” Olive’s “Falling,” and the recording of Camille Saint-Saëns’ “Symphony No. 3 (Organ)” from the Boston Audio Society Test CD-1. I also used bass-heavy action-movie soundtracks via Blu-ray, including U-571 and San Andreas. To learn more about my test environment and the measurements I took, please see our full guide.

Next, I brought in audio experts and Wirecutter contributors Geoff Morrison and Lauren Dragan for a blind testing session. I hung a thin black drape to prevent them from seeing which sub was playing and didn’t share the subwoofers’ identities until they’d given me their opinion and ranking of each sub. They used music of their own choosing, and each of them also watched a bass-heavy action movie scene. 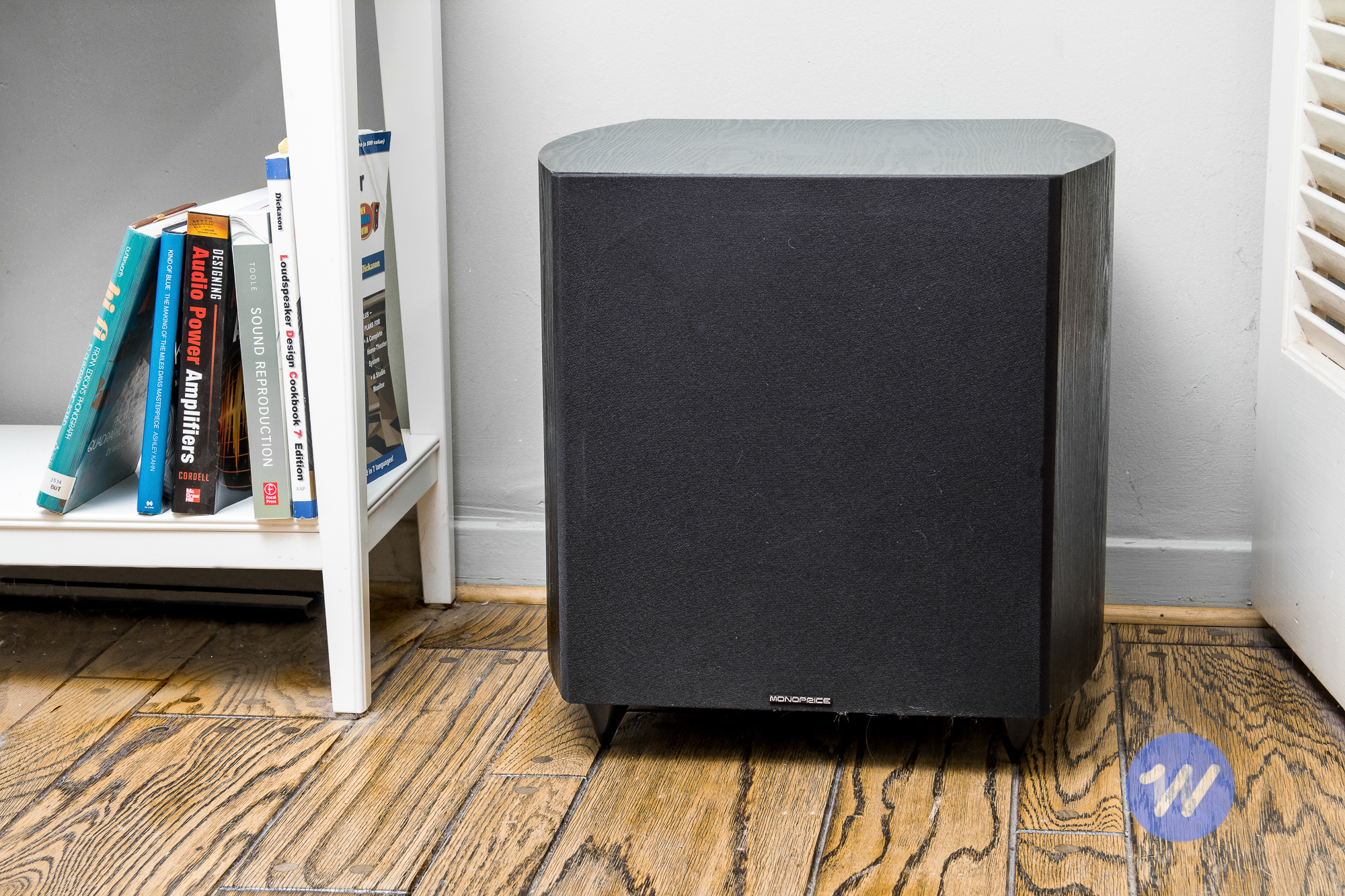 The Monoprice 9723 sounds terrific for its price, and its curved sides make it look slightly nicer than the average “big black box” subwoofer. Photo: Brent Butterworth

For both Geoff and me, the Monoprice 9723 subwoofer was not only the best value of the bunch, but also our favorite of any of the subs, regardless of price. Lauren ranked the 9723 second to the Dayton Audio SUB-1500, but when I told her the price difference and placed the two subs side by side so she could see their relative sizes, she said without hesitation that she thought the 9723 should be the top pick.

Unlike some of the smaller subwoofers we tested, the 9723 sounds like a “real” subwoofer. It adds a lot more bass and gave my system a nice full, satisfying bottom end without sounding boomy or annoying. “By far the best,” Geoff said, describing the sound much as I did.

But as powerful as the 9723 is for its price, it does have its limits. “It feels a little reined in compared with subwoofer #7 [the Dayton SUB-1500],” Lauren said when playing Kanye West’s “Love Lockdown.” This characteristic, probably the subwoofer’s internal maximum volume limiter kicking in, made the 9723 sound somewhat artificial to her.

For a subwoofer, the 9723 even looks sort of nice, with curved sides and a detachable fabric grille covering the woofer. At 17 by 17.25 by 17.5 inches, it’s not small, but it’s also not so huge that it’d be hard to fit into an ordinary living room.

Since we first posted our guide, we have learned of complaints about the 9723 in this thread on the Slickdeals site. Some users have reported receiving scuffed or damaged units, and some have complained that the subwoofer produces inadequate volume or excessive hum. To investigate these issues, we purchased an additional sample of the 9723, using a friend’s credit card and shipping address so that Monoprice wouldn’t know that the subwoofer was going to us. The purchased sample arrived in new condition, and its measured performance closely matched that of the review sample. You can read more about this test in this blog post.

If our top pick sells out 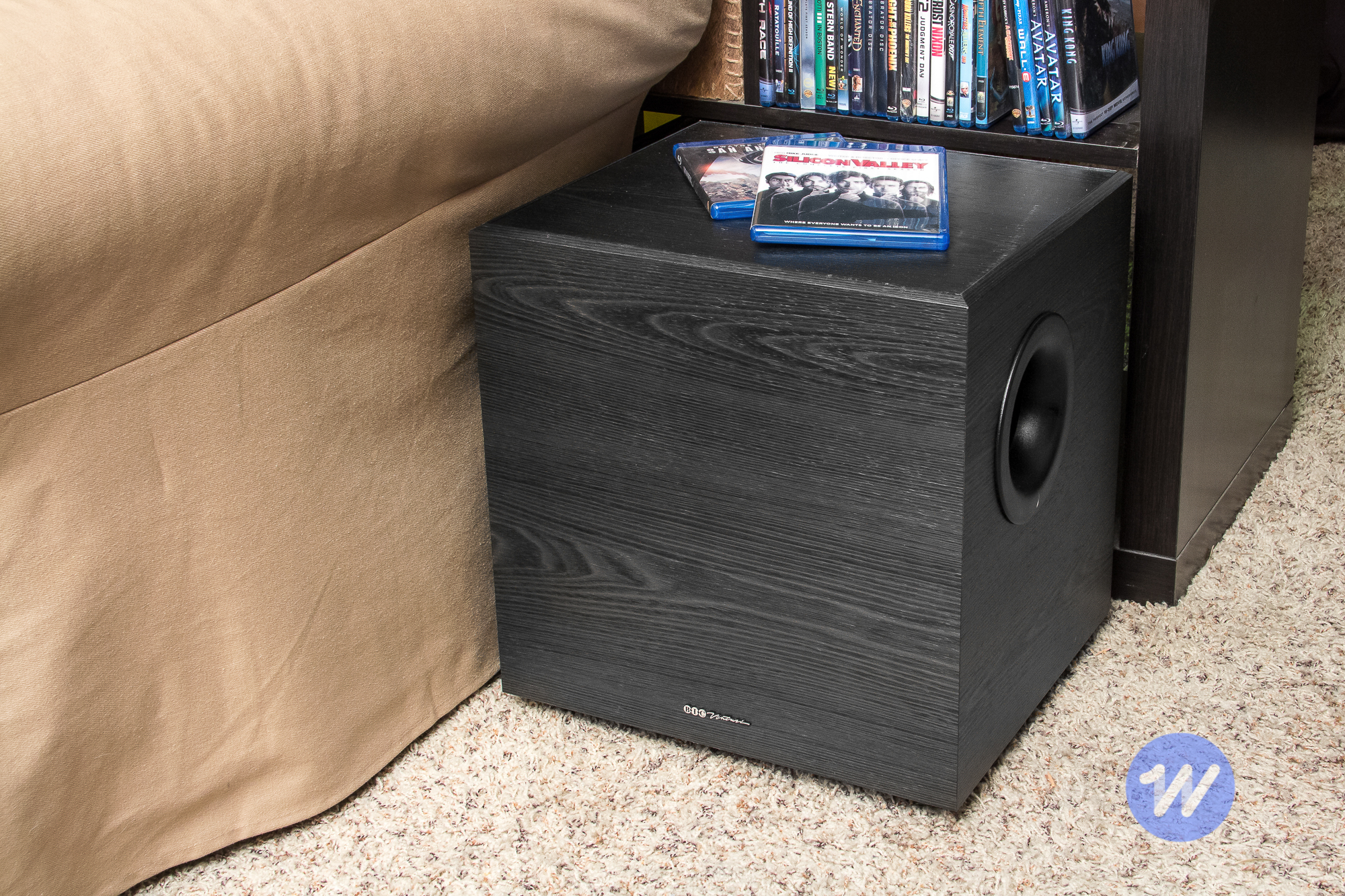 Our tests found a subwoofer that splits the difference between the Monoprice 9723 and the Pioneer SW-8MK2 (our original compact pick, which we praised for its precise, musical sound): The BIC America V1020. It has the Monoprice’s muscle and some of the Pioneer’s appealing precision. At 16.5 by 15 by 13 inches, it’s also sized between the Monoprice and Pioneer models. The 10-inch woofer sounds obviously more muscular than the Pioneer SW-8MK2’s 8-incher, and more powerful even than the Dayton Audio SUB-1000L’s 10-incher.

The V1020 has much nicer speaker cable connectors than the Monoprice and Dayton Audio models—real threaded binding posts rather than flimsy spring clips. However, it has just one monophonic (i.e., not stereo) line-level input jack, which will make it more difficult to use with a computer and powered speakers. 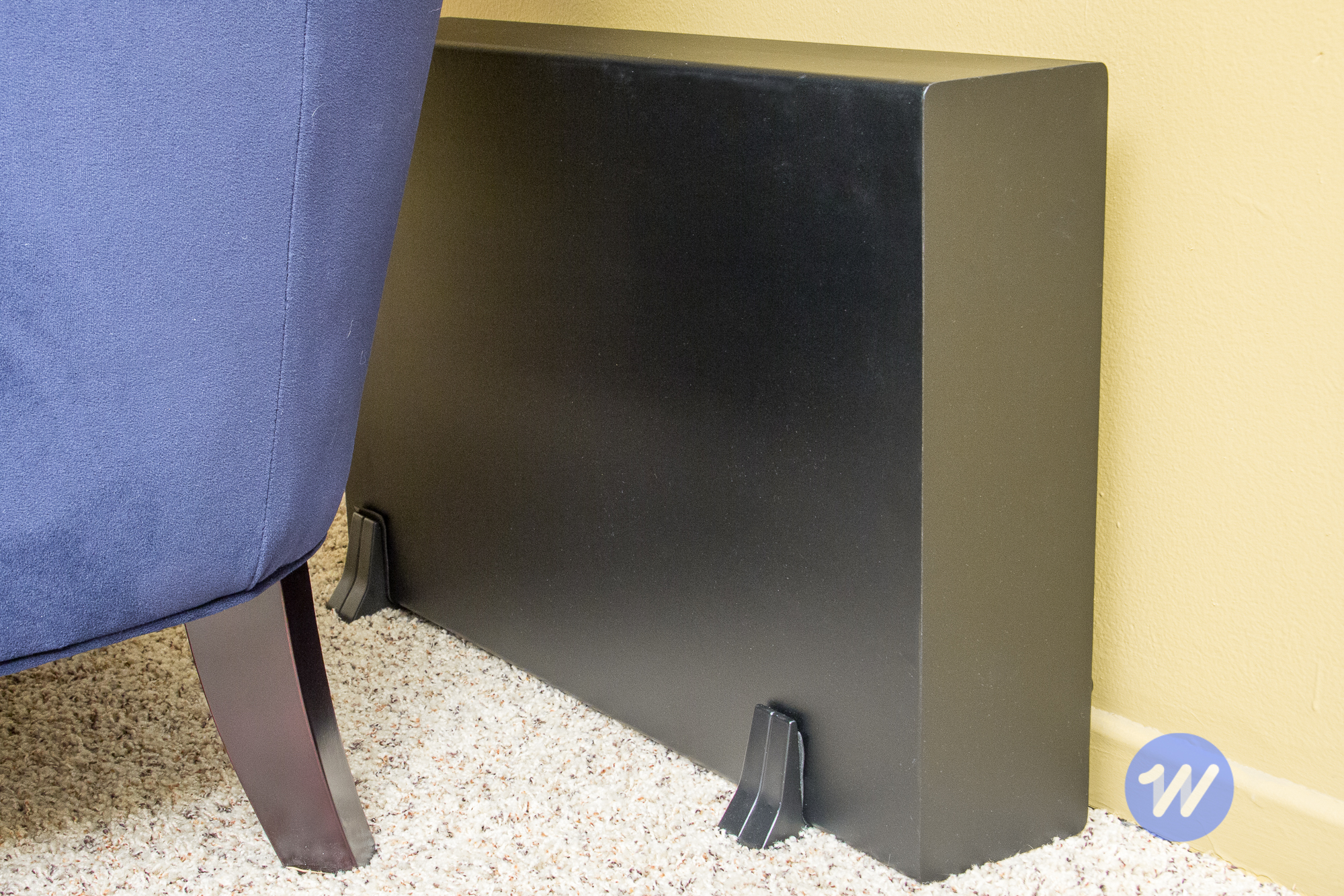 The Dayton Audio SUB-1000L measures just 6 inches thick, so you should be able to slip it behind a chair or possibly even under the couch. Photo: Brent Butterworth

Most subwoofers are blah-looking black boxes that take up a pretty good amount of space and detract from the decor of a room. The Dayton Audio SUB-1000L, on the other hand, is only 6 inches thick, so you can hide it behind or maybe even under a chair or a sofa. You can place it horizontally or vertically, and it even includes brackets that let you attach it directly to a wall.

It’s because of this well-thought-out design that we decided to substitute it for our previous compact pick, the Pioneer SW-8MK2, but the SUB-1000L was also a better performer. When we played action movies through both, the SUB-1000L had noticeable extra power on the deepest bass notes. It also sounded a little more satisfying with hip-hop and dance music, while maintaining a precise, melodic quality in the higher bass notes. It can’t match the punch, power, and clarity of the Monoprice 9723 or the BIC America V1020, but its combination of room-friendly design, sound quality, and price is available in no other sub we’ve tested.