After 10 hours of preliminary research, we tested more than 25 USB-C accessories to put together this guide to the best ways to connect peripherals and devices to a USB-C–equipped computer. It’s by no means exhaustive. USB-C can, in theory, replace every other port, and there are a seemingly infinite number of port combinations you might encounter. We focused on the most important tasks you’ll likely face, such as connecting older peripherals like hard drives and hooking up an external display.

Each type of adapter or connector we evaluated required different kinds of testing, but we were able to use some common tests across the board. Our main testing machine was a MacBook Pro (13-inch, Late 2016, Two Thunderbolt 3 Ports), with ancillary testing done using a 2016 Dell XPS 13, our pick for the best Windows ultrabook. We tested the data-transfer speed of the USB ports on hubs and adapters using our favorite flash drive from SanDisk with the AJA System Test app, repeating the test three times per device. To test USB-C–to–USB-A cables, we connected Samsung’s Portable SSD T3 (one of the fastest drives with a USB-C connection) to the Dell XPS 13 and ran CrystalDiskMark. 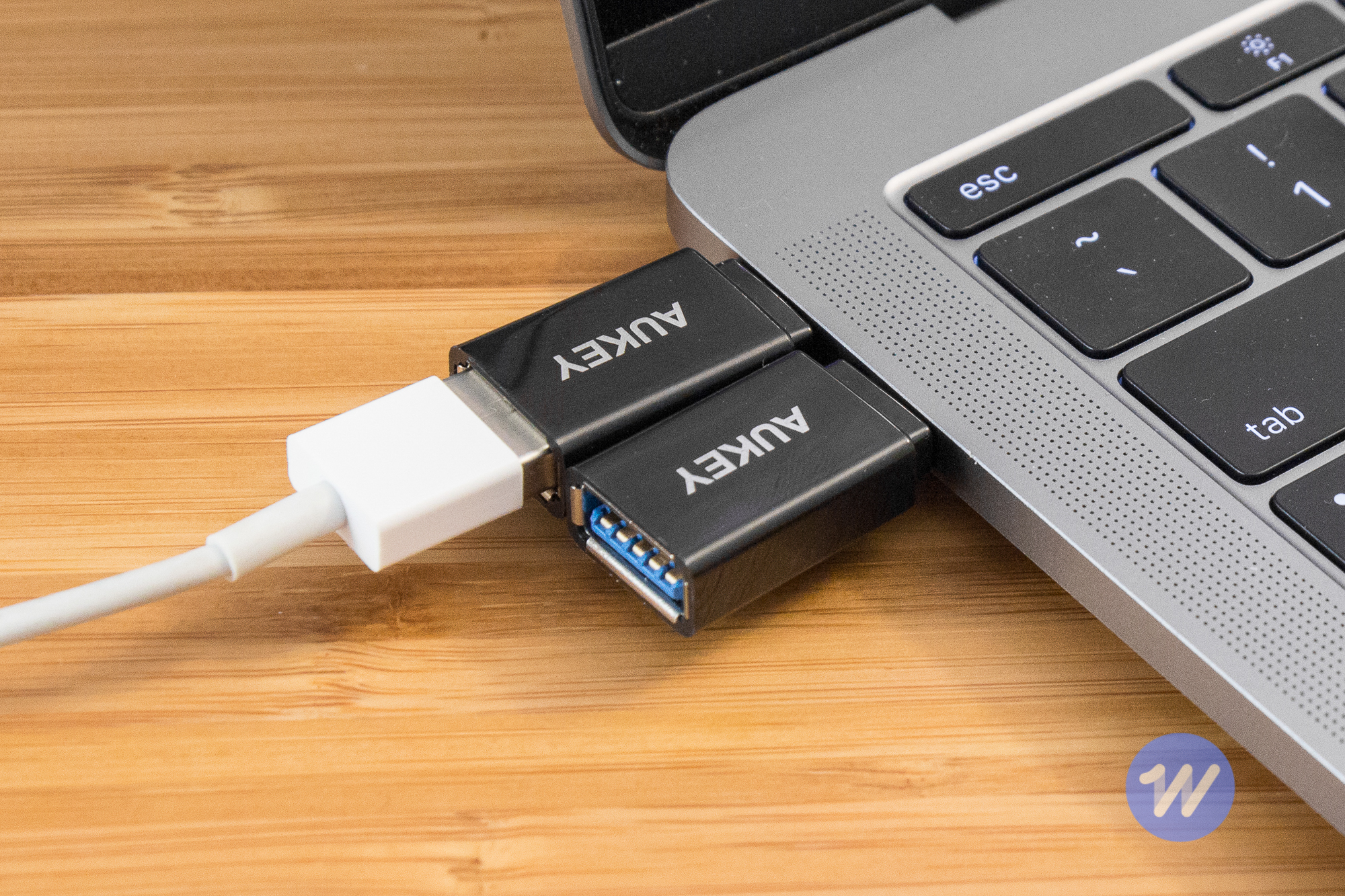 You can use two Aukey adapters simultaneously on the 2016 and 2017 MacBook Pro models, but it’s a tight fit. Photo: Kimber Streams

If there’s a single accessory most people with a USB-C–only computer will need, it’s a USB-C–to–USB-A adapter. Available as either a small nub or a short cable, this kind of adapter lets you connect legacy USB accessories, including flash drives and cables, that have a traditional USB-A plug. We tested nine adapters and found that they all work equally well. Our favorite nub-style adapter is Aukey’s CB-A1-2, available in a two-pack for less than $10. The plastic-bodied dongle is a little over an inch from end to end, about half an inch wide, and barely thicker than the USB plug that you’ll connect to it.

If you prefer a short cable over a nub adapter, go with Anker’s USB-C to USB 3.1 Adapter. The black cable feels sturdy and has solid housings at the ends. The advantage of a cable over a nub is that it moves the connector away from the computer a bit—about 5 inches in this case—which can make connecting bulkier devices without blocking other ports easier.

For video, USB-A, and charging from a single USB-C port 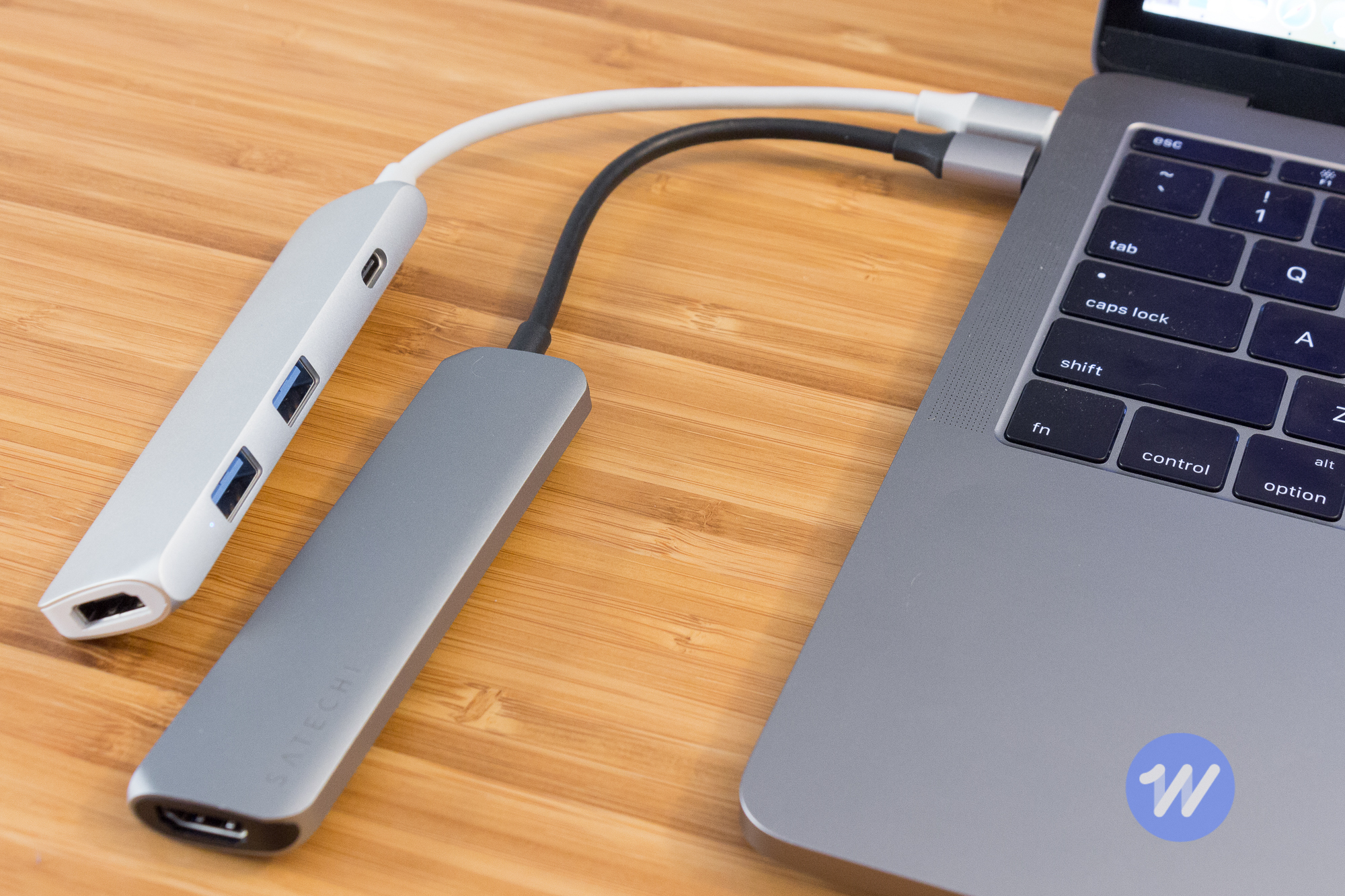 The Sanho (left) and Satechi (right) models are identical, inside and out. Photo: Kimber Streams

Our favorite adapters for adding USB-A ports, connecting to HDMI displays, and powering your computer at the same time are Sanho’s HyperDrive USB Type-C Hub and Satechi’s Slim Aluminum Type-C Multi-Port Adapter. They’re identical in every way, including design, performance, and MSRP. Each consists of a solid-feeling aluminum block that connects to your computer via a permanently attached, 6-inch USB-C cable. On one edge are two USB 3.0 ports and a USB-C port—the latter only for passthrough charging—and a single HDMI port is found on the end opposite the cable. Unfortunately, each USB port provides a maximum of only 0.45 amps to connected devices, so neither adapter is well-suited for charging devices or powering bus-powered hard drives.

For video only: USB-C–to–DisplayPort cable 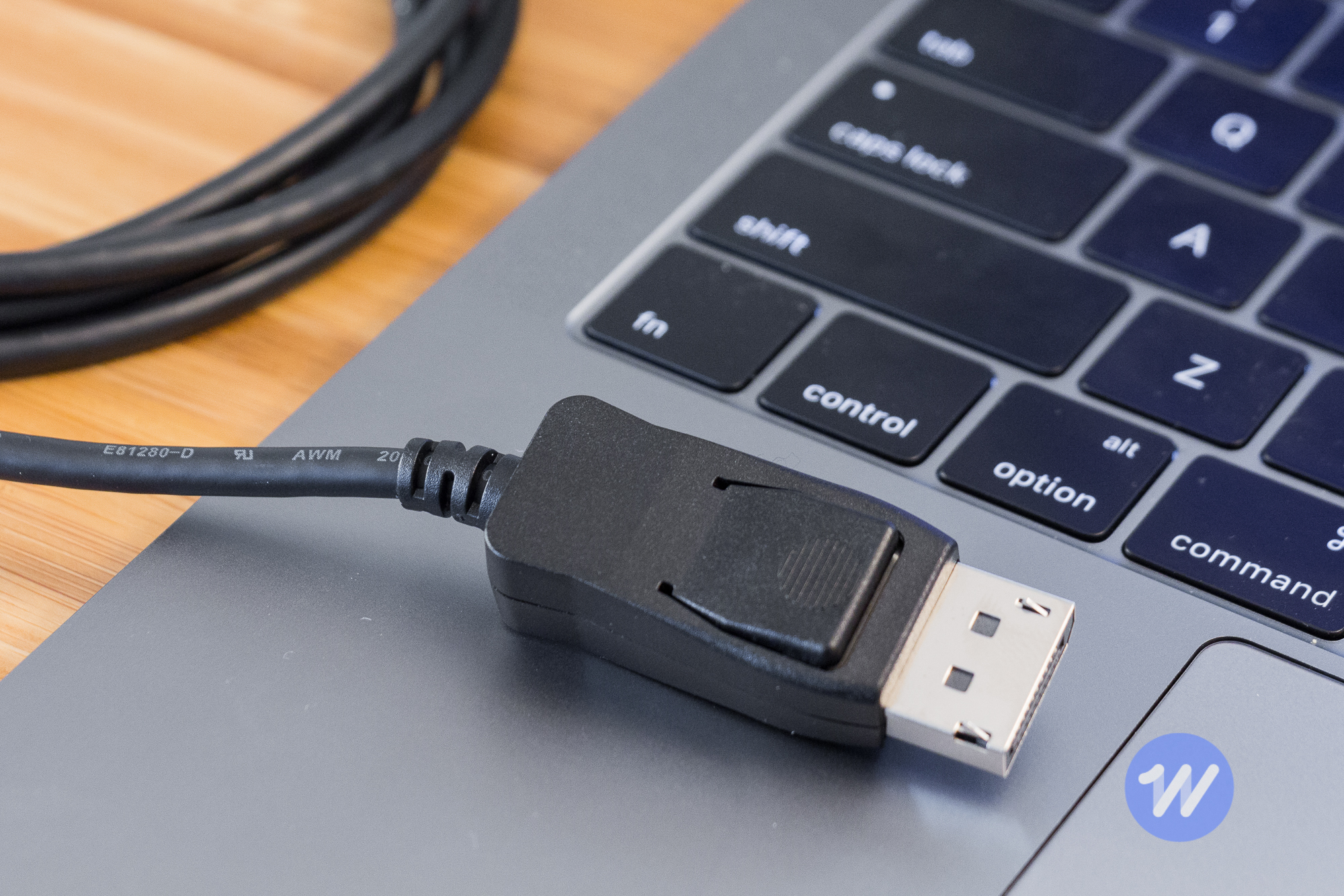 The Cable Matters USB-C–to–DisplayPort cable has a clip to keep the DisplayPort plug securely connected to your monitor. Photo: Kimber Streams

If you’re connecting to a DisplayPort-based monitor, you’ll need a dedicated cable—none of the adapters we tested include a DisplayPort port. (If you’ve got a MacBook with only a single USB-C port, you’ll instead need to use an HDMI-to-DisplayPort cable with one of the adapters with an HDMI port.) Every USB-C–to–DisplayPort cable we tested worked perfectly, offering a pixel-perfect image and full 60 Hz performance, even at 4K. That said, we recommend Cable Matters’s USB-C to DisplayPort 4K 60 Hz Cable if it’s available. It’s the only one of the three cables we tested that has a clip on the DisplayPort plug housing to hold the plug in place—you have to squeeze the clip to release the cable from the port. 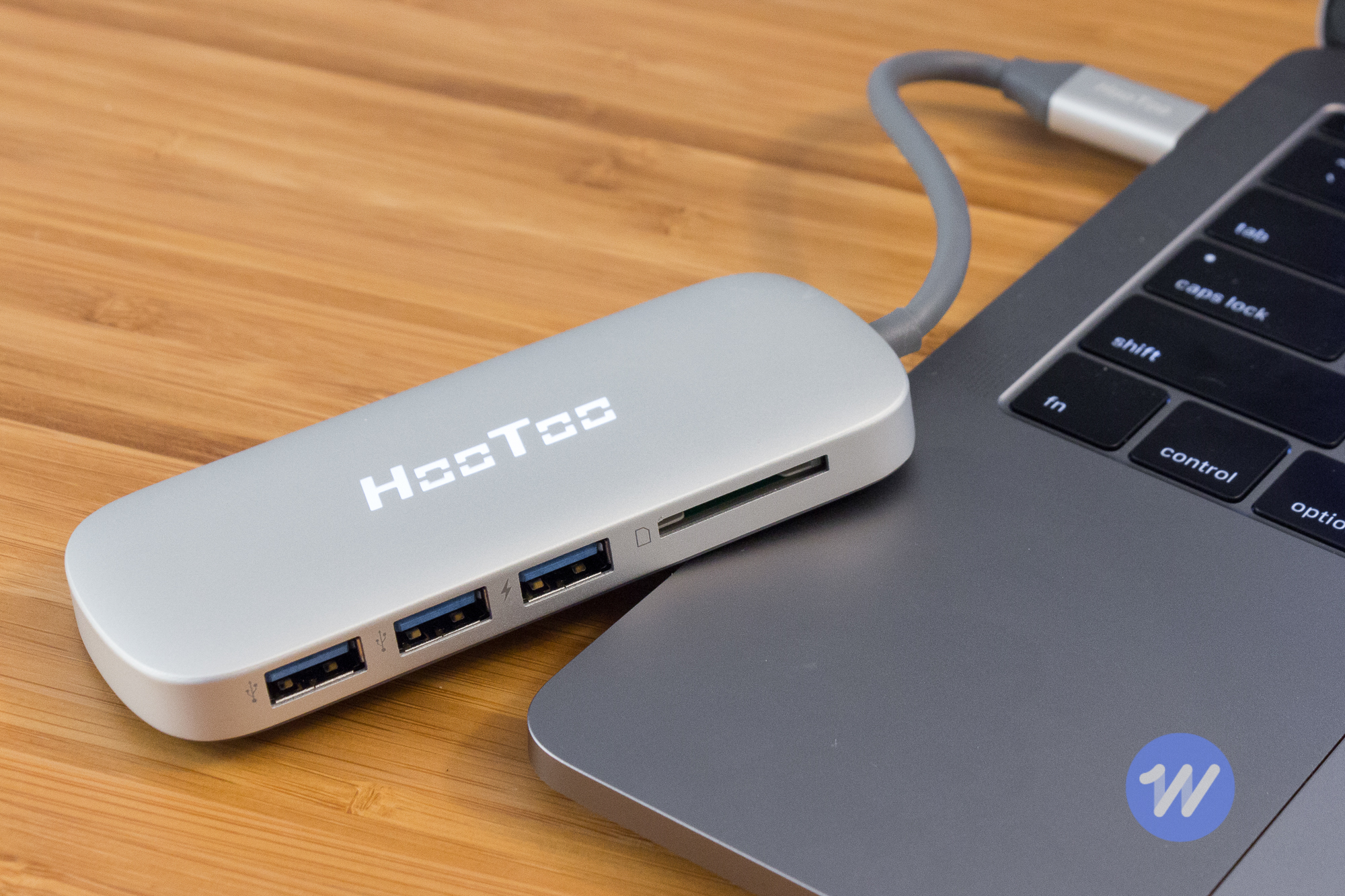 For those who don’t need video output but still want passthrough power and multiple ports for older peripherals, we like HooToo’s HT-UC004 Shuttle USB 3.1 Type-C Hub. It’s wider and thicker than the HDMI-equipped adapters from Satechi and Sanho, but a lot less expensive. In addition to a USB-C port that supports Power Delivery for passthrough charging, it includes three USB 3.0 ports, as well as an SD card slot—the latter something we didn’t consider necessary for this category, but a nice extra. However, as with other adapters, the HooToo’s USB ports provide only a disappointing 0.45 amps for charging—you won’t be able to charge phones or tablets at anything near full speed, and some bus-powered devices, such as hard drives, may not work properly.

For power and data between USB-C devices: USB-C–to–USB-C cable 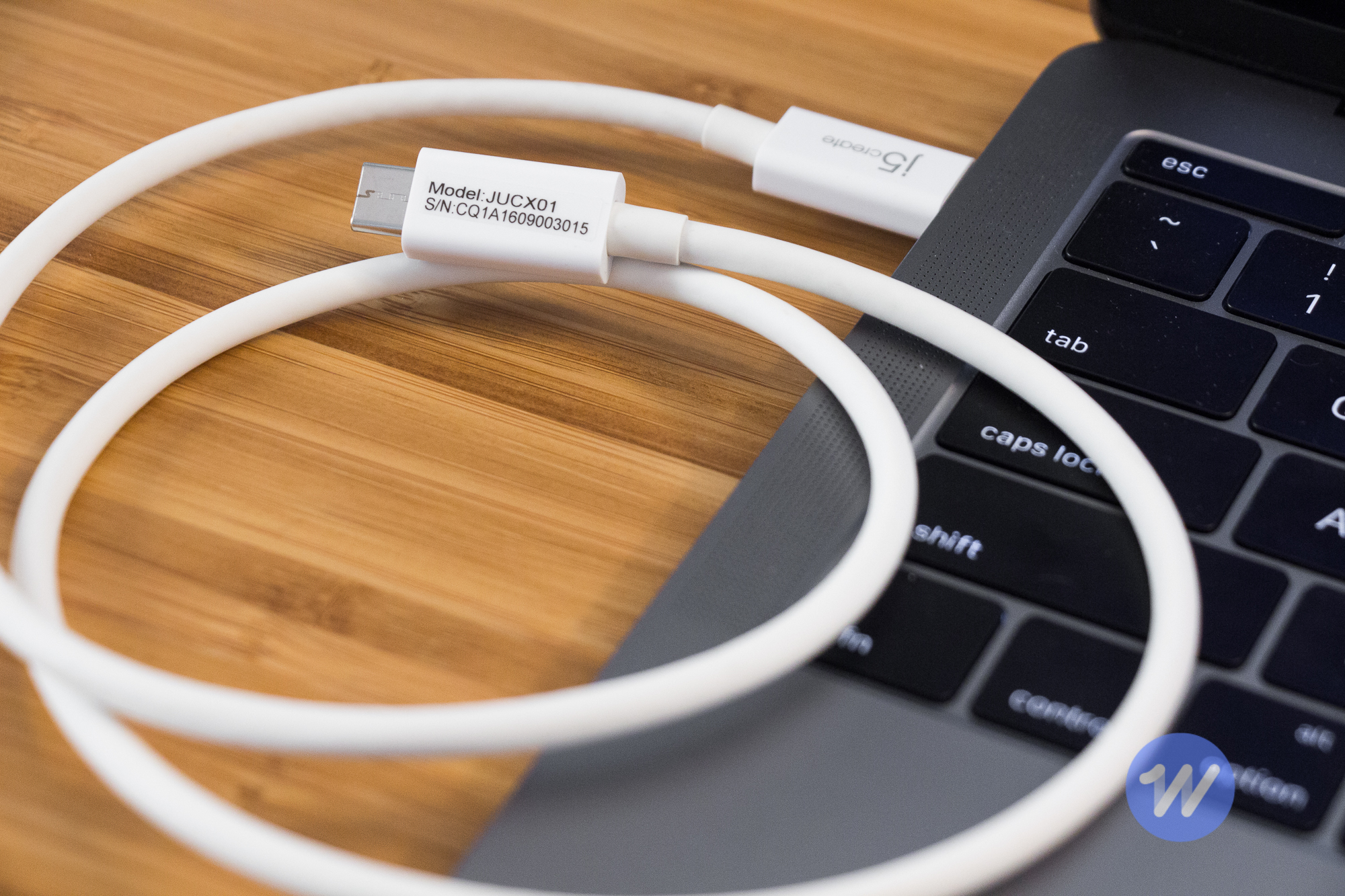 Chance are you’ll eventually need a USB-C–to–USB-C cable for charging and connecting USB-C devices. You’ll find a ton of inexpensive options, and though we’d normally lean toward saving a few bucks on cables, that’s not worth the risk with USB-C: Some cables that don’t adhere to the USB-C specification can actually fry your computer. You should spend a little bit more to get something that’s verified to work safely with your machine.

Based on the testing he and Google engineer Benson Leung have done, Nathan K., a member of Google’s Top Contributors Program and an independent USB-C accessory tester, recommends J5Create’s JUCX01 in his accessory guide, where it’s ranked “definitely get.” We tested the cable ourselves, and though our tests weren’t as exhaustive, the cable worked well for us. It supports USB 3.1 Gen 2 speeds of up to 10 Gbps, as well as 5-amp and 100-watt charging, and it’s USB-IF certified. Put simply, it will charge your computer as fast as possible (as long as you’re using the right charger) and will move data as fast as USB can. Every JUCX01 also has a unique serial number, so if the company ever has a recall or support issue, you’ll know if your cable is affected.

If you’re not concerned about moving data at the fastest speeds, Apple’s USB-C Charge Cable is a great charge cable that’s a bit less expensive than our top pick. (Just be sure to get model MLL82AM/A in a rectangular, not square, box.) It offers 5-amp, 100-watt charging (the most power USB-C is designed to provide), but supports only USB 2.0 data speeds, so it will be considerably slower than the J5Create if you’re transferring data. 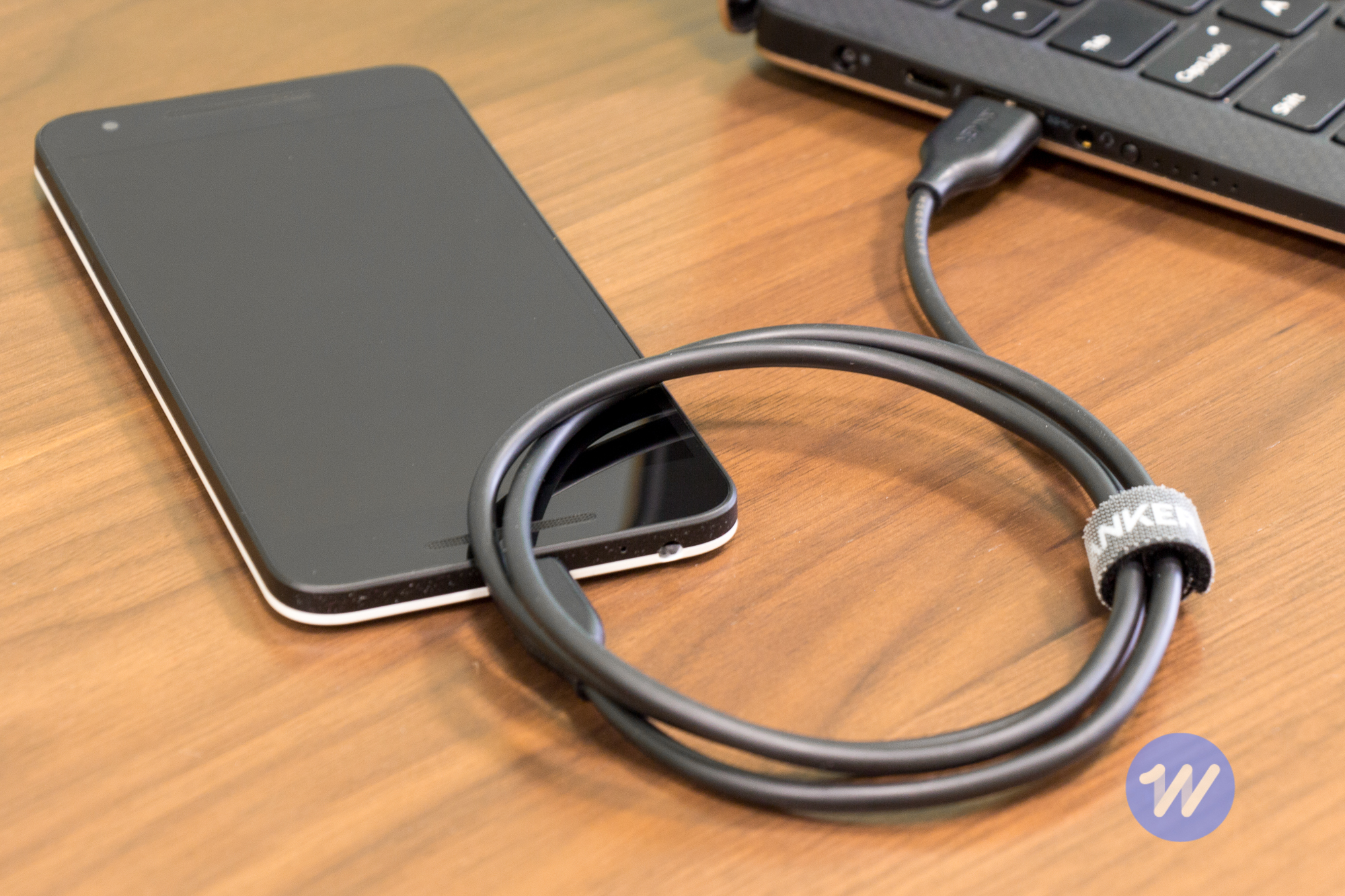 In 2015, PCWorld ran a test comparing USB-C chargers across different laptops and found that no single charger could even charge every computer, let alone charge them all rapidly. For this reason, we recommend using whichever charger came with your computer, or an adapter specifically recommended by your computer’s vendor. If it’s too difficult or expensive to replace your computer’s stock charger, we like Apple’s 61W USB-C Power Adapter because it’s widely available and works with many non-Apple devices. You can read about this adapter and our other recommendations in our guide to USB-C chargers.

For connecting to VGA projectors and displays: USB-C–to–VGA adapter 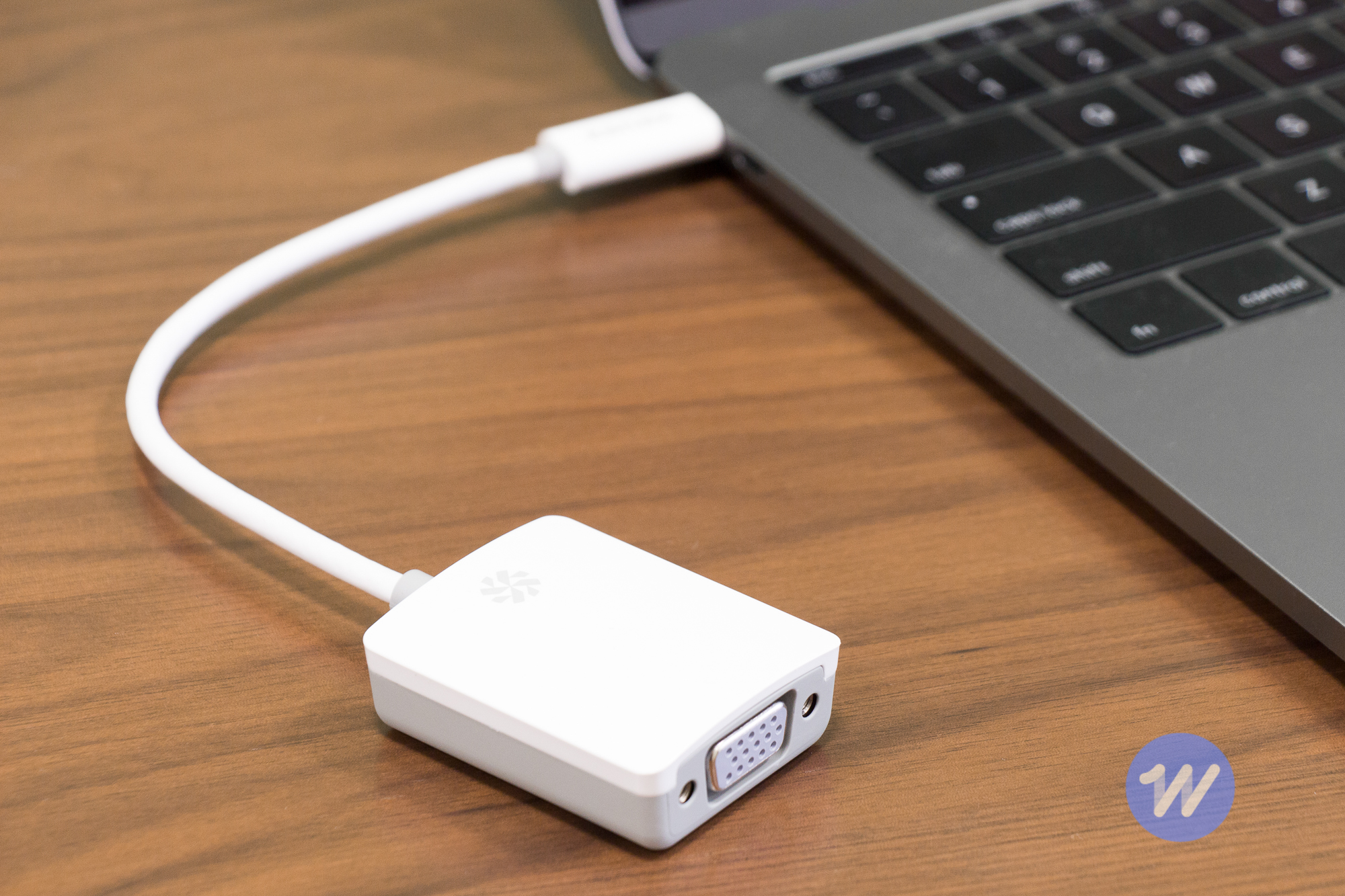 If you need to connect to a projector or an older monitor with a VGA connection, the best option is Kanex’s USB-C to VGA Adapter. All the adapters we tested worked equally well, pushing out 1920×1080 resolution at 60 Hz. The Kanex model is one of the least expensive we found, it comes from a very reputable brand, and it has the longest cable of any VGA adapter we tested—a longer adapter cable gives you more flexibility for connecting video cables, and reduces the stress those heavy cables put on your computer’s ports.

For connecting to HDMI monitors and TVs: USB-C–to–HDMI adapter 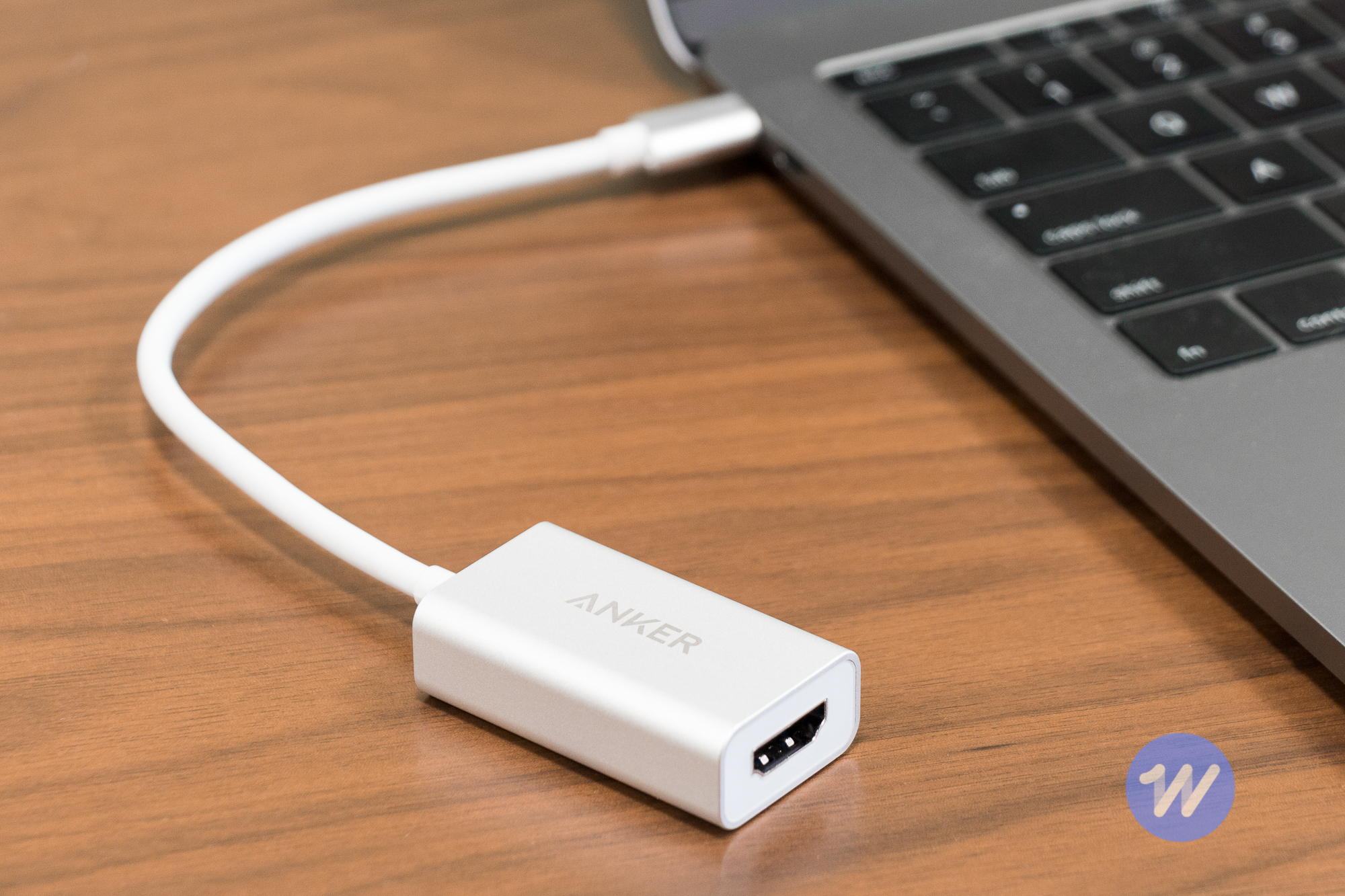 The best way to connect a USB-C computer to a high-definition TV or monitor, even at 4K resolution, is to use Anker’s USB-C to HDMI Adapter. All five of the adapters we found that promise a 60 Hz refresh rate worked as advertised. The Anker is our pick because it’s fairly inexpensive, it has a nice metal body, and it works with the 2016 and 2017 MacBook Pro. Some other models either explicitly warn that they don’t work with the newest Macs or have customer reviews claiming as much.

For connecting to legacy chargers and older computers and peripherals: USB-C–to–USB-A cable

If you’d like to connect a USB-C device to an older computer or charger that has only USB-A ports, you’ll need a USB-C–to–USB-A cable. If you’re concerned more about charging speeds than data-transfer speeds, we recommend Anker’s PowerLine USB-C to USB 3.0 Cable. Much like Anker’s Micro-USB and Lightning versions of the cable, this one features a simple design and good construction at an affordable price. We saw power draw approaching 3 amps when we plugged it into a high-amperage USB-A port, and its data speeds were on a par with every other USB 3.0 cable we tested.

At this point, very few devices support the 10 Gbps data rate that USB 3.1 Gen 2 cables can offer, so we don’t think most people need to spend the extra money on a Gen 2 cable. If you can take advantage of those speeds or would like to future-proof, we recommend Google’s USB-C to USB-A Cable. It matches the charging rates we’d expect, and though we measured read speeds of 3.49 Gbps and write speeds of 3.32 Gbps on the USB 3.1 Gen 1 Samsung T3, it’ll theoretically support faster speeds with faster devices. The build quality is also really nice: The cable is thinner than that of many other models, and the well-designed strain-relief collars should help prevent breakage over time. It even has a built-in plastic clip for keeping the cable coiled.

For connecting to DVI displays and projectors: DVI adapter

We found only a handful of DVI adapters that claim to handle 1920×1080 resolution at 60 Hz, and the best among them is StarTech’s USB-C to DVI Cable. Unlike the other adapters we tested, this one doesn’t require a separate DVI cable: It has a USB-C plug on one end and a male DVI connector on the other. In our tests, the resolution and refresh rate were exactly as promised.

If you need an adapter with a female DVI connection, Cable Matters’s USB 3.1 Type C to DVI Adapter also did well in our tests, but reviews on Amazon suggest issues with some MacBook Pro models.