I’m flying high above the San Francisco Bay, maybe 150 feet in the air. I look down and start gliding toward a dilapidated skate park below. Once I’m near the ground I pull my nose up and look level with the horizon. Spotting two trees, I race toward them, pass between them, then turn on a dime, skirting some shipping containers on my left. It’s like every dream I’ve ever had about flying, but faster.

It’s also not a dream. I take off a pair of video goggles, and I see the shipping containers come into focus, this time directly in front of me, as my eyes adjust to the sunlight. This is my third “First Person View” flight with the Draco drone, and it’s more exciting every time.

I’ve been espousing the virtues of FPV drone flying to anyone who will listen for about two years now. There’s something addictive about the virtual sense of flying. It’s not just the live video feed from the drone into your eyes — it’s the connection between your hands on the controller and the maneuvers you make. It’s not unlike the difference between being a passenger or driver of a car. Many consumer drones, like DJI’s Phantom or Mavic, work with FPV goggles but you don’t really know FPV until you’ve flown something going 70 miles an hour. The Draco is the hot rod to DJI’s family sedan.

The first time I saw the Draco was at CES earlier this year. At its simplest, the proposition is a ready-to-fly racing drone, with a crystal-clear digital video feed. To understand why that matters you have to know two things. One, racing drones are typically hand-built requiring electronics skills (and time). Two, most FPV systems (transmitter/receiver and video goggles) use analog radio. Analog works fine, but the image quality isn’t great. Draco is ready to fly out of the box and uses a digital system to beam video through to your goggles (though it can work with analog if you want).

Originally, UVify was going to release two separate drones — depending on which video system you wanted — but in the end decided to make the Draco modular. This means if you buy the analog version today (Draco SD), you can upgrade it to digital at a later date. But ready-to-fly racing doesn’t come cheap. The SD model is already $699; going digital costs an extra $200 (though the HD version is currently on sale for $799).

This is not throwaway money, but flying the Draco is just so much fun that it’s hard to explain in words alone. The first time I took it out for a spin, I was surprised at how quickly I picked it up — which is rare for a relative newbie and a racing drone. Broadly speaking, a DJI Phantom is like driving an automatic: take your hands off the sticks, and it stays right where it is. Racing quads are more like Formula 1 cars, incredibly sensitive, and if you let go of the controls, well, it’ll just fall out of the sky. The Draco has something resembling a “beginner” mode, but it still handles like a wild animal compared to a drone you might buy at Target.

That said, even on my first outing, I was able to exhaust two batteries without crashing it. I flew cautiously, but after a few minutes, I had the basics down. But it wasn’t long before an on-screen alert in my goggles was nagging me to land. That’s a universal downside of racing drones: the pitiful battery life. The Draco’s last about seven minutes at a modest pace, but that can drop to half as much if you go full throttle the whole time (and if you do, you’ve obviously done this before). 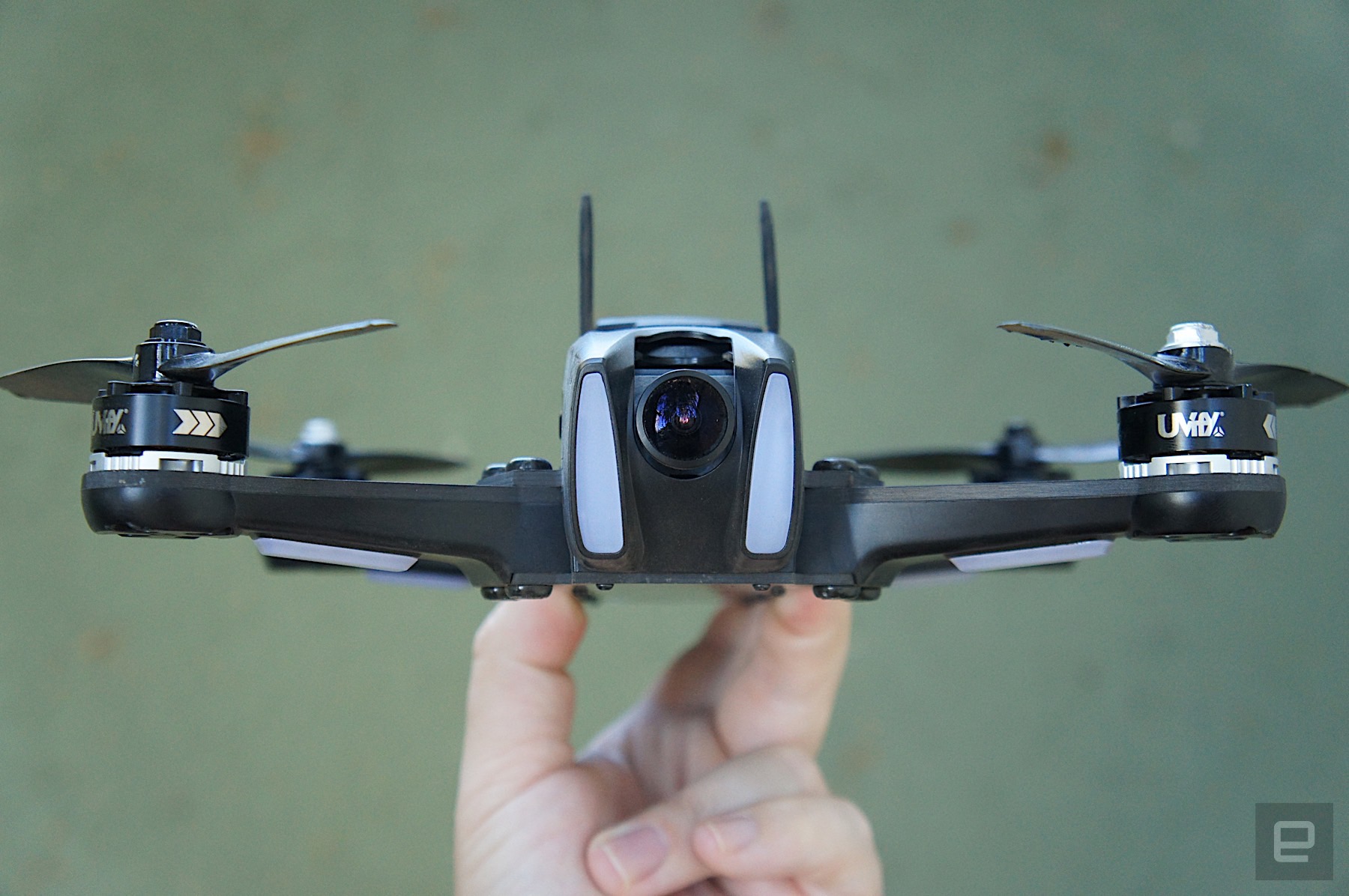 UVify isn’t the first to offer a plug-and-play entry into racing drones. The Falcore by Connex has been around for a while and, on the surface of it, offers a similar experience. Except, I’ve flown the Falcore, and though it’s also a good introduction to racing-style drones, it’s simply not as nimble or elegant as Draco. Falcore glides through the air like it’s on ice; the Draco feels tight, agile and more race-ready.

You might not see too many Dracos on the starting line at race events just yet, though. Generally speaking, being able to build your own allows for a custom ride that suits your needs and style. Plus, drone racing generally hasn’t yet made the switch to digital. That said, UVify is already taking podium positions, with team pilot Trevor Christianson (The Viking) bagging 1st in “freestyle” at the Fat Shark Frenzie in Canada. The team has also been invited to Austria for Red Bull’s Dr.one event this weekend.

There is one advantage with the Falcore: Its maker Connex is the same company that pretty much sells the de facto digital FPV kit for drones. Even UVify needs a Connex receiver for the Draco, which is another $250. Falcore costs $699 and comes with everything but the goggles.

And that’s another thing. There are FPV video goggles out there in every price bracket, but to get the 720p HD experience I enjoyed, you’ll need something with HDMI input. Fat Shark is the go-to brand, and it makes many pairs with HDMI, but the forthcoming Base HD model is made specifically for digital video. With its superior display technology, it’ll cost you another $350 if you don’t already have a set lying around.

I would definitely recommend that you do go with something like the Base HD for your goggles. Half of the magic with the Draco is the quality of the image. I spent an afternoon with friends flying a number of analog drones (including the Teal), and the difference in quality is considerable.

With the Draco, San Francisco’s sky was beamed into my eyes in the rich, bright blue it deserved, while individual blades of grass disappeared beneath the drone in glorious HD as if I were flying over a turfed treadmill. When I then switched to the Teal’s analog video feed, things looked grainy and washed out. 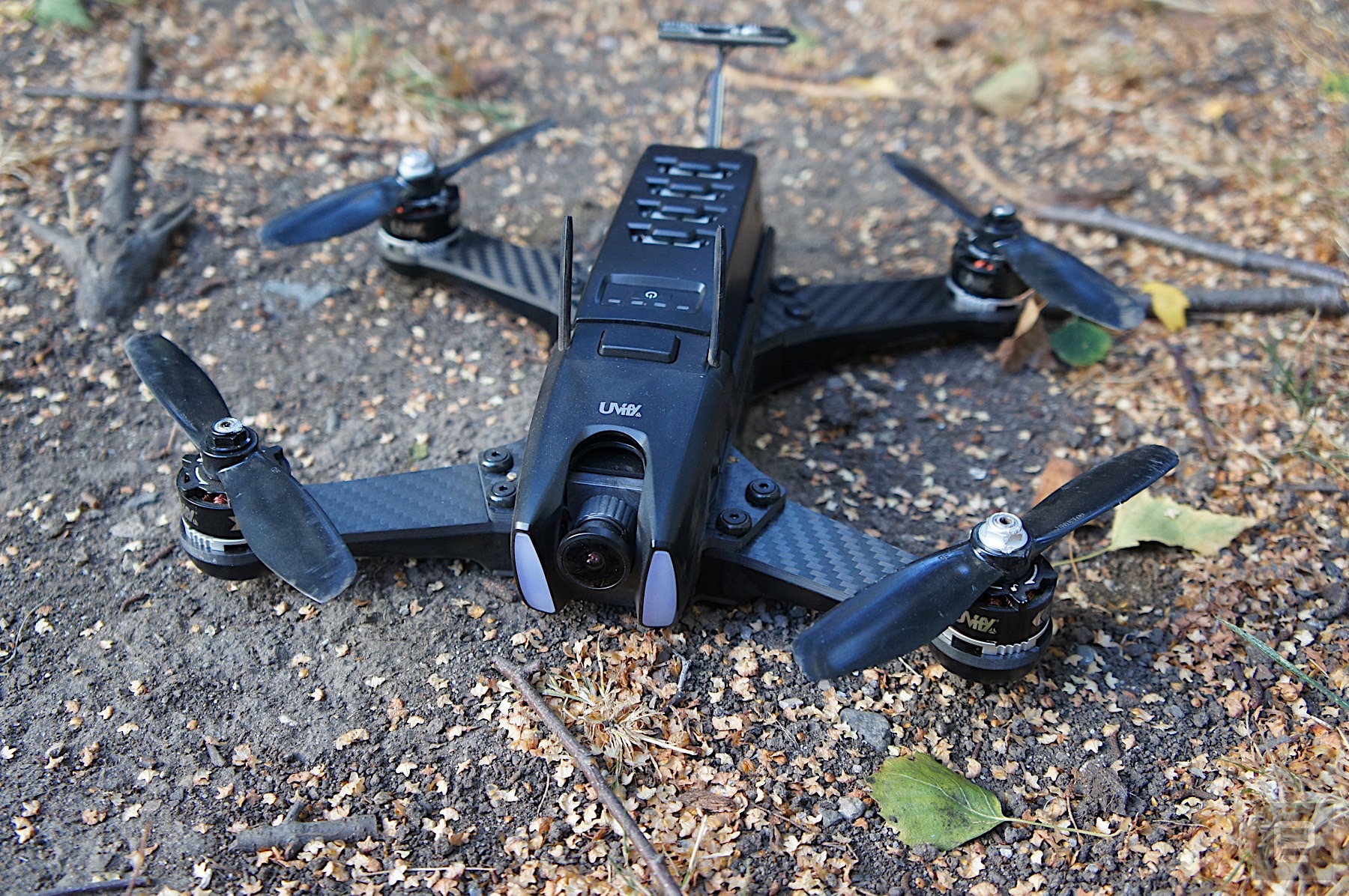 If you want a ready-to-go racing drone with an (analog) FPV camera, you can pick up something like the Vortex 250 for about $350 — almost half the price of the SD Draco. The Vortex batteries will also cost you around $30. The Draco’s cost more than twice that at $149 a pair. That’s quite a price difference, and some might argue something like the Vortex is closer to what most racing pilots use.

All in all, the Draco will cost you north of $1,300 if you want the same HD experience I had, including all the connections and the Base HD goggles. That’s a chunk of change, so what’s the real benefit? For one, it’s truly ready-to-fly (even the Vortex can need a little wrangling to get up in the air). It’s also somewhat easy to repair if a motor goes. UVify sells spare arms that you just snap in/out ($110 for two). Lastly, the digital video feed just magnifies the FPV experience, and that makes it so much more thrilling to use.

If you’re already into racing drones, the Draco might be a harder sell. But if you’re curious, and want minimal fuss to get up in the air, Draco makes a lot of sense — as long as your budget allows. For my part, as a casual flyer who really just wants the thrills and spills of high-speed FPV, Draco is a high-grade solution to getting that fix, but gosh what a fun one it is.