SNES Classic Edition review: Worth it for the games alone

The success of last year’s NES Classic Edition clearly took Nintendo by surprise. The company was completely incapable of meeting demand, leaving many people unable to buy what became the must-have gift of the holiday season. Now Nintendo has given its SNES the Classic Edition treatment and promises it’s going to build way more than it did last year.

Having grown up with the SNES (OK, we had a Sega Genesis and my best friend had SNES), it’s easy to assume that everyone knows what it is and why people are so excited that it’s back. After dominating the 8-bit era with the NES, Nintendo came late to the party with its sequel. The SNES launched in ’90 in Japan, ’91 in the US and ’92 in the UK. The Genesis had a two-year head start in almost every country, but Nintendo’s second-generation home console was worth the wait.

The SNES arrived with Super Mario World and F-Zero, among other titles. The former is regarded as one of the greatest games of all time while the latter had faux-3D graphics with fluidity and speed unseen on a console before. For the next five years or so, some special games graced the system: The Legend of Zelda: A Link to the Past, Donkey Kong Country, Super Mario Kart, Metroid, Final Fantasy III, Chrono Trigger, Super Mario RPG, Star Fox. I could go on, but essentially, short of Sonic and a few other Sega exclusives, Nintendo destroyed the competition in terms of quality, with dozens of games that have stood the test of time.

That puts the SNES Classic in different territory than its predecessor, which, nostalgia aside, featured many games that, for obvious reasons, aren’t up to modern standards. While I utterly adore Metroid, trying to introduce someone to the original today is tough. But nearly all the games Nintendo has included in its latest console are as enjoyable today as they were when they were first released.

The SNES Classic, in the US at least, comes with two controllers, a micro-USB power adapter and 21 games. I tested the UK version, which means it’s visually different (obviously I think it’s prettier, but all of my US colleagues disagree). Europeans just get a micro-USB cable, sans adapter, but all the games are the same. Pretty much any USB adapter will do the trick, for what it’s worth, and I just powered it from a spare USB port on my TV.

I love the original design of the SNES, but I’m not as enamored with the miniaturization. I’ll accept that this is a detail most people won’t care about, but I dislike the fact that the “controller ports” on the front are just for show. To plug in a pad, you have to pull down a flap to reveal the actual ports beneath. With the controllers connected, it looks a little goofy. If you’re the type who unplugs everything after use, then it’s probably not a big deal, but I’m not that sort of person at all. 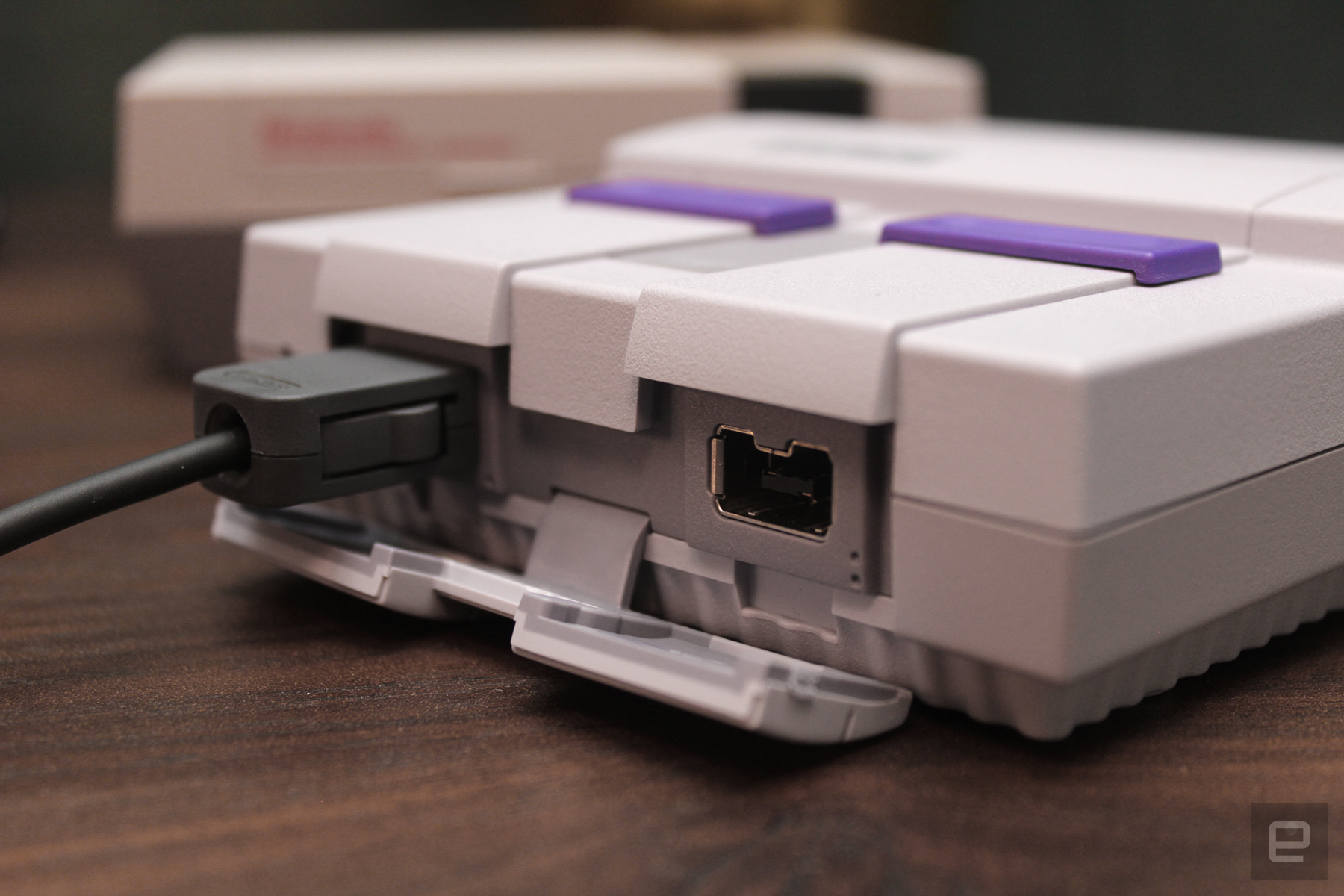 Other than that, there’s little to complain about. It’s a tiny Super Nintendo, and it looks pretty when the pads aren’t plugged in. My colleague Sean Buckley (who has been playing with the US version for our video review) tells me that the dimensions of his console “are perfect, the colors are spot on, and the power and reset buttons not only work but also feel nearly identical to the respective click and springy tactility of the originals.” Here in Europe, our power button doesn’t spring, but it does make a satisfying “click” when you slide it upward.

If you were to take a random sampling of NES Classic reviews, you’d find two issues repeated everywhere. The first was the length of the controller cables; the second, the reset button on the console itself. Only one of those has been fixed. 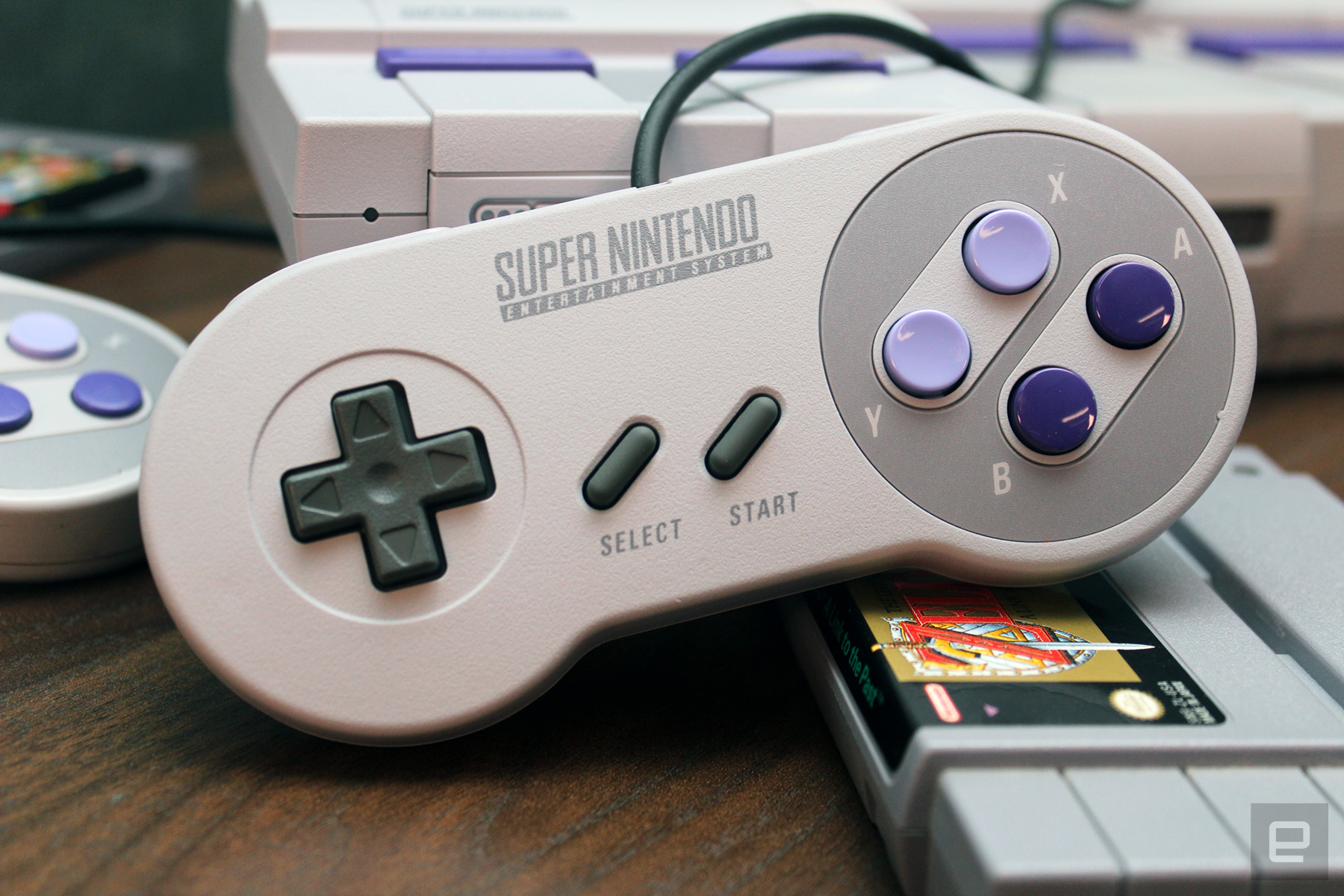 The controller is a faithful reproduction of the original. It was the best controller around at the time, and there’s nothing I’d rather play these games on. While the NES Classic controller had a tiny 20-inch cable, the SNES Classic’s has 43 inches to play with. It’s just long enough for my apartment but still probably not up to scratch for the average American living room. Still, it’s a huge improvement.

Sadly, the complaints about the reset button have been ignored. If you want to go back to the menu to change a setting or swap games, you have to get up and press the reset button. Every. Time. Of course, this exactly mimics the original experience, but this was clearly something people didn’t like about the NES Classic and it’s strange that Nintendo didn’t do anything to address it. How simple would it be to make, say, a three-second hold of the start and select buttons return you to the main menu? 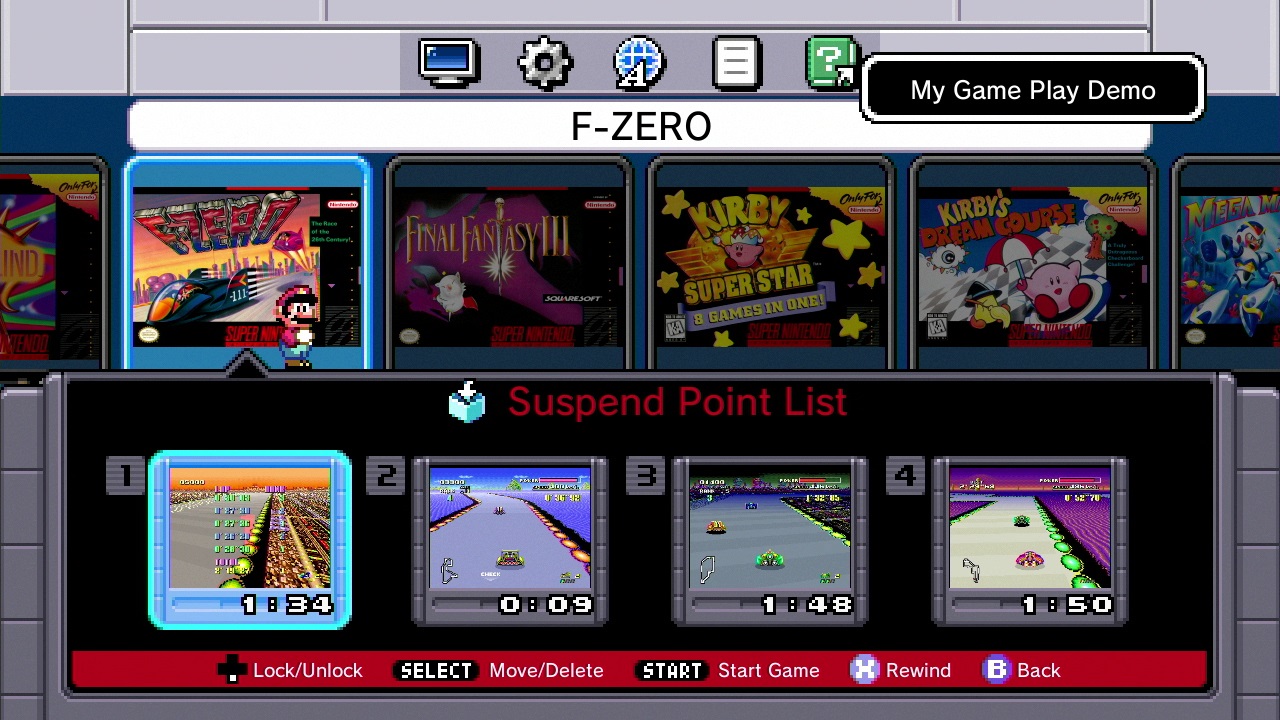 Honestly, though, I’m only annoyed for the people I know will hate this. As a kid, almost all the games I played at home were in front of a tiny TV in my brothers’ room. Then, as my eldest brother went to college and the other got a better console, I got to play games in front of a tiny TV in my room. Perhaps out of instinct, I installed the SNES Classic in my bedroom on a “tiny” 28-inch TV. It wasn’t until I was perched on the end of my bed, two feet away from the screen and an hour into Final Fantasy III, that I realized I’d unknowingly copied my mom’s ban on gaming in the living room.

I ended up moving the console to the living room the next weekend for a multiplayer session, but I put it straight back when that was wrapped. At least to me, playing this on my bed, when I know I should be doing homework (or writing this review), just feels right.

Navigating the SNES Classic is similar to its predecessor, which is to say, reset button aside, it’s a pleasure. Games are organized in a simple horizontal line of tiles that can be arranged alphabetically, by release date or by publisher. Like with the NES Classic, you get four “save” slots per game, but now you can also rewind up to 40 seconds from your save point. This sounded useful: Older games can be unforgiving, and being able to quickly save and retry after dying is neat. In reality, though, it’s cumbersome, and I barely used it outside of testing that it worked.

Having to press the reset button, navigate to the correct game and save file, and then rewind means rather than being an instant restart, you’re talking a good 30 seconds or so. Given that it’s an add-in feature and basically cheating, it’s not that important, but it does feel like it could’ve been implemented better.

One unexpected benefit of the rewind system is that your save files essentially become screen savers. If you’re at the home screen doing nothing, the system will cycle through your saves, showing you 40-second gameplay snippets right where you left off. It’s a neat feature, and on more than one occasion I was enticed to jump back into a game because I saw where I’d left off. Also, the menu music on this thing is amazing. Another hot NES Classic topic, at least among the enthusiast crowd, was the quality of emulation. The SNES Classic outputs at 720p rather than 1080p, with a choice of display modes. “Pixel perfect” displays just the pixels that the SNES would draw while 4:3 stretches them to what they would’ve looked like on a TV at the time (arguably, the way they were intended to be seen). The final option adds a CRT filter to the 4:3 mode — it’s cute but not convincing. None of these modes will fill your modern 16:9 TV, so you can either have black space on either side of your game or fill them with one of several frames.

The NES Classic was a little worse than playing the original carts through expensive upscaling hardware but way better than the various Virtual Console releases we’d seen on Nintendo’s modern consoles. The same is roughly true here. While we haven’t had time to pore over every original and Virtual Console release, Sean did some side-by-side comparisons and generally found that the emulation was more accurate than the Virtual Console versions.

Such was the impact of the SNES that it’s easy to assume that everyone knows what these games are, and whether they’ll enjoy them. For those who don’t, here’s a rough categorization of what Nintendo is offering.

If it’s not clear from the above, there are a lot of extremely good games included with the SNES Classic. I don’t love all of them, but there’s not a single game on there that someone won’t love. While the NES Classic had more games (30 in total), there was some obvious filler. This time, the 21 games on offer are all high quality, and for $80, you’re getting fantastic value. I found myself spending most of my time with Secret of Mana and Super Punch-Out, mostly because I’ve played a lot of the other games on here too recently, and, as we’ve established, I’m not a Star Fox fan. If you’re coming to this collection fresh or after an extended absence, you’re going to have a blast.

But it’s impossible to please everyone. Lots of people have lots of opinions on which games are and aren’t “essential.” I understand that Nintendo probably carefully balanced the library based on what it thought would be the most popular titles and also tried to include something for everyone. It’s pointless to complain.

Now, time to complain about the games I wish were included. You’d be hard-pressed to find a “best SNES games” list without Chrono Trigger on it, but it’s not included. NBA Jam would’ve made more sense as a sports title than Kirby’s Dream Course, and Aladdin, although not a classic, was played by basically everyone and would’ve earned some serious nostalgia points. Then there are the missing Final Fantasy and Donkey Kong Country games — sure, if you were to make me pick one game from those series, I’d pick the ones Nintendo did, but Final Fantasy II (known as Final Fantasy IV elsewhere) and Donkey Kong Country 2 would add some extra value.

I’ve been trying to think of the SNES Classic with eyes unclouded by nostalgia. It’s tough to objectively look at games that played a huge part in my childhood, but I’m certain that even if you never played the SNES, there’s a lot of fun to be had here.

Tying the reset button to the console is still an idea best left in the past. The emulation isn’t as good as playing the original thing with dedicated upscaling hardware. And the rewind feature, perhaps the big addition over last year’s console, is poorly implemented. But despite its flaws, the SNES Classic is a competent machine with some great games. I’m not going to grab one for myself, but I will pick one up for my 10-year-old. Hopefully I can pry him away from Minecraft long enough so we can play some of the games I enjoyed when I was his age.

If Nintendo were to offer even 10 of these games in an $80 bundle for the Switch, I’d recommend you pick them up. Sure, the micro-console format here is less convenient than that, but you’re still getting great games and a cute piece of memorabilia as well. If you’re familiar with the console and the games on offer here, then this review is kind of pointless. Nostalgia sells, and if you want the SNES Classic, you’re going to buy one, regardless of what anyone says.

Sean Buckley contributed to this review.