As summer turns to fall, Engadget editors are looking to indoor pursuits, whether that involves paying for smarter recipe apps, a new synth toy or some wireless headphones for that indoor treadmill.

I like to pretend I’m a stickler for sound quality. I might not drop thousands of dollars on a living-room stereo, but I’ll splurge on good audio equipment and will happily nitpick the quality of a new set of speakers. This means I haven’t remotely considered Bluetooth headphones. How could anyone willingly sacrifice fidelity just so they don’t have to spend a few seconds plugging in a cable? Based on descriptions, you’d think going wireless was the ultimate compromise.

Yet here I am, happily enjoying a pair of BeatsX in-ears. They’re not just Bluetooth headphones, they’re from Beats — you know, the brand synonymous with overwhelming bass, the brand that’s supposed to be about style over substance. By all accounts, I should have returned them and written a stern letter to Apple warning it to never do this again. What happened? Simply put, convenience happened. It’s not so much the freedom of going without cords, although that’s certainly been helpful for my workouts. Rather, it’s all the thoughtful touches that make it easier to justify grabbing the BeatsX earphones instead of my higher-quality wired set.

The easy pairing with Apple devices (it’s not so graceful for Android, unfortunately) is really just the start. For one, these earbuds just don’t… fall… out. I use the included wingtips to be on the safe side, but even without those, they hardly budge. I’ve used more than a few in-ear sets that needed constant adjustment to stay put during a run, so it’s nice to have a pair that lets me focus on, well, the run. Combine this with flat, anti-tangle cables and a big, easy-to-control remote and the BeatsX design almost fades into the background, letting the music have its moment. Also, I have to admit that I’m a sucker for the magnets in the earbuds that keep them together when not in use. The wireless connection has also been extremely solid. That last part may not seem so impressive, but it’s a minor miracle given the horror stories I’ve heard of flaky Bluetooth headphones.

Don’t get me wrong, there are nits to pick. True to form, the BeatsX sound focuses heavily on low-end frequencies with highs and mids clearly playing second fiddle (although they’re still acceptable). Although that’s not such a problem for a dance-music fiend like me — genres like drum-and-bass and trance thrive on that rumble — I wouldn’t want to own these if I primarily listened to classical violin pieces or tender folk songs.

The eight-hour battery life is okay for commuting or trips to the gym, but it won’t pass muster for a full workday. And I still feel compelled to plug them in after most uses, too, as I don’t really want to test the fast-charge feature (which offers two hours of playback in five minutes). And while the behind-the-neck cord keeps things out of my way, it’s hard to escape looking slightly dorky with the cables jutting out from my head.

This isn’t audio nirvana, then. However, it feels like the Beats team has addressed so many of the practical problems that plague Bluetooth headphones, and indeed many wired headphones, that it’s worth the investment. I’m itching for wireless audio that mates this convenience with genuinely high-quality (that is, balanced) sound, but for the $150 asking price I’m willing to accept the tradeoffs. 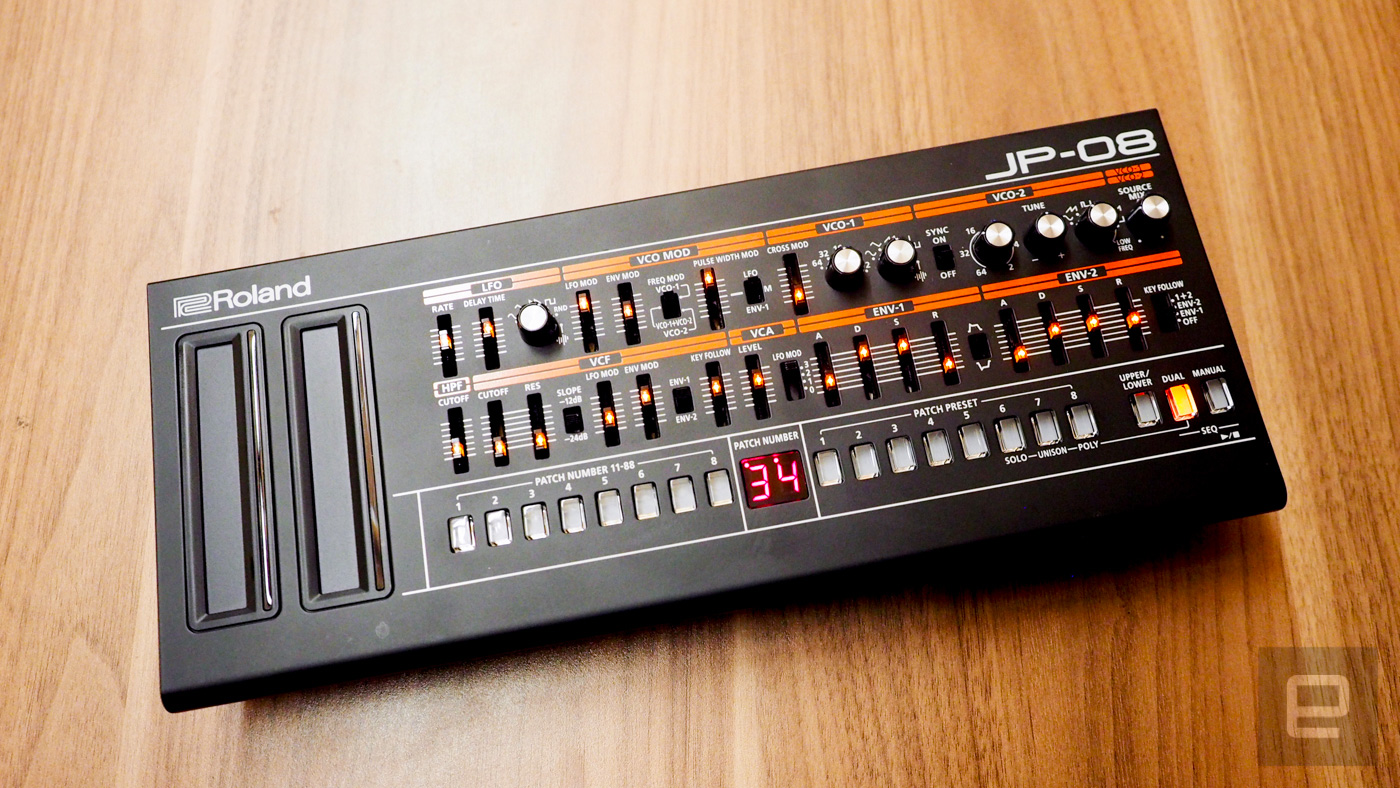 Roland has become a very dangerous company. I feel like every month a new musical instrument drops into that sweet impulse-buy spot. The Boutique collection is especially taxing on my wallet. For as low as $200, you can add a tiny synth based on a vintage instrument, another addition to the pile of instruments you swear you’re going to use to start a band or record that album. Someday.

One Roland Boutique synth in particular, the $300 JP-08, has been hanging out in my backpack and replaced my Arturia Microbrute synth at band practice. With digitally-modeled sounds using Roland’s Analog Circuit Behaviour (ACB) technology, all based on the Jupiter 8 synthesizer from the early 80s, its plethora of tones makes it a great little addition to my band.

It has two VCOs, an LFO, two envelope filters, a 16-step sequencer and supports four voices at once. That’s all controlled by the same 36 knobs and controllers found on the original Jupiter 8. The result is an impressive amount of sounds and sound manipulation from a gadget that’s approximately 12 inches by five inches.

I like it so much, I used it live at a recent show. Unfortunately, I forgot to swap out the batteries for new ones, and it turned off at roughly 80 percent into its part of a song. Yeah, that was my fault. If I was smart, I could have just plugged it into the same USB charger I use for my Android tablet. That’s fine, but it would have been nice if it accepted a standard power pack like the ones I use for my guitar pedals. Instead, I either have take a chance on batteries or use a different power supply.

Chalk it up to its low price tag, but the penny pinching has some other consequences. The JP-08 (in fact all of the Boutique brand synths) ships without a keyboard. That means some of the coolest things you can do with the synth ( like playing a sequence while simultaneously playing notes) is impossible right out of the box. Instead Roland sells its own K-25m keyboard that attaches to the unit for $100.

I’ve opted to use a random MIDI keyboard, which is more than adequate. Sadly, one of the features I wish was controlled by JP-08’s Musical Instrument Digital Interface was the ability to manipulate the tempo via button, knob or switch. The unit will time sync with other instruments, but when it’s by itself, the timing is controlled by a touch ribbon. In other words, there’s no real way to fine tune the tempo unless you’re connected to another MIDI device with that level of precision. It’s a huge pain when you’re trying to stay in time with other instruments.

Another issue is Roland’s use of mini-jack audio out instead of the standard quarter-inch audio port found on most instruments. I got around it running a mini-jack to quarter-inch cable to a pedal with true analog bypass, so it’s not a deal-breaker, but it can be irritating for musicians playing live shows.

And while I found the JP-08 a great little companion with a few issues on stage, it’s really meant for bedroom musicians. It has a tiny speaker that makes it great for sitting on the couch and noodling out parts without dragging your headphones out of your gig bag. The USB port supports 24 bit / 44.1 kHz to your digital audio workstation of choice. It’s approachable and can be nestled on a bookshelf when not in use. I’m not sure if I’ll pick up another Roland Boutique for my band, but it’s getting tougher for me to ignore the growing line of tiny synths and drum machines at pretty reasonable prices — mostly because they’re fun to play, and, really, that’s half the reason anyone buys a synth in the first place.

I’m a pretty frequent cook (I’d say avid, but I don’t actually love cooking). I have tried many, many, many different methods to organize recipes: everything from a physical binder of printouts to online organization with various hosts (Allrecipes, Pinterest, Evernote, you name it). Nothing was quite flexible or robust enough to accommodate what I needed.

Then I found Paprika (https://www.paprikaapp.com/), an app that’s widely available on most major platforms, including iOS, Mac, Windows, Kindle Fire and Android. And I can honestly say, without exaggeration, that it changed my life. It certainly changed how I cook and shop for groceries.

The trick with Paprika is that it seamlessly syncs between your devices using its own cloud service. I have it for iOS and Mac, and I’m glad that my (many) recipes aren’t taking up valuable space in iCloud. But the reason Paprika works so well is because I deal with my recipes on my computer, my phone and my tablet for different purposes. It works everywhere I need to use it. 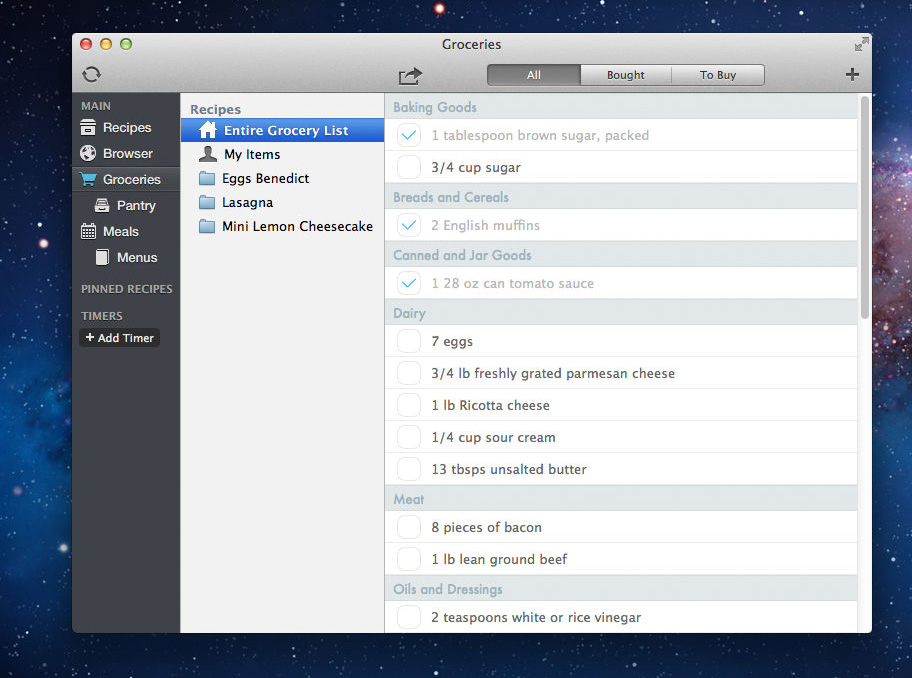 On my computer, I find recipes across the internet that look interesting, and use Paprika’s recipe bookmarklet (https://paprikaapp.com/bookmarklet/) (which I keep handy in my Chrome browser bar) to save it. It is automatically downloaded to my Uncategorized folder within the Paprika app. The best part, though, is that unless the recipe is really weirdly formatted, the app is smart enough to do most of the work for me — it can recognize what the ingredients are and what the preparation steps are. That means all I usually have to do once I’m in the app is a quick proofread before categorizing it. You can also use the in-app browser to save recipes or find new ones.

I also use the Mac app to choose which recipes I want to cook each week. When I’m in Paprika, it’s just one click to add those ingredients to my grocery list. It even separates the groceries into categories for easier shopping — though its success rate is only about 50/50. If you’re really particular, the app also allows you to input what’s in your pantry to avoid duplicate purchases.

I use Paprika on my phone mainly for grocery shopping. The app is also the only thing installed on an iPad that lives in my kitchen. It’s got in-app cooking timers (and you can have multiple going at once), which are pretty great.

Paprika also has powerful meal and menu-planning features. I’m not a meal planner, but I have used the menus feature for holidays when I’m juggling a bunch of different recipes. It’s also got a powerful search function, tagging, a rating system and a simple, easy-to-read interface.

It’s not cheap; the Mac app set me back $20, plus $5 for iOS. But when I thought about all the time and effort I’d spent organizing my recipes in multiple places, $25 seemed like a steal.

“IRL” is a recurring column in which the Engadget staff run down what they’re buying, using, playing and streaming.