After spending nearly 30 hours researching immersion blenders, considering 57 models, interviewing two soup-making pros, and then testing some of the blenders over two years (including pureeing gallons of soup, smoothies, salsa, and mayonnaise), we’re confident that you can’t buy a better immersion blender than the Breville Control Grip. It produces smoother textures than any other model we tried. Smart design features, such as a grippy handle, no-suction gasket, and a wider range of speeds, make it far easier to use than the competition.

It’s worth investing in an immersion blender if you make pureed soups. “If you’re pureeing a soup, you could use a blender or a food processor, but an immersion blender just makes it one pot cookery,” the Culinary Institute’s Rudy Speckamp told us, because it’s easy to puree soup directly in the stockpot. Immersion blenders also work well for small batches of mayonnaise, smoothies, pesto, or even baby food.

An immersion blender won’t work for heavier tasks or make the smoothest texture. A food processor, with its various blades and disks, works best for most chopping, dicing, or shredding, and a full-size blender makes much smoother purees and smoothies. 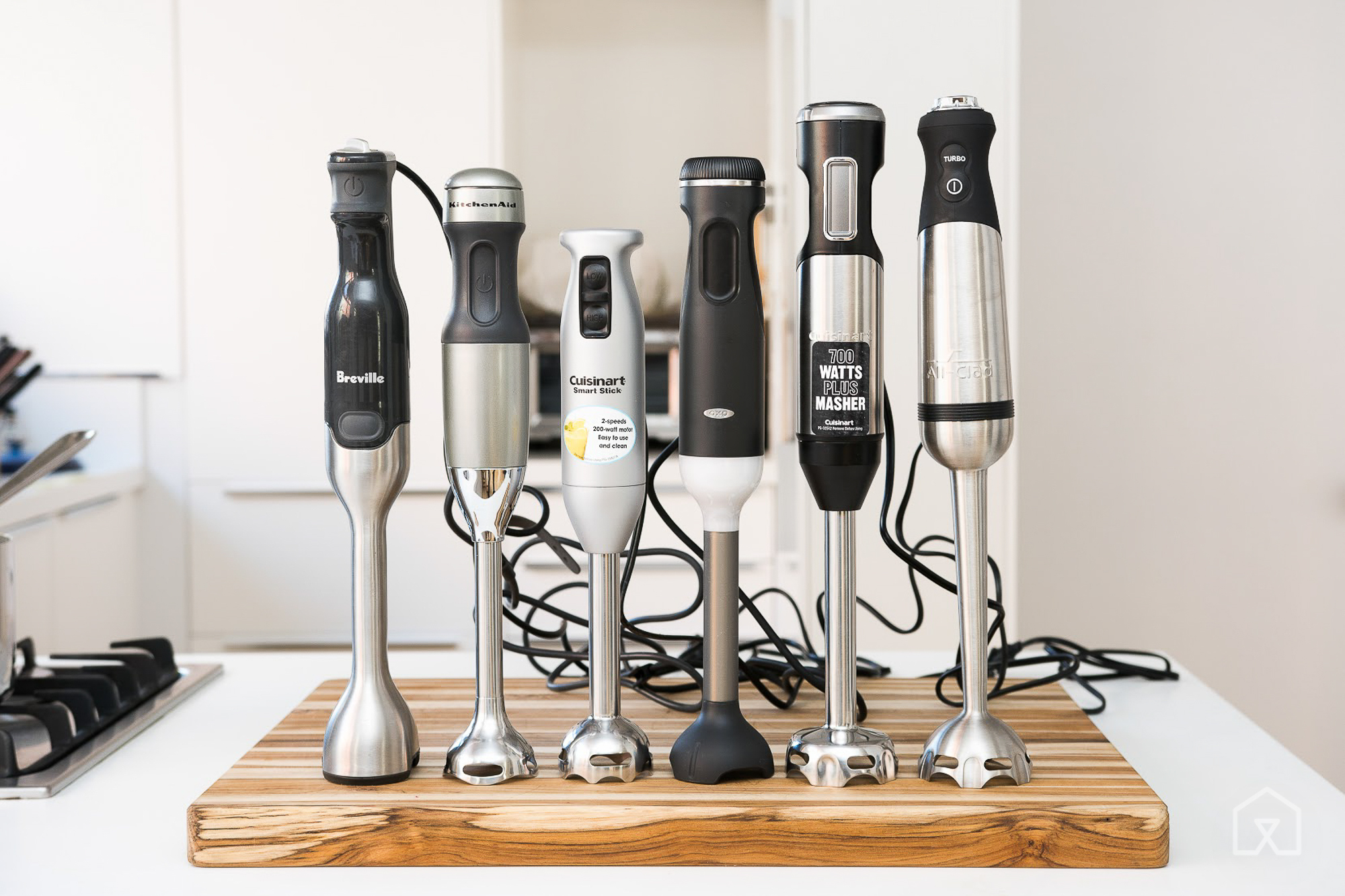 For our 2016 update, we looked at three new models: the OXO On Illuminating Digital, Cuisinart CSB-100, and All-Clad KZ750D. We tested these against our previous picks: the Breville Control Grip, KitchenAid 3-Speed, and Cuisinart Smart Stick. Photo: Michael Hession

An immersion blender’s motor needs to have enough torque to create a vigorous vortex so that food circulates in the mixing vessel and passes through the rotary blade multiple times. “If there’s a lot of movement, that’s good,” said Volker Frick, the former executive chef at Kettle Cuisine. “How deep does [the vortex] go? And how quickly does it spit it back up?” An effective vortex will create a smooth puree; a subpar one will leave stringy or chunky bits in soup or smoothies.

Nicer consumer immersion blenders have removable blending wands. For some, this allows you to put the wand in the dishwasher for easy cleanup and to connect different attachments (such as a food chopper or whisk). Higher-end models and those made for commercial use tend to have wands that don’t come off.

For this update, we tested six models–three new models from All-Clad, OXO, and Cuisinart, and three of our former picks from Breville, KitchenAid, and Cuisinart.

We tested each immersion blender by pureeing kale and almonds with frozen raspberries and peaches to make smoothies. We also pureed batches of fibrous parsnip-ginger-almond soup directly in a pot and timed approximately how long it took to reach a smooth consistency. We strained both the smoothie and soup through a fine-mesh sieve to see how much pulp was left over.

We also made small batches of mayonnaise to judge how efficiently the immersion blenders could emulsify, noting how easy they were to hold with one hand while pouring oil with the other. If the blender came with a chopper attachment, we diced a single onion to judge whether the machines could make an even chop without pulverizing it. 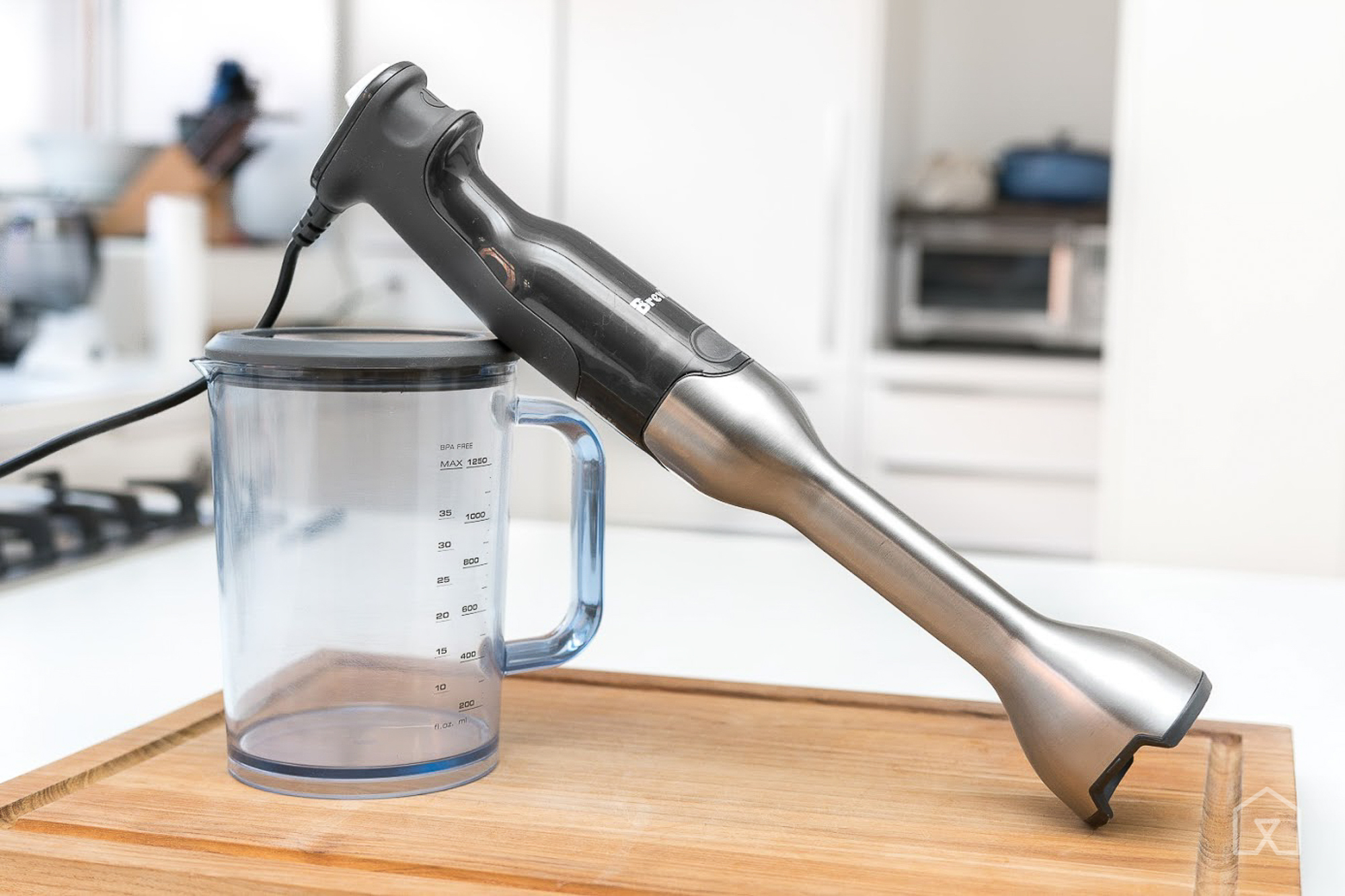 Though it’s on the pricier side (it’s currently about $100), we think that because the Breville Control Grip Immersion Blender is so much easier and more pleasant to use than other hand blenders, it’s more likely to get regular play in the kitchen. It processed the smoothest texture of all the blenders we tried and did it quickly. Rubber grips on the handle and a control button make it more comfortable to hold. It’s one of the only models we tried that didn’t suction to the bottom of a pot or mixing cup. The Breville’s 1,250-milliliter (42-ounce) cup is more than double the volume of cups from the other blenders we tested—enough for two smoothies. Its wider range of speeds and well-thought-out attachments also elevate it above the competition.

In addition to blending well, the Breville was the most comfortable to use, so it was easier to process things that took a few minutes. The pulse button and parts of the handle are covered in rubber, so they’re easy to grip. The Breville seemed to require less torque when moving around a pot of soup than other models.

Though not a necessity, the Breville comes with a selection of high-quality attachments, including a mini chopper, whisk attachment, and a guard for the blade. We’ve appreciated that guard over the past few years, as it makes stowing the blender in a utensil drawer without risking slicing a hand easier. 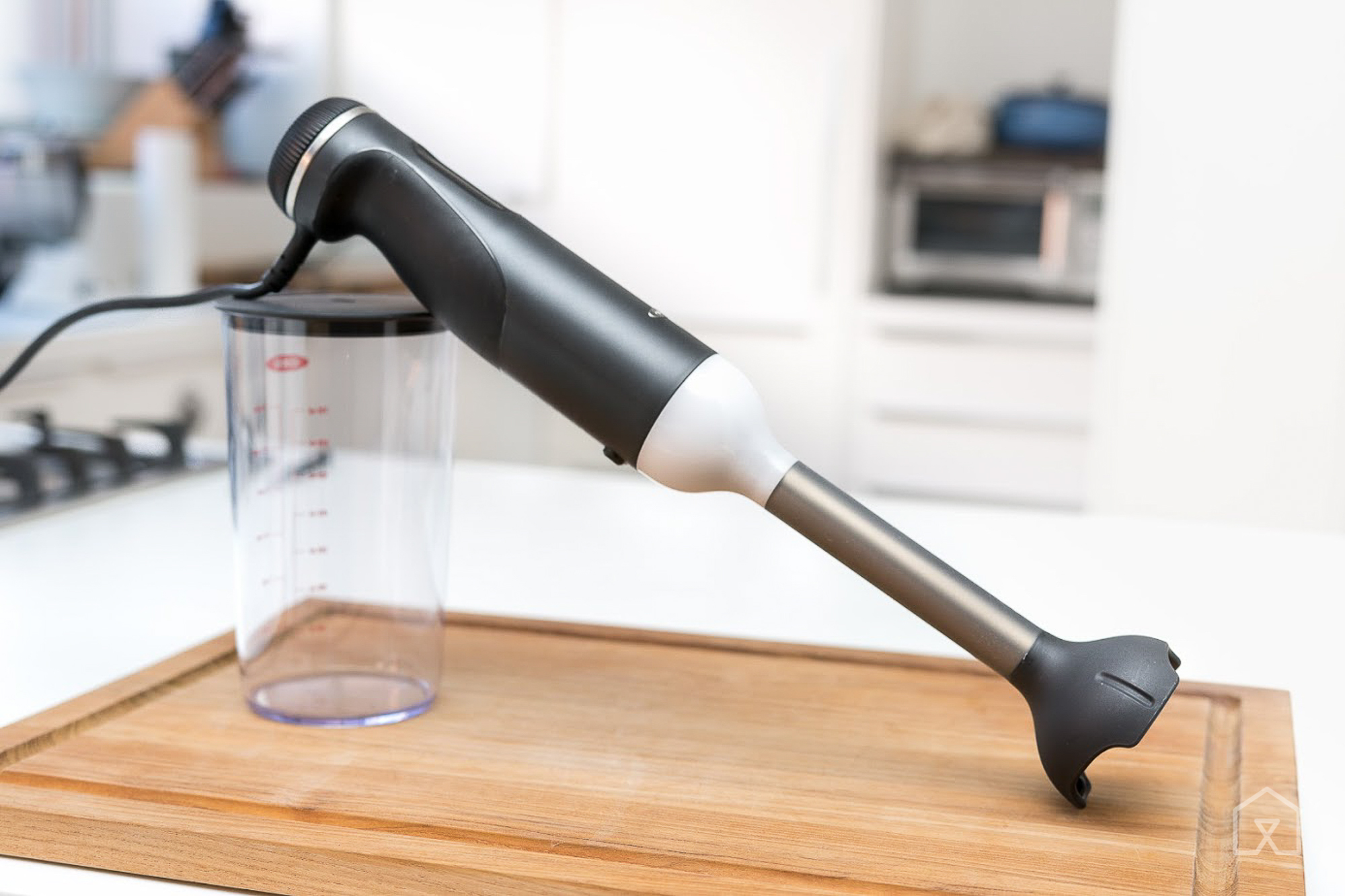 The OXO On Illuminating Digital Immersion Blender was one of the fastest models we tested. Photo: Michael Hession

We think that the Breville is much easier to use and that it will make you a happier cook in the long run, but we recommend the OXO On Illuminating Digital Immersion Blender as a decent runner-up. It doesn’t blend quite as smoothly as the Breville and it has trouble with fibrous ingredients like ginger, but it makes decently smooth purees quickly.

Because this model doesn’t come with attachments besides a 700-milliliter (24-ounce) cup, we recommend it for the minimalist who’ll use it mainly for pureeing soups and smoothies or making mayo. Its nylon cage can withstand high heat and won’t scratch delicate cooking surfaces. The silicone coating on the stick allows you to tap off excess food on the side of a pot without creating nicks and dings. It even comes with a two-year warranty. 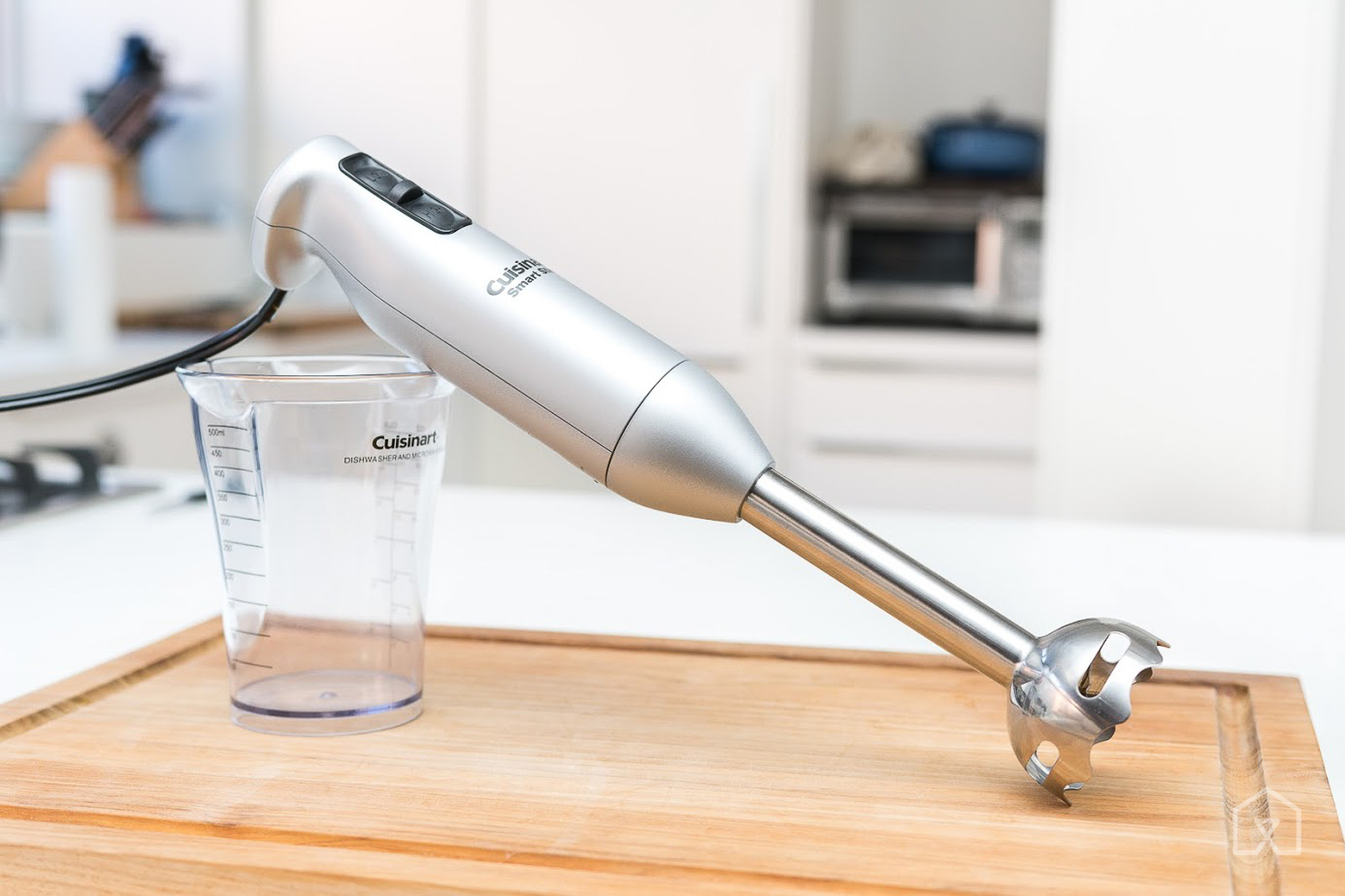 Though the Cuisinart Smart Stick can’t achieve perfectly smooth purees, it does a decent job for a fraction of the price of the Breville or OXO. Photo: Michael Hession

At about a third of the price of the Breville, the Cuisinart Smart Stick CSB-75 is a surprisingly efficient blender if you don’t mind a slightly chunkier puree. To be clear, we’d still invest in the Breville for making daily smoothies or regularly pureeing soups or sauces. It might be three times as expensive, but it’s also three times the machine. But if you’re planning to use an immersion blender once a month or less, the Smart Stick makes a solid choice.

The Smart Stick blended soup on a par with the Cuisinart Smart Stick CSB-77, the KitchenAid 3-Speed, and the KitchenAid 5-Speed, which cost almost twice as much. And it makes a pretty good smoothie, though it left behind pieces of ginger and parsnip after pureeing soup.

The Smart Stick CSB-75 does feel cheap compared with the other models we tested, and we found that its plastic casing trapped food in the seams. Overall though, it’s adequate. If you’re planning to use an immersion blender only on rare occasions or you’re not quite ready to commit to a more expensive model, we think this is a great choice.

Read more from News
← How to install Android apps on your Windows computer, the easy way
After Math: We’re on our own →