How to install Android apps on your Windows computer, the easy way

Apps on Windows have gotten better. But every once in a while, you stumble upon a really useful mobile app that hasn’t made its way to PC yet. If runs on Android, though, there’s good news. With the help of third-party software, you can probably run it on your Windows computer.

Unfortunately, getting apps from your phone or tablet to your PC isn’t as easy as installing a Windows program. To help simplify things, we’ve compiled a comprehensive guide on what software and utilities you need to install Android apps on almost any Windows computer.

Android emulators and how to use them

One way to run Android apps on a Windows computer is by using an Android emulator. Emulators run on complicated code, but the basic gist is this: They enable one computer to behave like another. Android emulators make your Windows machine appear as though it’s an Android device — right down to the processor, cameras, and sensors.

Android emulators act as hardware go-betweens, supplying apps with the memory, processing power, and storage they need to run on most any Windows computer. They map Android device hardware to your computer’s peripherals, too. You’ll hear an app’s sounds and music through your computer’s speakers, and chat apps like Skype will recognize your computer’s microphone and webcam.

Depending on your hardware, in fact, your computer might run Android apps better than your phone or tablet.

Perhaps the biggest benefit of Android emulators, though, is that they behave like regular Windows programs. You can launch them from the Windows desktop or start menu, and once they’re up and running, you can resize them, minimize them, maximize them, and move them wherever you please. 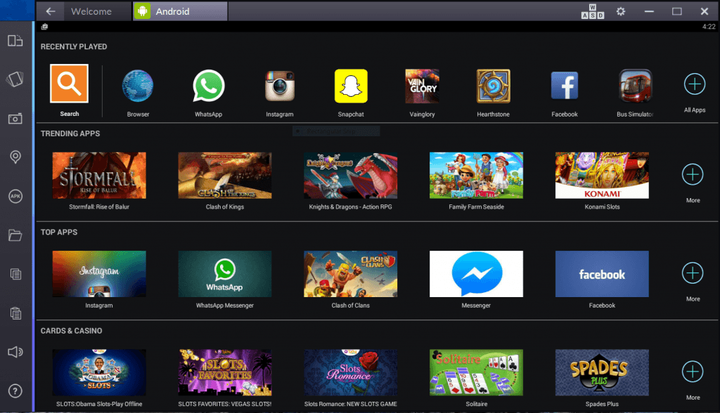 The Bluestacks App Player is one of the most robust Android emulators around. It boasts a custom-designed interface that makes it easy to toggle emulation settings and launch apps, and “Layercake” technology that uses hardware accelerators to improve the performance of Android games in Windows.

It’s important to note that while Bluestacks is free, an optional subscription($2 per month) enables premium support and exclusive offers from app developers.

Installing Bluestacks couldn’t be easier. Because it’s entirely self-contained, you can install it just like any other Windows program.

Here’s how to install Bluestacks to your computer’s hard drive:

Bluestacks packs controls that are unique from other Android emulators.

A control sidebar on the left-hand corner of the screen is where you’ll find most of what you need. There’s a toggle for switching the Android window’s orientation from portrait to landscape, a screenshot tool, and a shortcut to the Bluestacks file transfer application, which lets you copy files from your desktop to Bluestacks’ virtual device’s storage. 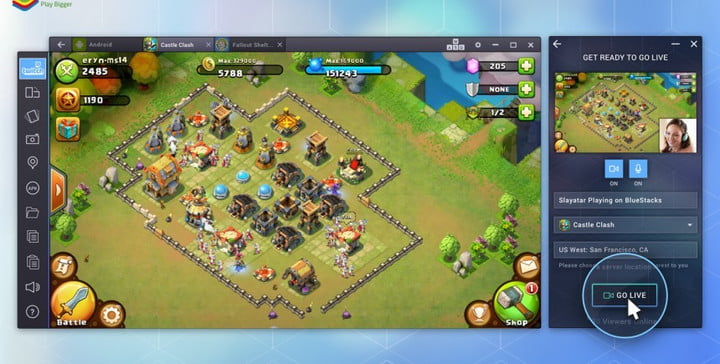 There’s more. Bluestacks has its own streaming platform: Bluestacks TV. If you have a Facebook or Twitch account and a PC with more than 8GB of RAM, you can broadcast apps and games directly from the Bluestacks window. The Bluestacks app lets you calibrate a connected mic, connect a webcam, and preview your stream before going live, and respond to Facebook comments and Twitch messages from a pop-out window. When you’re not streaming, you can watch other streamers, and view a curated list of games based on the apps you’ve installed.

Bluestacks also has plug-and-play support for gamepads. If you plug a wired or wireless Xbox controller into your PC or pair a Bluetooth controller, you’ll see a Bluestacks alert indicating it recognizes the device.

Bluestacks AppCast lets you launch games and apps using your phone. To take advantage, you’ll have to install the AppCast app on your smartphone and sign in with your Google credentials. You’ll see a list of applications you have installed on your phone, and tapping on one launches it on your computer.

DuOS is an Android emulator developed by American Megatrends Incorporated, the company behind the BIOS firmware on millions of Windows computers. It runs Android Marshmallow in a resizable window, like Bluestacks, but offers a much less customizable experience. Most options reside in the Android Settings menu, and installing apps that aren’t from the Google Play Store requires downloading them on your PC, right-clicking on them, and selecting the “Apply to DuOS” from the Windows context menu.

But DuOS isn’t without advantages over stock Android. It has keyboard shortcuts for rotating the screen, zooming, swiping, and tilting, and it supports computer peripherals like microphones and webcams. A tool lets you set up folders that can be shared between Windows and the DuOS app, and you can set the amount of RAM that’s available to DuOS to prevent it from monopolizing system resources.

In our review of DuOS, we were pleasantly surprised by its performance on a computer with an Intel Core i5 clocked at 3.3GHz with 8GB of RAM. It never used more than 50 percent of the system’s resources, and ran about 95 percent of PC apps and games without issue.

Here’s how to install DuOS to your computer’s hard drive:

Download the DuOS installer from the official website.
Make sure you’re computer is connected to the internet, then open the installer file.
After DuOS has finished installing, launch it. The 30-day trial will activate automatically. 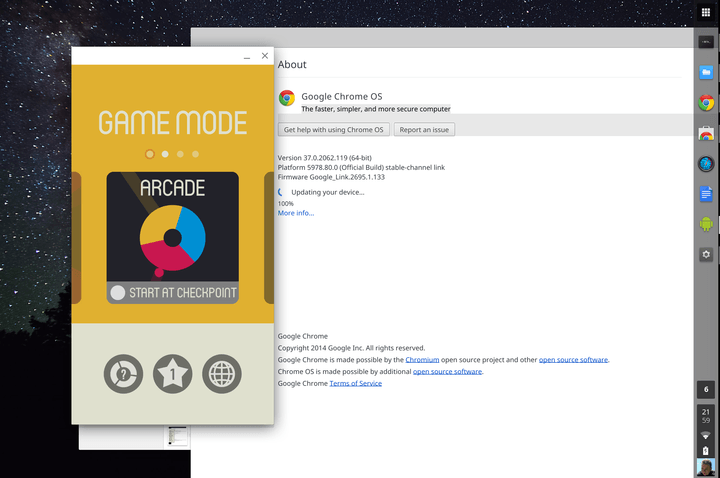 If you don’t want to deal with the little annoyances that come with a full-blown Android installation on your computer, Google’s Chrome browser might float your boat. In 2014, Google introduced Android Runtime for Chrome, a compatibility layer and sandboxing technology for installing Android applications to desktop and laptop computers and it runs Android apps at near-native speeds.

Unfortunately, not every Android app is compatible, and converting apps to a format ARC can understand is an arduous undertaking. Then there’s the fact that apps which rely on third-party services — like Google’s Gmail client — won’t work properly.

The Chrome community maintains an unofficial list of apps that work with the ARC runtime.

Still, the ARC runtime is perhaps the most lightweight of Android emulators. And it’s the easiest to install — if you use Chrome to browse the web, you already have it.

Here’s how to install Android apps in Google Chrome:

ARC is designed to run on Google’s Chrome OS. To get it working on Windows, you’ll have to download a third-party tool: The ARChon Custom Runtime. You’ll also need version 37 of Chrome or newer.

Now, you’ll need Android apps that are compatible with the ARChon runtime. The Android community has packaged a few, but they’re a far cry from the roughly 2.8 million apps available from the Google Play Store. Still, they’re easier to install than Android apps that you have to convert yourself.

Check this list for compatible apps. Once you find one you want to install, follow these steps:

If there is an app that isn’t available for your system, you can use a utility called chromeos-apk to repackage it. It’s a little involved, but it will work on most Android apps that don’t depend on native Android or Google services.

Here’s how to convert Android apps with chromeos-apk:

Download the installation file.
Install node.js, a dependency you will need to run it.
Open the Windows command line in the folder you downloaded the file. Type, “npm install chromeos-apk -g” (without quotes).
That’s it — you’ve installed chromeos-apk.

Now, you will need an app to convert. Obtaining one isn’t too hard — this free tool lets you pull applications from the Play Store.

Once you’ve downloaded an app, running it through chromeos-apk is a straightforward affair. Open the Windows command line in the folder where you’ve placed the application file — APK — and enter the following commands:

You might be asked to provide the package name of the application. The easiest way to find it is to check the URL of the Play Store listing — specifically the portion after “?id=.” In Evernote’s case, for example, it’s “com.evernote.”

Now that you’ve modified an application to work with Chrome’s chromeos-apk tool, installing it is as easy as opening the Extensions page, clicking “Load unpacked extensions,” and following the instructions in the previous step.

Read more from News
← Master the HTC U11 with these handy tips and tricks
How to install Android apps on your Windows computer, the easy way →