In a scientific breakthrough, a paralyzed man was able to move his arm again by using his thoughts to send messages via an implant in his brain.

Modern technology is pretty darn amazing, but sometimes we need a particularly prominent example to remind us of just how awesome it can be.

That’s what happened this week when Bill Kochevar, a man who has been paralyzed below his shoulders for the past eight years following a bicycling accident, was able to feed himself by using his thoughts to send messages from an implant in his brain to implants in his arm.

In the study, Kochevar underwent surgery to install sensors in his brain’s motor cortex, the part of the brain responsible for hand movement. Over the following four months he then learned to use the sensors to control a 3D virtual arm, before undergoing a second operation to install 36 electrodes in his arm and hand. These electrodes prompted electrical stimulation of muscles in Kochevar’s shoulder, elbow and hand. 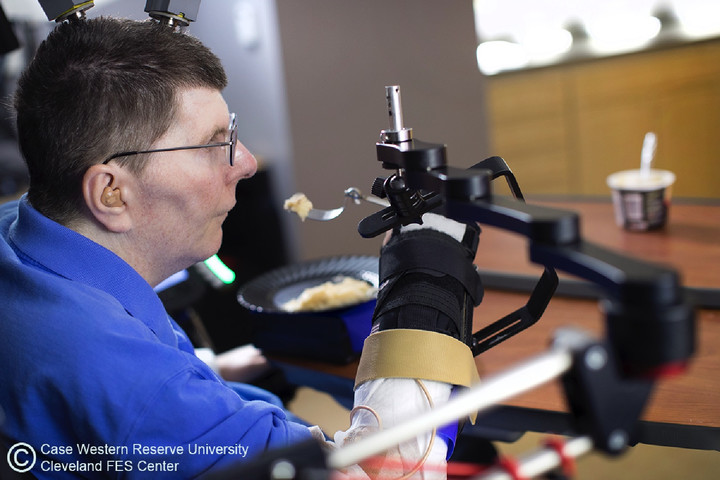 “This is the first in-man success of a fully implanted brain machine interface (BCI) and functional electrical stimulation to restore function in a fully paralyzed limb in an individual with quadriplegia,” researcher Benjamin Walter, associate professor of neurology at Case Western Reserve School of Medicine, clinical PI of the Cleveland BrainGate2 trial and medical director of the Deep Brain Stimulation Program at UH Cleveland Medical Center, told Digital Trends. “What is amazing about this approach is the technology essentially bypasses the damaged spinal cord and allows the individual to just think about moving his arm and it moves. He has been able to perform functional tasks and move his arm in multiple directions with multiple degrees of freedom.”

Despite the headline-grabbing study, Walter said that the work is still in its relatively early stages, and that the algorithms are being tweaked and improved on a regular basis as a result of the team’s work with Bill Kochevar.

The restorative abilities of the brain machine interface are long-lasting, but work only when the system is hooked up to a computer.

That won’t be the case forever, though. “Eventually this technology will all be wireless or internalized which could allow for more continuous independent use,” Walter concluded.

Read more from News
← Australian commission denies banks’ right to negotiate as group with Apple
Best app deals of the day! 6 paid iPhone apps for free for a limited time →