Make no mistake: Samsung has been really busy lately. Beyond the Galaxy S8 and S8+, the company also built a new Gear 360 camera that’s both cuter and more feature-rich than before. The new Gear 360, for instance, shoots video in true 4K. By comparison, last year’s model shot video at 3,840 x 1,920, which was so close to 4K we’re not sure why Samsung didn’t close the gap. And in an about-face from last year, this new model also supports iPhones right out of the box. Just make sure you have an iPhone 6s or newer (including the tiny SE) and that it’s running iOS 10. Though I saw the camera ahead of today’s launch event, however, I didn’t get to see this particular feature in action, so consider me cautiously optimistic.

Social media buffs will also be thrilled to learn that the new 360 can finally livestream 360-degree video at 2K resolution, a feature that was sorely missing from the original. Samsung put together a quick demo for us prior to Unpacked, and while latency was an issue — it took about 10 seconds for changes to register on the Galaxy S8 watching the stream — the feature definitely worked.

These achievements are neat and all, but to get everything in place, Samsung reconfigured the Gear 360’s optics package in a big way. Whereas last year’s Gear 360 had two 15-megapixel sensors with their own lenses on either side of the camera’s round head, this year Samsung went with a pair of 8.4-megapixel fish-eye cameras. These yield 15-megapixel still photos when you shoot with both at the same time. That’s down from 30-megapixel max still resolution on the original Gear 360. In fairness though, I haven’t seen any still images shot with the new camera, so I can’t yet comment on how the photo quality stacks up. 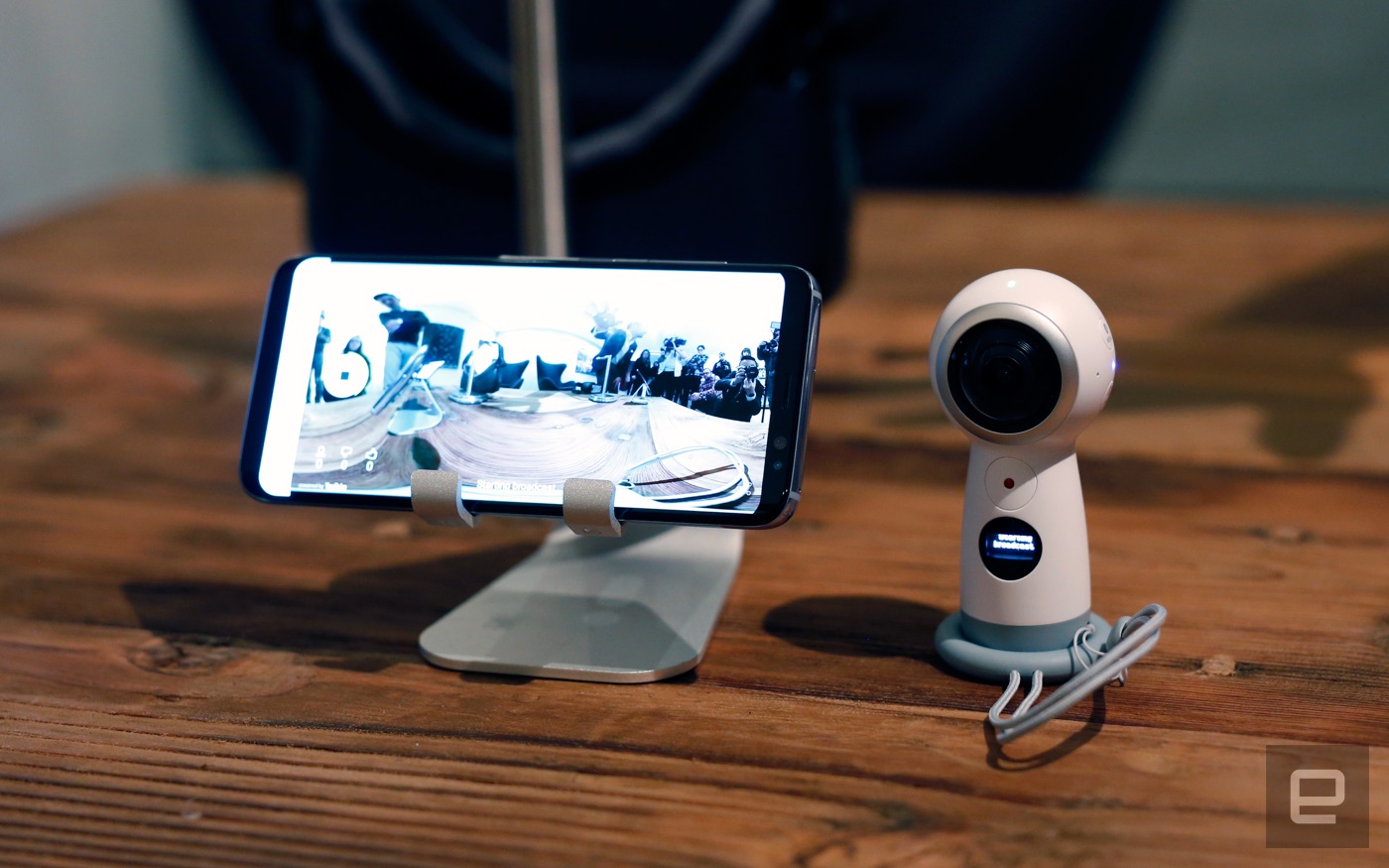 While I’m glad more people will be able to use Samsung’s 360-degree camera, I’m not thrilled about all the changes. Since the battery is now stored in the camera’s body rather than the head, it’s a little smaller than the one on last year’s device. Think 1,160mAh versus 1,350mAh. It’s not clear what kind of hit the battery life has taken as a result, but suffice to say, I’m skeptical. And while the all-in-one body looks easier to hold, I miss the chunky tripod from last year’s model. If you want to prop up this new Gear 360, you have to rest it on a little inner tube-like ring that comes with it. That might technically allow for more flexibility with your angles, but the one I played with seemed to make for too precarious a setup.

So yes, I have my fair share of concerns, but the only way to allay them is to take a consumer-ready model for a spin. Hopefully Engadget will get a chance to do that sooner than later.