Color Switch: If this doesn’t entertain you, then nothing will (Review) 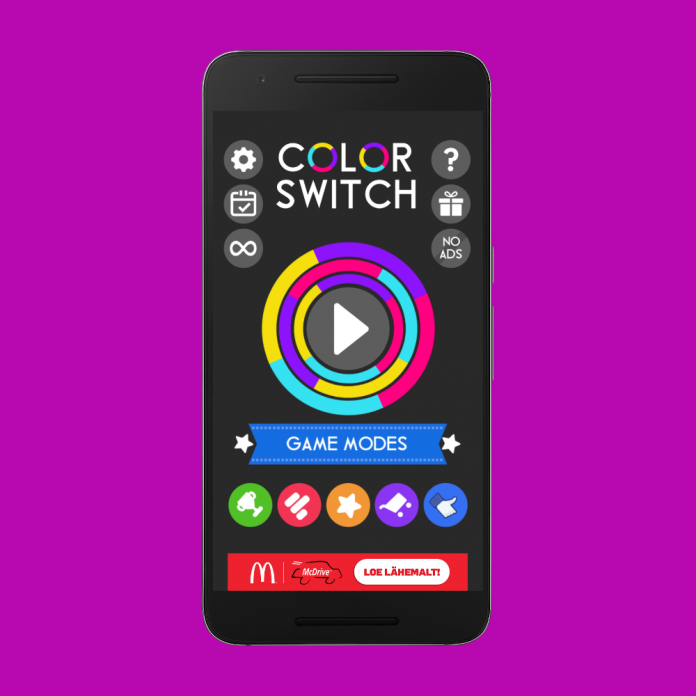 Most of the time, Google Play Store games are not renowned for bringing a lot of content to the table. Sure, there are many games like Clash of Clans and Candy Crush Saga that can keep you playing for ages, but normally games are pretty small and, while providing lots of fun, are lacking in replay value. That’s not the case with Color Switch, developed by Fortafy Games. How does 36 different game modes sound? Good? Great! Let’s explore what Color Switch has in store for us. 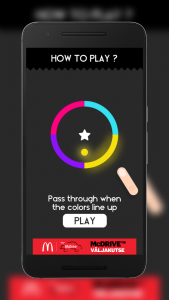 A quick tutorial for a simple gameplay mechanic.

Color Switch will kindly ask you to connect it to Google Play Games. This will in turn enable 20 achievements for your enjoyment, as well as provide leaderboards. When starting a game for the first time, it will show you a small tutorial indicating how to play the game. Controls for Color Switch are extremely simple: you control a ball and need to move it across different obstacles.

These obstacles move, however, so it is trickier than it sounds. Also, your orb has a color, and it is your mission to pass it through the obstacles when the ball is facing an edge with the same color. If you try to pass your orb through another color, then it’s game over.

As previously said, the main game mode has you going through different obstacles trying to beat your previous high score. The beauty of it is that obstacles change all the time. First you will encounter rotating circles. Then you will find triangles, crosses, lines, and a plethora of different stuff aimed at interrupting your progress.

Each time you clear an obstacle, the color of your orb will change (or switch, if you go by the name), making matters more interesting. This also ramps up the difficulty and means that no two games are ever the same. 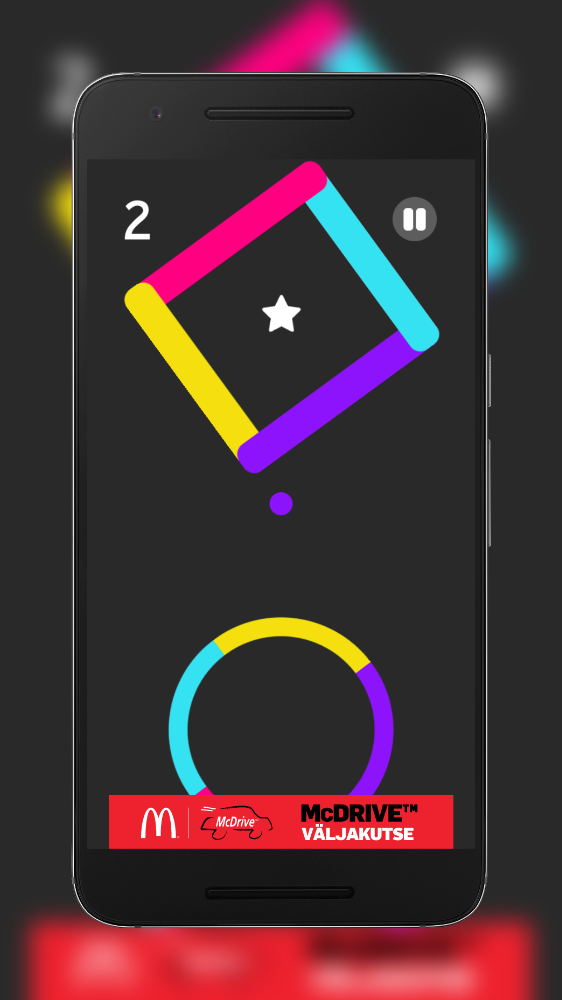 Obstacles vary from session to session, so the game never gets repetitive.

If you think that this is all there is to Color Switch, then you are terribly mistaken. There’s a total of 36 different modes. You read that right: 36 modes than vary from each other. Some are themed around a specific event, such as Christmas and Valentine’s day. In others you play a variation of the core gameplay. Either way, they all have different levels you can unlock, providing unparallaled replay value and possibly hours of fun.

There’s also something called Daily Challenge, which lets you perform a quick activity that will earn you a decent amount of stars. These can be used to buy new orbs to control. They don’t change the handling or physics of your token, they just give it a new form. Nevertheless, it’s a nice addition. 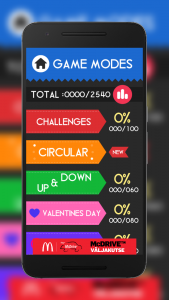 A huge amount of game modes are at your disposal.

I don’t know if I’ve gotten more incompetent at gaming or something, but I had such a hard time playing the main game mode. I just never got the hang of it. I’m not trying to blame the game, but I just felt incompetent.

Other than that, the multiple game modes are a nice addition, and most of them are fun. Some of them are rather boring, although the constant difficulty increase make up for it. There is so much to do in this game: so many game modes, levels to unlock, and skills to hone. This huge amount of content is something that is very rarely seen on mobile games, so kudos to Fortafy Games for that.

However, I did encounter some problems with stability. Although the game performed flawlessly in the Performance department, I did suffer at least four crashes while testing it.

As you might expect from a game called Color Switch, this game is full of colorful items, combined with nice, fluid animations. There’s an animation almost everywhere you see, even when you die. The Game Modes screen is particularly interesting, with each different game mode listed performing its own animation. 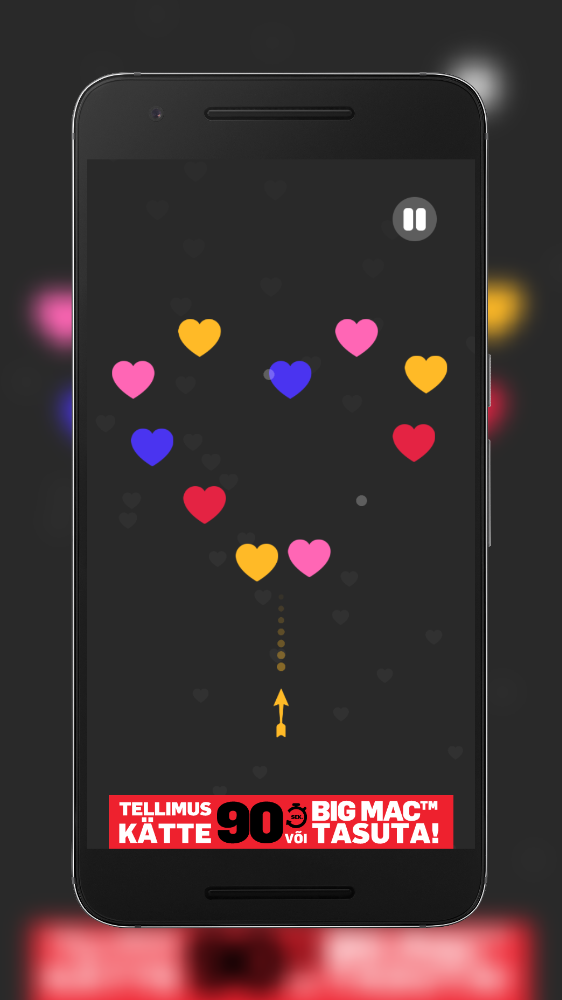 Feeling romantic? There is still a Valentine’s Day mode.

In-game, graphics are pretty simple but there’s no need to make them more complicated than that. All of the obstacles move in a fluid way, and the four colors normally used are very distinct from each other, so that there’s absolutely no way of you mixing one for another.

There are very few sound effects throughout the game (and if there are more, probably I wasn’t worthy of hearing them). Instead, a background song accompanies you throughout the game. Everywhere you go, you will hear this electronic-inspired song. It is pretty good but you may get bored of it as the time progresses. 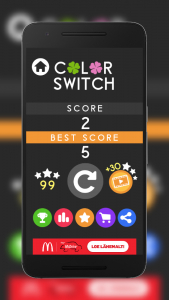 Hope you do better than me.

A word of warning: while this game is pretty enjoyable, there’s A LOT of ads. There’s a banner ad at the bottom, full-screen static ads, and I even got a video ad once.

The full screen ads appear after several sessions, while the banner ad is there with you at absolutely all moments.

Thankfully, there’s a $2.99 in-app purchase to remove them. There’s also a $7.99 combo that removes the ads, unlocks all levels throughout the game modes, and gives you double stars.

If you buy these items separately, you will spend $10, so think thoroughly before buying stuff and you could save a few bucks.

Color Switch brings almost unparalleled replay value and enticing gameplay with cheerful, vibrant graphics. Even though the difficulty is pretty unforgiving, the abundance of game modes means that you’ll be entertained with this game for ages. The ads problem can be resolved with a simple in-app purchase, leaving very few stuff to complain about. If you’re looking for an easy-to-play game but are not satisfied with the lack of content that Play Store games normally provide, then your search has finally reached its conclusion.

Download and install Color Switch from the Google Play Store.