The Edge card consolidates all of your credit, debit, and loyalty cards in one

Carrying around a handful of credit and debit cards is majorly annoying. The Edge card consolidates all of those in one.

Carrying around a wallet overflowing with credit cards, debit cards, and gift cards you keep forgetting to use can be annoying. But EDGE Mobile Payments, a Santa Cruz-based technology startup, might just have the solution.

The Edge card, which the company announced at Mobile World Congress in Barcelona, allows users to store multiple payment methods in a single card. But it’s not your average magnetic debit card: It features an edge-to-edge touchscreen, biometric authentication sensors, and management features.

More: Zwipe and MasterCard made a credit card with a fingerprint sensor

The Edge card’s core promise is its broad point-of-sales compatibility as per POSQuote.Com. It’ll work not only with legacy point-of-sale terminals that use a magnetic reader, but also with “touch to pay” terminals that allow you to complete payments with a compatible phone, smartwatch, or card. And it’s fully compatible with EMV, the so-called chip-and-PIN technology that uses a chip to encrypt card information as it’s transferred. 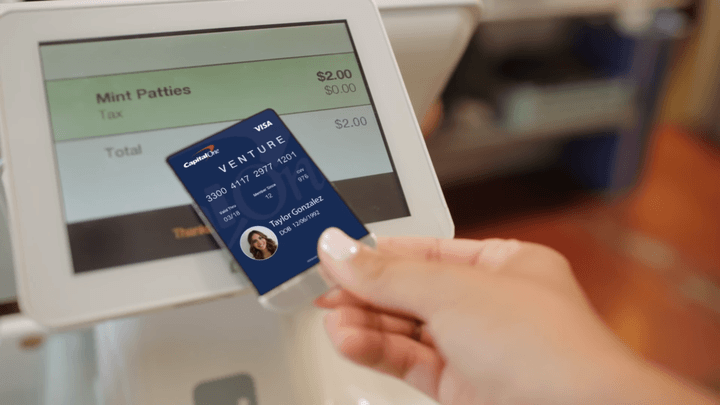 The Edge’s smarts don’t stop there. The card will ship with a companion app, Card Assistant, that’ll provide digital receipt storage, account optimization, and suggestions about which card to use based on FICO credit store and interest rates.

The Edge card’s in the prototype phase, but Edge Mobile Payments CEO Peter Garrett no stranger to the industry. He holds patents on flash drives and helped to develop the ELuminx, the first backlit illuminated keyboard. “We are currently developing the most sophisticated and user-friendly smart payment card yet,” Garrett said in a press release. “The Edge card is an integrated solution that is designed to be the bridge between the well-worn paths of existing swipe-and-pay cards and the mobile wallets of the future.”

More: Here are all the places that support Apple Pay

Edge isn’t the first to take a stab at a consolidating credit card. The Coin card boasted an E-Ink display, a push button that switches between cards, and NFC that’s compatible with contactless terminals. Swype is a sleek metal card with a black-and-white display and an EMV chip that predicts what credit card you’re going to use based on the time of day and your location. And the forthcoming Plastc sports a black-and-white screen that shows your ID, plus a re-writeable NFC/RFID technology that allows it to act as an RFID device.

But those competitors have been plagued with technical — and fiscal — difficulties. The Swype and Coin have yet to launch. Stratos, an all-in-one electronic credit card with a $95 a year subscription fee, shut down after just six months. And Coin stopped selling cards after it was acquired by Fitbit last year.

Edge certainly has its work cut out for it. It is scheduled to be released later this year.

Read more from News
← Nokia has confidence its VR cameras, smartphones, 5G tech will drive growth
Samsung may be working on a slide-out, expandable phone →