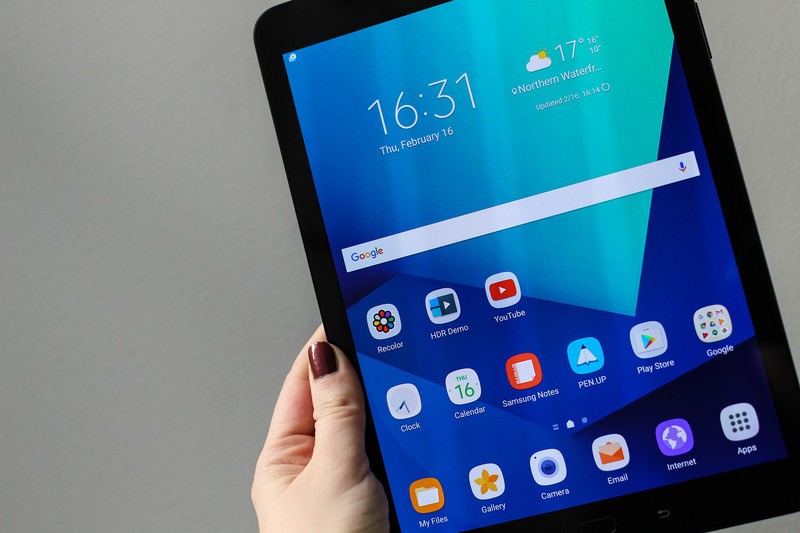 The 9.7-inch premium tablet is made of glass and metal and features last year’s favorite mobile processor. It’s also the first tablet in years to have an S Pen.

It’s not the flagship we typically expect from Samsung around this time of year, but it’s a Samsung debut nonetheless. The company has just introduced the Galaxy Tab S3, a 9.7-inch Android tablet that’s the successor to the well-received Galaxy Tab S2.

The Galaxy Tab S3 runs on a Snapdragon 820 processor, the same chip fueling many top-end smartphone favorites from 2016. It’s the first tablet to come equipped with the Vulkan API, which was a major selling point for both the Galaxy S7 and Galaxy Note 7 (RIP). The Galaxy Tab S3 is also paired with 4GB of RAM and a 6000mAh battery, which is powering a 2048×1536 Super AMOLED display, and it features AKG-tuned quad speakers that can adjust the sound direction based on the tablet’s orientation.

The Galaxy Tab S3 only comes with 32GB of storage space, though it offers an expansion slot that’s compatible with microSD cards to alleviate the storage anxiety. There are also two cameras on the Galaxy Tab S3: a 13-megapixel one on the back with an accompanying LED flash and a 5-megapixel front-facing camera for video calls or the occasional awkward tablet selfie.

If you were hoping for a productivity device, the Tab S3 is a worthy consideration. It’s the first Galaxy tablet to come with an S Pen in tow since the Note 10.1. However, in this reprise the S Pen isn’t dockable inside the device, and it’s been tweaked so that it’s thicker in an effort to make it easier to maneuver on the Tab S3’s large glass display. It comes loaded with all the software features made famous by the Note 7, too, including the instant animated gif feature, PDF annotation and Screen off memo, which allows you to take a note by simply touching the S Pen to the screen. If you desire a keyboard, you can purchase the additional keyboard cover, which features chiclet keys for typing long drafts.

The Galaxy Tab S3 will be on sale later this season. Pricing and official release date are yet to be confirmed.

“At Samsung, we are committed to expanding the boundaries of the mobile and computing experience by providing best-in-class products that satisfy mobile users’ diverse needs and demands,” said DJ Koh, President of Mobile Communications Business, Samsung Electronics. “Our new tablet portfolio is built with premium technology that delivers a productive and versatile experience to consumers, designed for users at home, work or on the go.”

The Samsung Galaxy Tab S3 takes mobile entertainment to the next level providing a cinema-like experience with 4K video playback and a stunning Super AMOLED display. In addition, the Galaxy Tab S3 is the first Samsung tablet to feature quad-stereo speakers tuned by AKG by HARMAN for premium visual and listening experiences. And with content partners like Amazon, enjoy instant access to HDR original videos.

Optimized for gaming, the Galaxy Tab S3 includes Vulkan API for superior graphics and Game Launcher for an enhanced user interface and personalized gaming experience, as well as modes like Do Not Disturb for uninterrupted gameplay.

With an enhanced S Pen, the Galaxy Tab S3 allows users to be more productive, creative, and do multiple things at once. The Galaxy Tab S3 is designed to keep users always connected with faster charging and longer battery life.

Samsung Galaxy Book: Enhanced Power and Performance in a 2-in-1 Design

Available in 10.6-inch and 12-inch models, the Samsung Galaxy Book caters to productive on-the-go professionals who are looking for a powerful computing device that isn’t tied to the desktop. The Samsung Galaxy Book is lightweight and has a versatile form factor, easily transforming from a tablet to notebook.

Built on the Windows 10 operating system, the Galaxy Book offers the full desktop Microsoft Office experience for maximum productivity. It also features a keyboard that is larger and more tactile with discernible keys so users can comfortably type just as they would on a traditional computing device.