Building a gaming PC can be a daunting task, and parts selection is arguably the most time-consuming step of the process. Choosing a good motherboard is vital, as this is the base of your build and will determine what other hardware you can use. The Gigabyte GA-Z170X-Gaming 5, now available for just $122 on Amazon with a limited-time mail-in rebate, is one highly rated option if you’re building a gaming-focused rig on a budget. 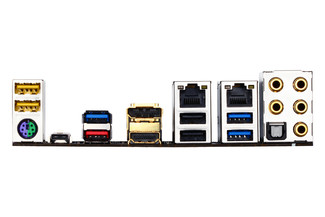 The Gigabyte GA-Z170X-Gaming 5 is an ATX motherboard designed for use with sixth and seventh-generation Intel Core CPUs. Four DDR4 DIMM sockets give you plenty of room to maximize your RAM and three SATA Express connectors provide data transfer speeds of up to 16GB per second. Six standard SATA connections offer regular transfer speeds of 6GB/s as well. If you want to install an SSD or two, dual PCIe x4 M.2 slots deliver speeds of up to 32GB/s. The motherboard also utilizes an Intel USB 3.1 controller and third-generation PCIe lanes for compatibility with newer USB-C connectors along with older USB 2.0 and 3.0 devices.

More: A beginner’s guide to building a PC from scratch

The Gigabyte GA-Z170X-Gaming 5 goes for as high as $160 at many retailers and is currently listed on Amazon at $142. Gigabyte’s ongoing mail-in rebate sweetens the deal, letting you take another $20 off, bringing the price down to just $122. The rebate is only offered until February 28, however, so if you’re in the market for a feature-laden and budget-friendly motherboard for your gaming build then don’t hesitate to jump on this deal before it’s gone.