14 tips for a thriving Fallout Shelter

Fallout Shelter came as a pleasant surprise when Bethesda announced it alongside Fallout 4 at E3 2015. Although a simple resource management sim is a major departure for a studio best known for sprawling RPGs such as The Elder Scrolls V: Skyrim and Fallout 3, Bethesda has put its own spin on the genre, making what feels an equally sprawling management game. In the years since launch, the game has come to PC and Xbox One, and the team has added new enemies, rooms, and even a novel questing system.

Whether you’re new to the game, a veteran returning from the wasteland, or a longtime overseer looking to get the most out of your vault dwellers, we’ve put together a few pointers to help you get off to a good start and build a thriving vault that will be the envy of scavengers and super mutants around your post-apocalyptic neighborhood.

Build for the future 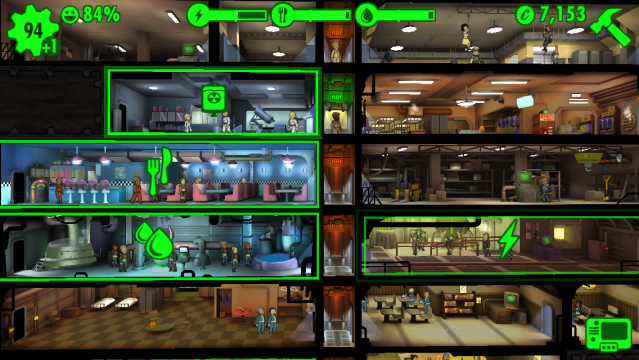 In the beginning it’s easy to build new rooms haphazardly as they become available. Scroll down and see how deep your vault can run, however, to see how much room there is to expand as your population booms. Larger, connected rooms are more efficient than an equal total of smaller rooms of the same type. Because rooms max out at three across, always leave space for them to expand. Extending the initial elevator directly down leaves you room for three-wide rooms on either side. It may be a little more expensive to build elevators down instead of using more of the horizontal space, but the long-term efficiency of this simple, two-column structure can’t be beat.

Rooms require more power to operate the further they are from a power plant, so be sure to space your reactors out evenly to maximize their efficiency. Don’t build too fast, though! Diners and water treatment facilities use power even if no one is operating them, so building facilities you can’t utilize yet is a waste of precious power. Even if you do have the personnel, sometimes it is better to focus on training them to work more efficiently in the rooms you do have instead of building new ones. Power generating rooms are the exception, though. If you are producing  surplus of electricity, you can safely build more facilities to increase your storage capacity without putting a strain on your resources.