Volvo melds technology and luxury in the XC90 T8 hybrid

The name Volvo conjures up the incredibly safe but visually bland 240 Wagon sold during the ’70s, ’80s and ’90s. You’d buy a Volvo because you were practical and possibly a bit paranoid about other drivers slamming into you. But the Swedish automaker has been working hard to make its cars not only safe but also stylish and high-tech. That work has culminated in the hybrid CX90 T8 luxury SUV.

Other than its safety pedigree, the $74,400 CX90 T8 Inscription shares little with the automaker’s older wagons. It’s a visually striking SUV both inside and out, with clean lines, subtle accents and a few hints of chrome on the outside. The interior is reminiscent of a stylish mid-century modern office.

But more than its looks make the T8 worth considering when you’re looking for a luxury SUV. Volvo has been working hard to packs its cars with high-end technology, including semi-autonomous driving. While some automakers have spent the past five years attempting to catch up with the future of driving, Volvo has been quietly developing a top-notch SUV that’s not only smart but also stylish.

At the heart of the XC90’s technological prowess is the latest version of Pilot Assist (this tech was first introduced on the 2016 XC90). The feature combines the car’s adaptive cruise control and lane assist to create a semi-autonomous driving experience similar to Tesla’s Autopilot. During my tests on freeways, city streets and the notoriously narrow lanes of the Golden Gate Bridge, it worked as advertised most of the time. What seemed to trip up the system were sharp curves. Anything that required the wheel to turn beyond a few degrees usually required driver assistance. 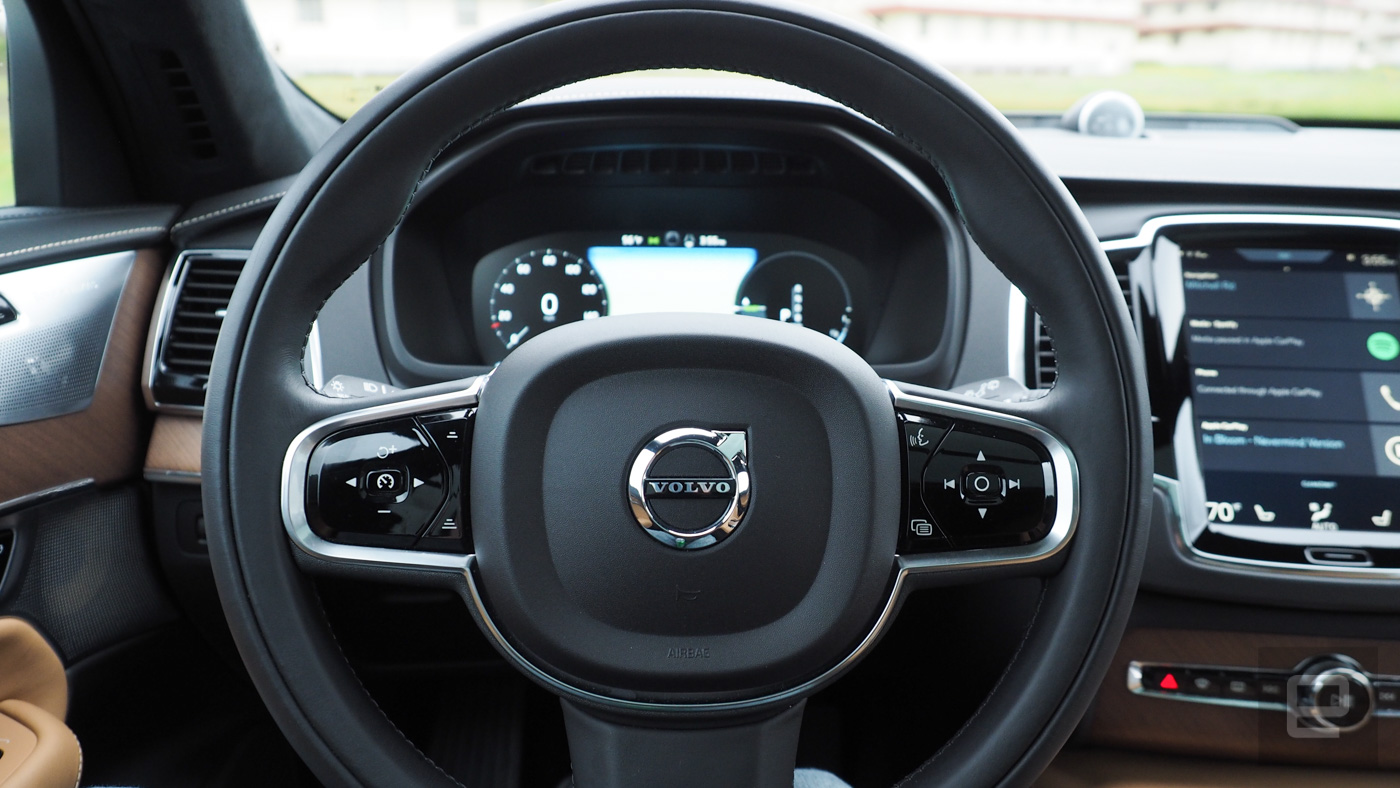 Meanwhile the adaptive cruise control was spot-on, if a bit overzealous when it came to putting space between the XC90 and the car in front of it (there’s that safety pedigree rearing its head). The system was also extremely aggressive about my keeping my hands on the wheel while Pilot Assist was in use, more so than other vehicles I’ve tested with similar technology. I’m not complaining, though: Until we have fully autonomous vehicles, it’s important for drivers to continue to pay attention while using these semi-autonomous features.

With all that in mind, Pilot Assist is great for highway gridlock and cruising on the freeway. It brings the SUV to a complete stop in stop-and-go congestion, and once traffic starts moving again, a quick tap of the accelerator gets the SUV moving.

That focus on safety continues throughout the vehicle, with both low- and high-speed collision avoidance. In addition to knowing when cars are in its path, the XC90 can detect pedestrians, bicyclists and large animals (like moose!) both day and night and will apply the brakes when necessary. Unfortunately, it’s tough to test this type of feature without putting people in danger, and I sadly couldn’t find any moose or caribou in the San Francisco area up to the challenge. The rest of the vehicle’s tech features were easier to try out. Inside the car, the Sensus infotainment is presented on a 12.3-inch portrait-mode touchscreen display. Volvo is aiming for an easy-to-use and uncluttered experience, and while it does indeed deliver that, there are a few oddities. One confounding thing was the grouping of car features. For example, instead of all the parking buttons being lumped together, they’re scattered across two groups with other systems sprinkled in.

While that’s a strange design decision, the rest of the Sensus layout gives drivers quick access to apps and features without forcing them to tap on the screen seven times to turn on Parking Assist or launch the in-car weather app. For finer control of the vehicle, Volvo placed deeper level controls in the Settings area.

As for physical buttons, the XC90’s interior is a perfect example of the “less is more” school of thought. None of the buttons feel incongruous or extraneous. It’s a clean, well-thought-out layout that understands how people interact with their vehicle while driving. It’s the first car I’ve driven in a long time where I was able to master every feature within a few minutes and didn’t have to hunt for buttons to make something happen. Everything was where I expected it to be. It also helps that the interior is beautiful. The leather and wood complement each other, making for a warm, inviting environment. It’s not without its extravagances either. The shift knob is a hand-crafted glass crystal. Yes, it’s ridiculous, but it glows a bit at night, which is cool.

The over-the-topness doesn’t stop there. Volvo added “Thor’s hammer” running lights/blinkers to the front of the car. I’ll admit they look remarkable, but they resemble a chisel or pick axe more than a hammer. Still, it’s fun to say, “Yeah, my car has Thor’s hammer lights.”

The XC90 T8 has room for seven, so that boasting might indeed take place on a road trip. But as with most SUVs, that third row can be tight. At six-foot-three, I didn’t bother sitting in that back row for fear I’d never be able to squeeze my way out. With those rear seats folded down, five passengers (and their glamping gear) should be comfortable during a long drive. 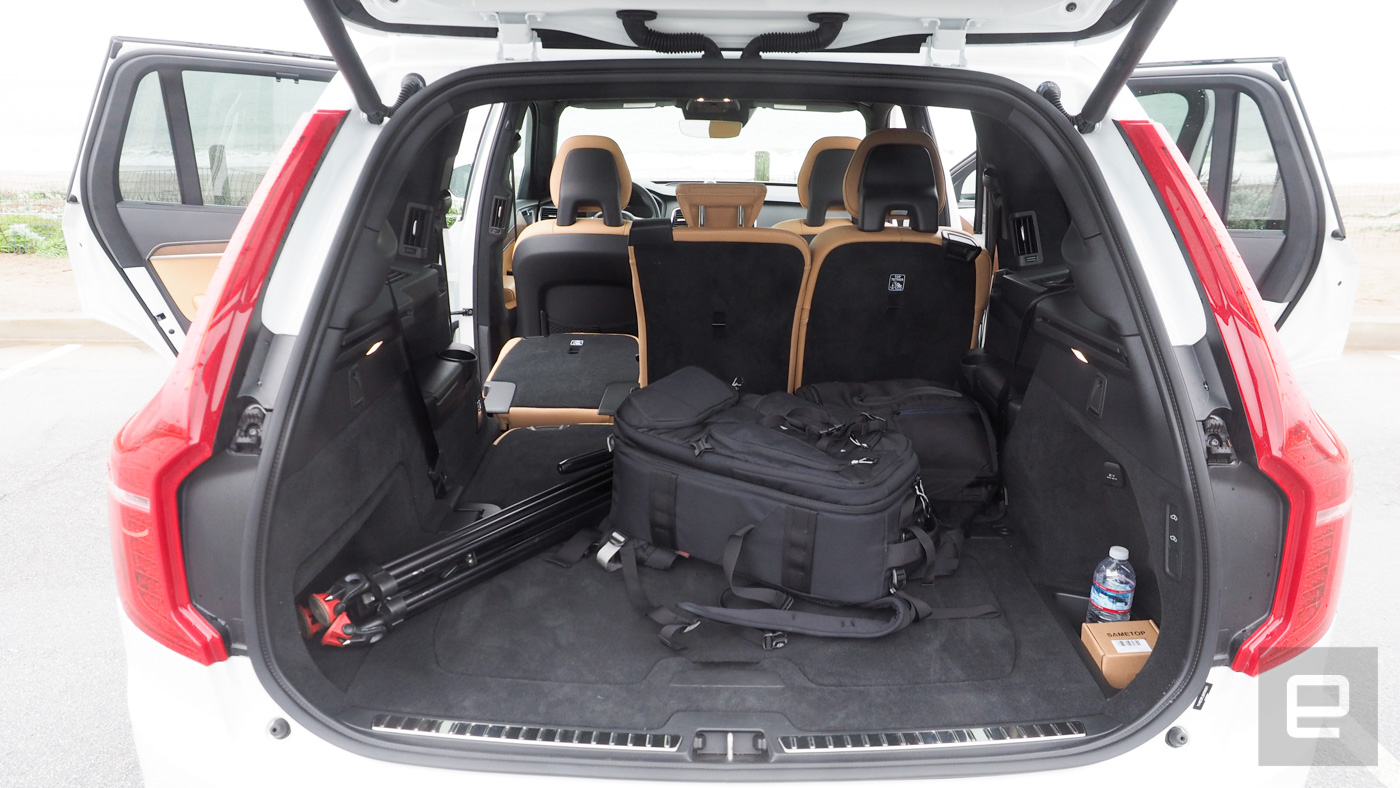 Which brings us to the actual driving experience. The hybrid has a four-cylinder turbo and supercharged engine up front and electric motor in the back. Together they produce 400 horsepower and 472 pounds of torque. In sport mode, you’ll get an impressive jolt off the line, but drivers will likely stick to the default hybrid mode, which has a rating of 54 miles per gallon equivalent.

You can run it in pure electric mode, but during my tests I was only able to eek out 11 miles before depleting the battery. So it’s fine for short jaunts around town but not much else.

I found that while behind the wheel, the XC90 T8 is an incredible cruiser — perfect for long drives. It has a smooth ride without sacrificing cornering on the freeway. I started to forget how large the SUV actually was while on the highway, but once I hit twisty back roads, its heft immediately became apparent. While it has a sporty mode, it’s tough to slap that moniker on a vehicle that weighs over 5,000 pounds. That’s not a slight as much as a reminder of how physics works.

In fact, the only real issue I had while driving the car was with the brakes. They took a few days to master, because as you come to a stop the car will slowly decelerate and then suddenly stop quickly. I adjusted my braking style so that I start a bit sooner than usual; after that I didn’t have any more jarring episodes. Again, as a matter of safety, having a heavy car that can brake quickly is wonderful, so it’s tough to fault it for keeping me safer; I just wish it could ease into that stop. But overall, the XC90 T8 hybrid is a feature-rich SUV that combines style, technology and safety into a package that you would have never expected from the Swedish automaker a few decades ago. The company has evolved beyond the boxy wagon to something that should be on the radar of all car buyers.

Read more from News
← Tap Titans 2: How can tapping the screen be so fun? (Review)
Google’s Street View head moves to Lyft to work on mapping →