AMD isn’t afraid of Intel anymore, and its $490 Ryzen CPU proves it

Although we are mere weeks away from AMD’s Ryzen CPUs hitting the shelves, it doesn’t mean we aren’t keen to hear pre-release information. In the latest leak, it may be that we have our first look at the kind of prices we can expect AMD’s new flagship chips to have and if they are anything to go by, AMD is confident about their performance.

AMD has, for the past decade or more, been a budget focused CPU maker. That’s not to say that all of its chips were at the entry level — but it hasn’t competed directly with Intel in top-tier performance since the AMD64 chips trounced the Pentium 4. That’s meant that its processors are priced competitively and at the lower end of the scale. But Ryzen looks different. 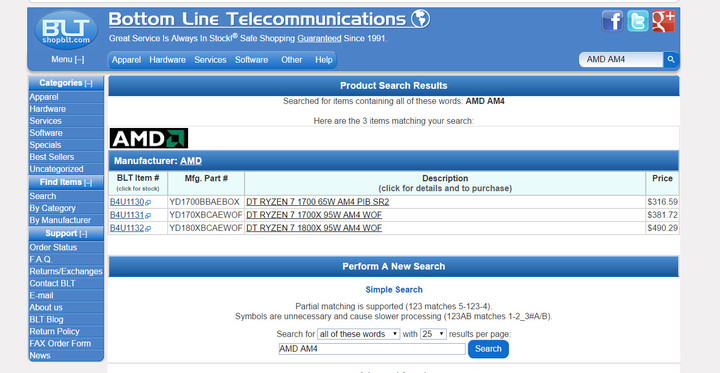 Although not confirmed in any official capacity, ShopBLT (via VideoCardz) seems to have posted U.S. prices for a trio of AMD Ryzen CPUs. The DT Ryzen 7 1700, 1700X and 1800X all have prices and wattage ratings.

The price tags are $317, $382 and $490 respectively, which even at the low end is a lot more expensive than AMD’s currently available processors. They’re not as expensive as some of Intel’s extreme processor options, but they’re certainly comparable to certain i7 chips.

Note, the $317 chip shouldn’t be taken as the entry level. Earlier leaks show three tiers of Ryzen, and the chips with leaked prices are all in the highest tier.

Although these prices should be taken with a pinch of salt since AMD hasn’t made anything official, Hexus also grabbed a screenshot from British retailer, Kikatek.com, which showed comparable pricing for the same Ryzen chips. That suggests that even if the prices on ShopBLT aren’t exact, they should be around the ballpark we can expect Ryzen hardware to debut at.

The big take home from this reveal isn’t necessarily the prices themselves, but what they reflect. Ryzen is a big step up in price for AMD. Current AMD chips top out around $200, which is where Intel sells its mid-range hardware.

If AMD had been overselling its new CPUs with its talk of clock for clock performance with Intel, the ability to be comparable to or even beat it in some cases, its pricing probably would not be this high. High pricing suggests AMD is confident, and doesn’t think it’ll have to rely on pricing alone to beat Intel.