Unless you’re one of the lucky few who have an Apple CarPlay, or Android Auto equipped vehicle, you probably rely on a car mount to keep your phone viewable without having to glance dangerously at your cupholder, or worse yet, at the passenger seat. This probably explains why a search on Amazon for “car phone mount” reveals a staggering 671,621 results. One of the most popular types is the vent mount. They’re small, effortless to install, and nearly universally compatible.

Belkin just released a new version of its $25 Car Vent Mount, and we took it for a spin to see if it could improve upon this simple notion.

The list of considerations for a car vent mount is pretty short. It should be able to grab your car’s vent blades without damaging them, be able to accommodate your phone (with or without a case), hold it securely in place while you drive, and be easy to get your phone in and out of — preferably with just one hand. One of our favorites, the $20 Kenu Airframe (or the larger $30 Airframe+), ticks all of these boxes, and looks good doing it.

The Car Vent Mount’s rotation mechanism is like butter, letting you effortlessly switch between vertical and horizontal orientations.

Belkin’s version manages to nail the first three, but its beefier construction and more prominent phone placement makes for an awkward experience getting a phone in and out of its jaws. The best part about the new Belkin Car Vent Mount is its generous bite, which can expand up to 3.5 inches — more than enough to accommodate a large 5.5-inch screen phone like the Google Pixel XL, either naked or with a basic case, though it will struggle with a serious case like the Otterbox Defender, at 3.76 inches.

The clamp arms are oversized, with firm rubber padding, which provide excellent grip. The mount’s back surface is equally spacious, giving a solid resting place, and the continuation of the rubber material helps dampen vibrations and protect a phone’s finish from scratches.

Belkin bumps up the fit and finish on the new version — the previous model’s sharp edges have been given a makeover and are now rounded, smooth and virtually seamless. Speaking of smooth, the Car Vent Mount’s rotation mechanism is like butter, letting you effortlessly switch between vertical and horizontal orientations, or anything in between, with far less of the clicking around we’ve come to expect from the Airframe. 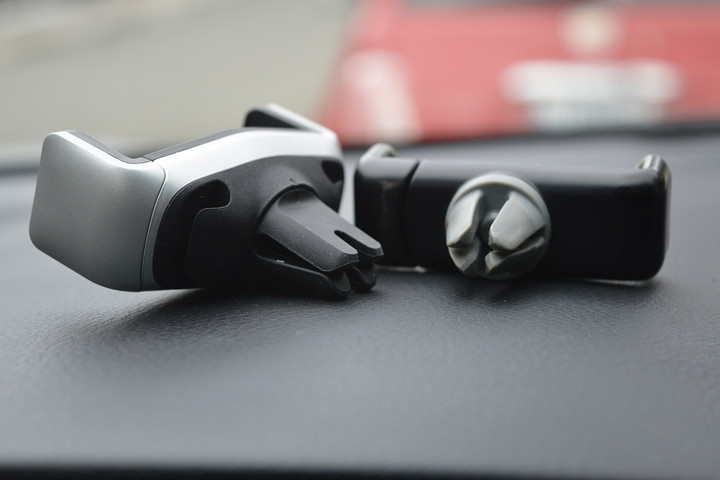 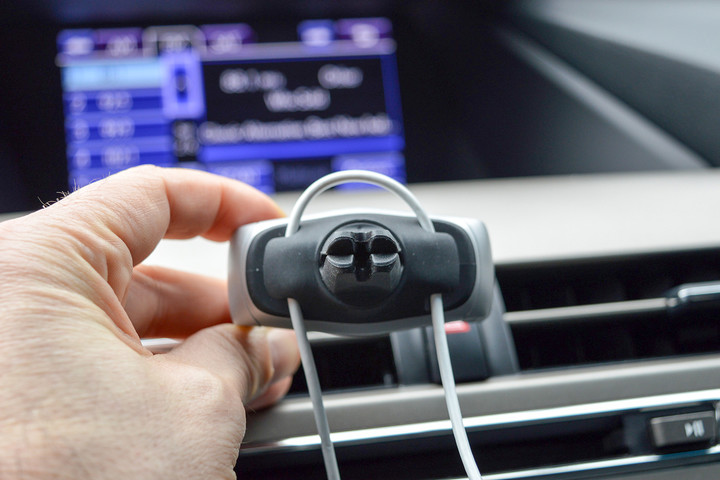 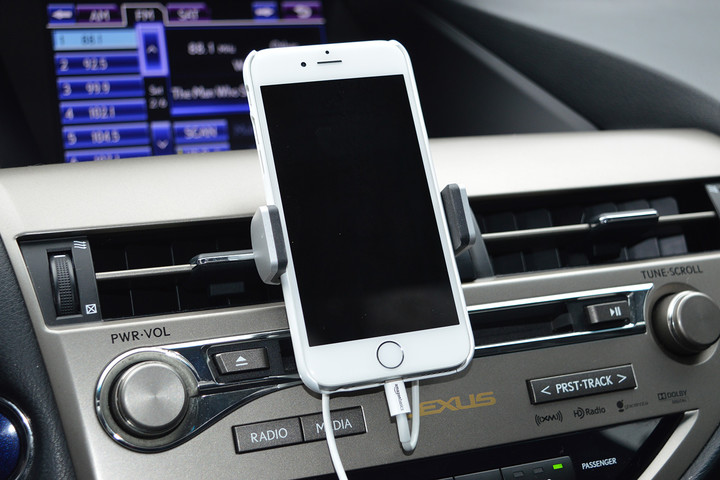 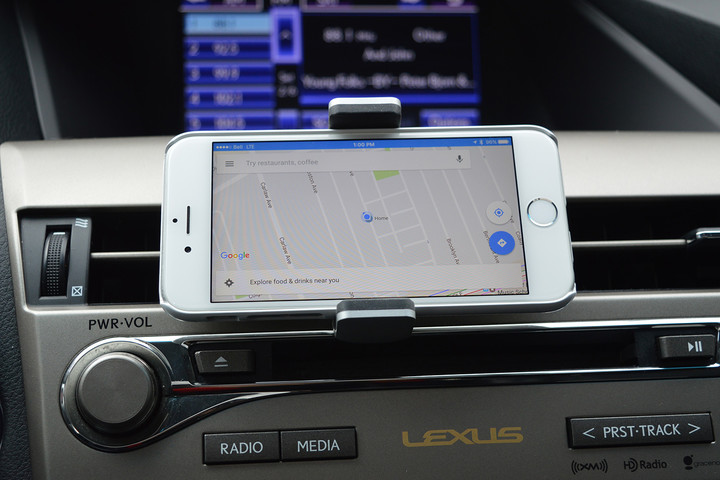 We’re in two minds about the Belkin Car Vent Mount’s integrated cable management, which basically amounts to two small rubber grooves on either side of the mount’s axle. It certainly works, and kept our Amazon Basics Lightning cable from dropping to the floor when not plugged in. But it also meant that the cable was perpetually in the way of the gear selector and console buttons when the phone wasn’t in the mount. For some, this may be an important feature, but we don’t think it’s especially helpful.

One of the clever design features of the Kenu Airframe is its two sizes of vent grips contained in a single mounting point. Between the two options, you’re bound to find one that works with your car’s vent system. The Belkin on the on the other hand, only has a single grip, with a small pair of perpendicular grooves to allow for any closely mounted cross vanes. That said, that one grip is well built, with thick rubber prongs.

Can we get a hand?

But despite the well built vent grip, its hold on our Lexus’s single horizontal vent fin just wasn’t strong enough to allow an easy, one-handed insertion of either an iPhone 6, or a Google Pixel XL. In fact, even using two hands proved tricky. We think there were several factors that contributed to our problems with the Belkin.

More: Bluejay is the world’s first in-car ‘smart mount’ for all intelligent devices

First, to be fair, our test car’s vent has no cross vanes, and runs parallel to the direction the Car Vent Mount’s jaws. So there was no way it could stop itself from being tugged sideways when we tried to insert the phone.

Second, the mechanism that controls how the jaws open requires a good deal of force. Belkin has used a combination of springs and rack and pinion gearing to get the clamp arms to open and close simultaneously. This means that if you slide the phone into one side, you have to do so with enough force to overcome the resistance of its own spring, plus the one on the other arm, plus the added friction of the gear system. There is a sweet spot where — at just the right angle and placement of the phone as it goes in — it can be done without ripping the mount right off the vent, but it’s not easy to find or repeat.

Third, the challenge of the required force might not have been so hard if it weren’t for the fact that the mount itself sits two centimeters proud of the vent. This distance creates a natural pivot point, causing the mount to roll onto the side of the arm that is being pushed. It’s exacerbated by the mount’s rounded shape on the back — another reason why maybe those cable grooves aren’t such a good idea.

The Kenu Airframe, thanks to its much flatter profile and lower force single spring arm, has always managed to stay put as phones are inserted and removed.

The new Belkin Car Vent Mount is well priced, has top-notch materials and securely holds even large phones in place, but the difficulty of getting a phone into the mount will become a daily frustration that isn’t worth it. For a few dollars more, the Kenu Airframe+ will be a better choice for most people, despite its lack of cable management.