You may not have a computer hooked up to your main living room home theater setup, but perhaps you should should. It’s a great way to get high-end PC gaming on a big screen, makes it easy to stream tons of content not easily accessible through common TV-based apps, and it’s the best way to set up virtual reality in a big living room space.

But the problem of how to actually drive that computer, be it a mini-desktop or a big gaming tower, is a tough one. I’ve tried everything from a standard wireless keyboard on my lap to a gyroscopic mouse I’d wave in the air, but nothing really works seamlessly. 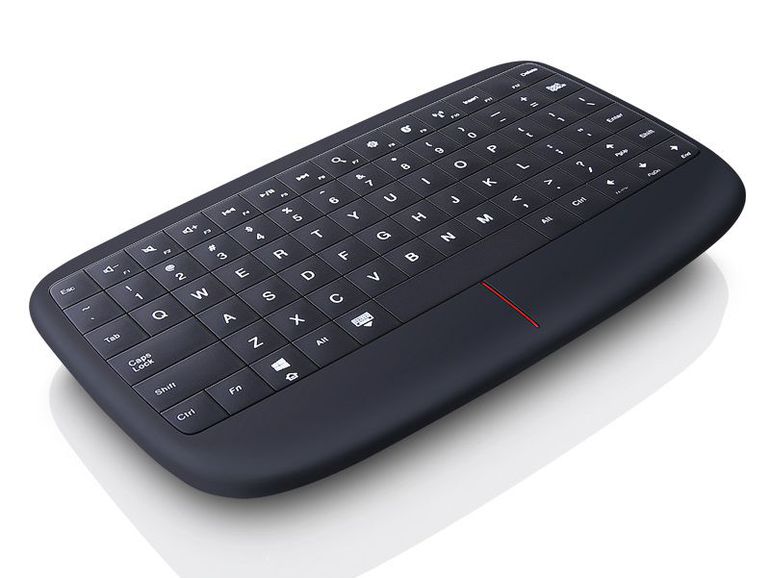 Lenovo aims to solve this problem with the Lenovo 500, launched at CES today in Las Vegas. It’s a multimedia controller that looks like a hybrid of a tiny PC keyboard and an oversized Blackberry. The big difference between this and other wireless keyboards is that there’s still a standard (if small) QWERTY keyboard, but no separate touch pad or pointer. In this case, the entire keyboard surface doubles as a touch pad.

How does it work? Click the keys to type, or swipe your finger lightly over them to use the touch pad. It’s small enough that while holding it in two hands, both thumbs should be able to hit every key and swipe over the entire surface. There are still distinct left and right mouse buttons, as well as a few multimedia shortcut buttons.

There’s a small curve on the back of the Lenovo 500, making it easier to pick up from flat surfaces such as coffee tables, and the estimated range is around 65 feet (20m).

It’s certainly a clever idea, and it addresses a problem that to date has had no definitive solution, but touchpadding by swiping over a keyboard could be tough to get used to. We’ll have to get some serious hands-on time with it to see if it’s accurate enough for navigation, especially if it’s used on high-res 4K television screen.