I am constantly looking for my next mobile gaming fix because I have a job that has a lot of “hurry up and wait” moments. I need games that I can play a few rounds of while waiting for a client, or that I can put away and ignore at a moments notice when the day picks up the pace. Yodo1 Games has an excellent track record of pushing out these kinds of games, with claims to fame such as Crossy Road and Mega Jump 2. Rodeo Stampede: Sky Zoo Safari is the latest gaming offering to come from Yodo1. It’s got a long name, but that name houses a boat load of fun! Let’s take a look.

Jumping into the game is quick and easy. You start off riding on a slow animal. The game then prompts you on how to control your cowboy. The one-handed controls are to simply hold a thumb on the screen to ride on the animals, release your thumb to leap forward through the air. While you’re airborne, there’s an outline on the ground a little bit in front of you. When you touch the screen again, you will lasso any animal in that circle and begin to ride again. Once you learn these basics, the game cuts you lose and lets you start wrangling animals all on your own. 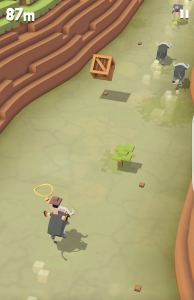 And we’re off to rope us some animals!

This game is a continual runner game with loads of animals for you to ride on. Each animal has a different speed and endurance. If you run out of endurance, your animal will get angry, which will result in different things depending on what you are riding. They could run extremely fast, buck around wildly making it harder to control, or buck you off entirely, sending you flying forward similar to a jump whether you’re ready or not. If you are riding a fast animal, like an Ostrich, you’ll hit some blazing fast speeds, but you’ll run out of endurance much faster. A buffalo is pretty slow, but you’ll be able to take your time to dodge obstacles and line up jumps better since he is much more tolerant of you on his back. There are even some animals that will eat you or otherwise immediately end your run once their endurance runs out, so be careful. Also, the longer your run goes for, the smaller your lasso area gets, so long runs require precision and split second decisions to make it from animal to animal.

As you ride along, the game will point out new animals that you haven’t ridden before. Once you lasso one of these, a circle with a heart will pop up. When the indicator is full, that animal is added to your zoo, will appear in the wild more frequently, and will be available for you to start your run with. There are multiple breeds of each animal, ranging from just slight color variations to some really bizarrely cool creatures, like a tie-dye elephant or an ostrich wearing armor. If you are a collector, there is no shortness of animals to collect. 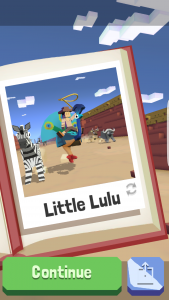 One of the coolest things is the way that the game handles its upgrade system. All the different breeds and variations of animals that you ride on all get added to your zoo and their habitats can be upgraded, which in turn gives that animal type additional abilities or stats. Every couple of hours you can also open the zoo to the public and get ticket sales for the number of habits and upgrades you have. It’s not as involved as some games with their zoo care, but it is a very nice visual touch to an age old upgrade menu.

There are a few in-app purchases, but most are your standard fare. Coin doubler, unlimited revives, and coin packs are available to boost your game. You also have to wait an arbitrary amount of time for missions to unlock after beating the previous one, so there is a purchase for that as well.

The only downside is that it does take a while to really unlock some of the cooler animals and missions. There are boss missions available that offer some unique items, but they only unlock after you complete a bunch of other missions. Having to wait for the next missions to unlock can take a long, long time. Unfortunately, this will probably turn off most players before they get to the more interesting animals and environments.

Rodeo Stampede is a super fun game. There are loads of unlockables and some really cool animals to collect. In-app purchases are unobtrusive and totally optional, but the game progression is much slower without them, and some players may quit before getting to the meat of the game. Overall, it’s a game everyone should take for a spin for the moments when you need to waste a little time.