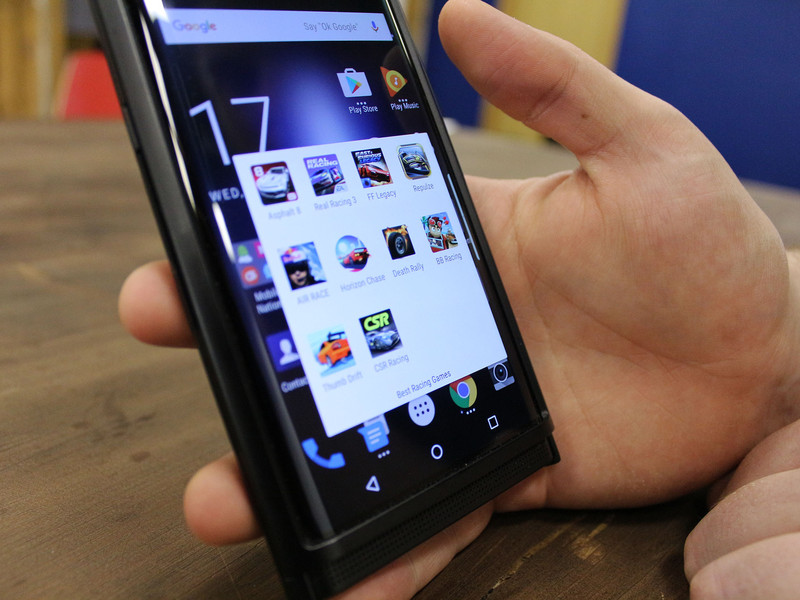 Speed your way past the competition in these outstanding racers for Android!

We’ve rounded up the best racing games to be found in the Google Play Store. With so many options to choose from, we’ve compiled a list that covers a whole slew of sub-genres — from stylized arcade racing to highly realistic racing sims — so no matter your preference, you should find an outstanding game that’s right for you. Let’s hit the road! 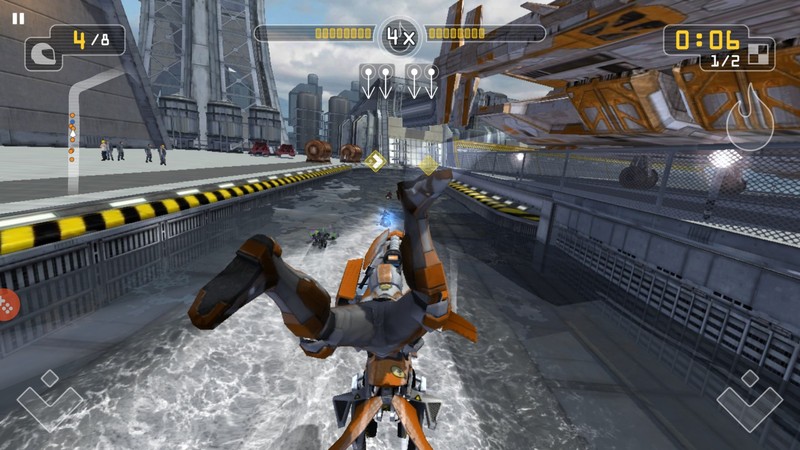 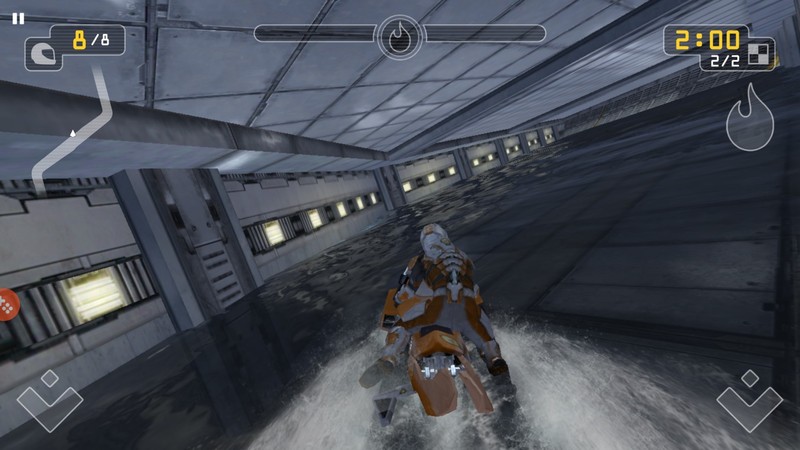 Riptide GP: Renegade is the latest and greatest in futuristic jet ski racing franchise on Android. Harkening back to memories of games like Jet Moto or Wave Race 64, Riptide GP: Renegade features a story-driven career mode alongside options to run a quick race or battle against online opponents. The graphics are top notch, with water and motion blur effects really giving the game a good sense of speed. It uses tilt-steering to control your hydrojet, which is less than ideal, but Bluetooth gamepads are also supported and make things smoother. Speaking of controls, one key aspect of the game is pulling off insane stunts, which are easy to do with quick swipes. There’s plenty to unlock and upgrade as you play through the career mode, and the AI is top notch, providing a real challenge compared to other racing games for Android. You’ll need a pretty good phone to handle the graphics and gameplay, and also plays great on the NVIDIA Shield tablet and Android TV box.

If you’re looking for some tips before diving in, check our our Beginner’s Guide for Riptide GP: Renegade. 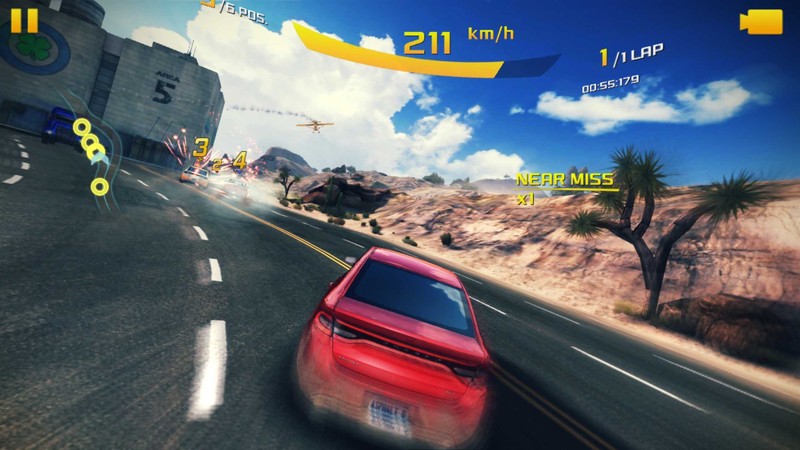 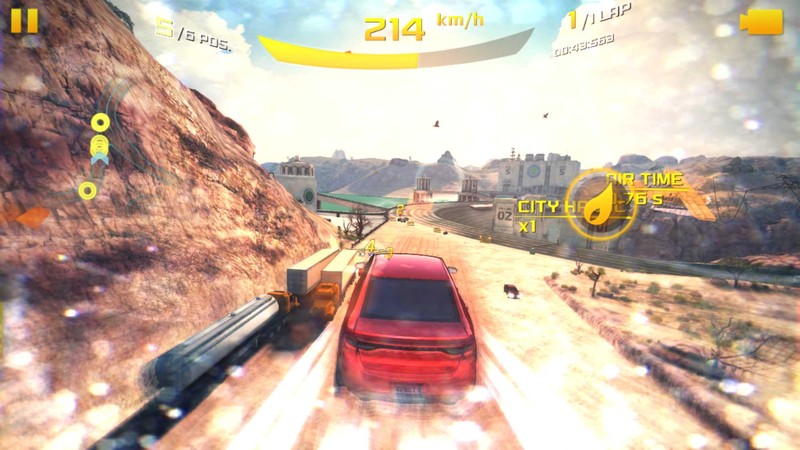 Asphalt 8: Airborne is our favorite racing game on mobile right now. It skips all pretensions of realism and provides an over-the-top, high-octane game with all the fixings. Players can work (or pay) their way through the career mode, unlock new rides, upgrade the ones they have, or take the competition online in staggered or live multiplayer. The usual race modes are there, plus a new ‘Infected’ one where players have to tag other racers before succumbing to an explosive virus. 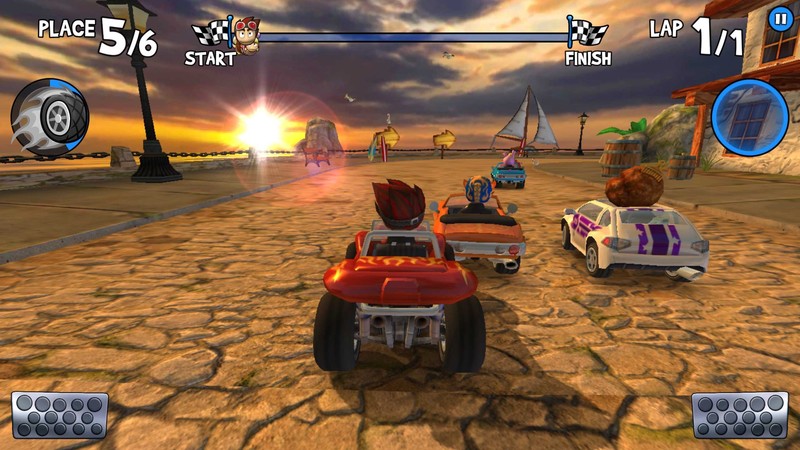 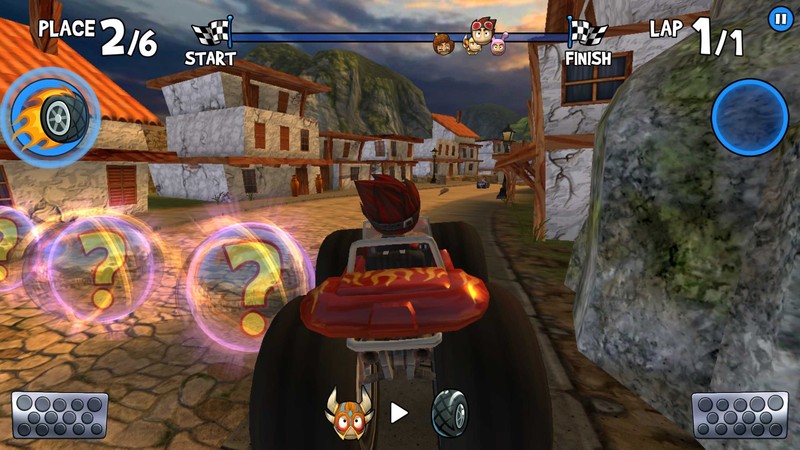 Beach Buggy Blitz is a fun, easy-going racing game where players cruise along the coast of a tropical beach, trying to hit progressive checkpoints before the timer runs out. Gathering coins along the way helps fund your buggy upgrades, but make sure to avoid the various huts, animals, and fellow racers strewn about the course — impacts will slow you down. The graphics are colorful and smooth, including some nice water, dust, and lighting effects.

Hop into Beach Buggy Blitz if you’re looking for something light and kid-friendly. 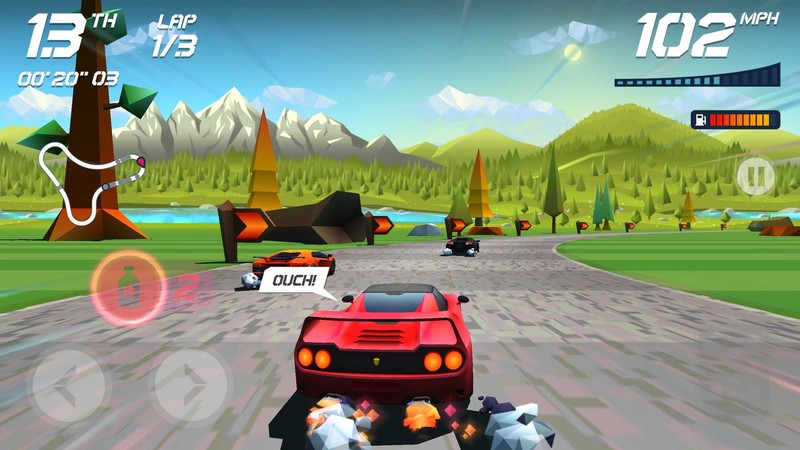 Horizon Chase is a fun retro-style racer with gameplay reminiscent of the of the classic 80s arcade racer Pole Position. Featuring bright and colorful retro graphics over 70 tracks spanning 32 cities, there’s plenty of fun to be had here. You start each race from the back of a 20 car pack, and must weave your way past your opponents to take the crown. Keep winning to upgrade and unlock up 16 available cars.

You get to play the San Francisco tracks but then must pay to unlock the full game. Given how beautiful and fun this game is, we bet you will. Red Bull Air Race is a faithful mobile version of the real-life air races that Red Bull holds around the world. Jump behind the controls of your very own plane as you start down your career path to becoming a Master Class pilot. Courses are based on their real-life counterparts, and span the globe.

Whether you’re a fan of the race series, or just want to live the dream of being a pilot, this game is legit. 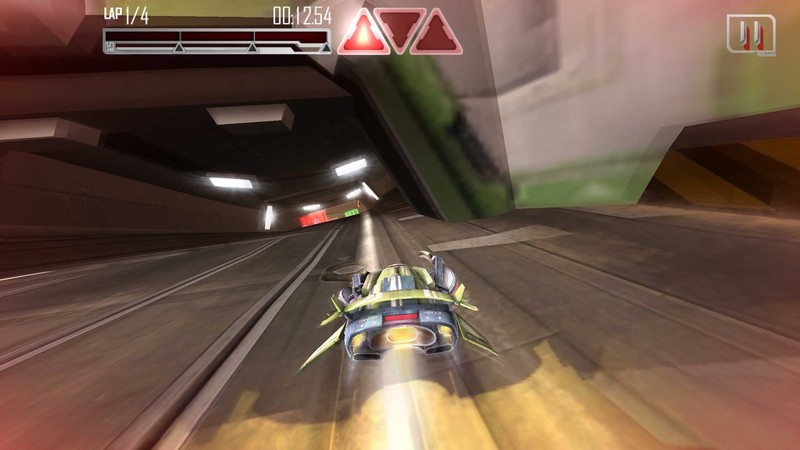 Repulze is proof that not all great racing games require wheels. If you’re a fan of the F-Zero or Wipeout franchises, you’ll love Repulze. Race through 24 winding, gravity-defying tracks in experimental hovercrafts. Another thing that sets Repulze apart from other games is the way you collect turbo boosts. Based on your craft’s polarity, you either aim to go through green or red gates, which unlock boosts. And the whole game is wrapped up in an overarching storyline about the evil corporation controlling everything from the shadows.

Repulze is a fantastic, futuristic racer that’s definitely worth the $0.99 price tag. 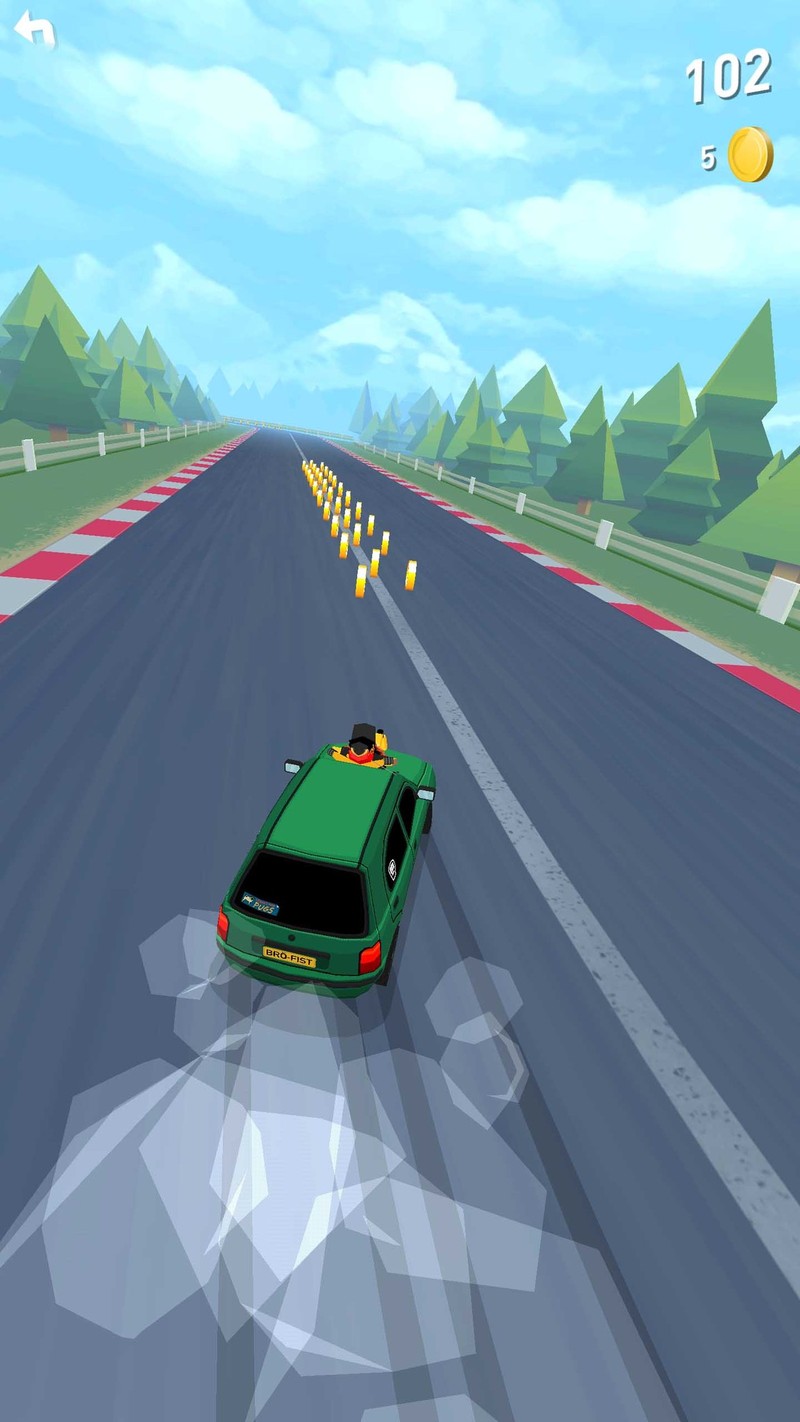 Want to race, but only have one hand free? Thumb Drift is the perfect game for you! Featuring charming graphics and a simple premise, your goal is to drift sideways through four increasingly challenging courses. With over 70 cars to buy via in-app purchases, or unlock randomly using coins collected on the track, there’s hours of mindless fun to be had here.

Thumb Drift is the casual, endless racer you’ve been waiting for. Real Racing 3 is bound to keep gearheads entertained. It puts real brand-name cars on real-world tracks – hence the name. It features an interesting asynchronous multiplayer system whereby lap times are recorded from your friends, and you race against a bot that’s driving at that time. Of course you can bump them out and affect their track time, and there’s a single-player career worth playing through too. Over time, players earn new cars and can upgrade various mechanical bits with their winnings, but make sure you take it easy on your car — you’ll have to keep your ride in good condition to avoid repair costs.

Real Racing 3 is absolutely gorgeous, and the white-knuckled racing action will keep you coming back for more. Fast & Furious Legacy is a racing game based on the popular action movies. The game features a good mix of different races and missions. Hit the nitro and blast past your opponents in street races, drag races, drift races. Winnings are spent on upgrading rides to take on bigger and badder challenges as you progress through the story mode, featuring all your favorite characters from the film franchise. Death Rally is a gritty, combat-heavy top-down racing title. Players deck out their ride with all manner of Mad Max-style weaponry and eliminate competitors in races and straight-up death matches. Weapon parts litter every battlefield, as well as cash bonuses and nitro speed boosts. The nice thing about Death Rally is that even if you don’t place first in a race, you can still walk away with a fair bit of cash just from blowing up opponents.

Death Rally is a great title for those looking to unload a bit of road rage. CSR Racing is a clean-cut drag racing game. Players needn’t worry about steering — all you have to do is perfectly time your gear changes. Indicators tell when to make your next shift, and assuming your timing is up to snuff and your ride is amply upgraded, you should pull across the finish line before your opponent, and earn some winnings. Premium currency can be used to buy high-end cars, while the standard currency can be used to buy the others, as well as upgrade specific parts such as the gear box, engine, intake, and body.

This article was originally published in June 2016. It was updated in November 2016 with Riptide GP: Renegade added.

Read more from News
News
← You can grab a $94 discount on the ASUS OnHub router today!
How to play Google Cardboard games in Daydream →