If you’re looking for a deep, intensive, complex gaming experience… you’ve come to the 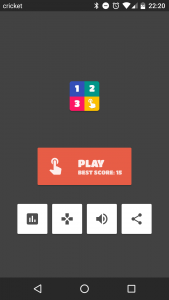 wrong review. For this is a review for Tap Numbers, a well-done but very, very simple gaming experience on your Android device.

The game comes from the developer MateriUp. It’s a type of match game that is very friendly for all ages. Let’s take a fairly quick tour of this game. 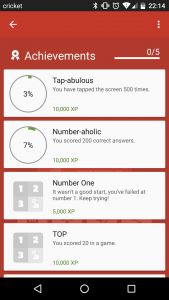 Like the rest of this game, setup is dead-simple.  Just download from the Google Play Store, and click on your shiny new icon. From there you jump right into the game. Done.

There are some simple settings (sound effects, music on/off, etc.), and an achievements screen; but there really won’t be much use for these for most folks.

How to explain this and give the game the credit it deserves? Upon entering play, you are given a random number which immediately begins counting up. Directly above is a static number within a circle. You only job is to tap the screen when the ascending bottom number matches the static one above. 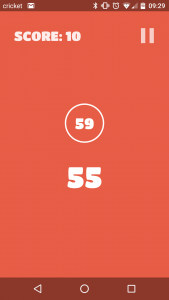 That’s it; that’s your only job.

If or when you do stop the count-up so both numbers match, you are immediately transferred to a new screen with an new static number to match. The goal is to survive, matching the number you’re given and moving on. The risk is either tapping too soon or too late, missing the number-match. You are scored a point for each match you make. If you do miss, your game is immediately over and you must begin from zero.

There is a bit of variation to the game, but it lies specifically with the speed of the counting-up of the numbers. When you begin play, the game moves very steady, and fairly pedestrian in its pace. This allows you to get used to the game and find your groove.

But, after a few rounds of this easy speed, the pace begins to waver. At first it will speed up slightly with each round, and though the increase is incremental and rather expected, it does a good job in ramping up the tension.

The real challenge lies in once you get to the upper levels of your game. With this variation in speed also comes a variation in the difference between your goal number and the number you start with.

In the beginning most/all of your numbers are at least separated by 5; this gives you a decent amount of time to gauge the speed in which to anticipate your tap. But as you progress through the levels, this difference in numbers you start with starts to vary. One level you may have a difference of 7, then 4, then 11, then 3, then 6, 2, 8, 3, etc.

Coupled with the speed variation, getting to higher levels drastically increases the difficulty of this game – as simple as it seems. Sometimes the best tweaks to a game lie in its simplicity, and that’s what you have here. The upper levels are just as difficult for adults as it is for kids, and that makes Tap Numbers a great game for family members to challenge each other with. 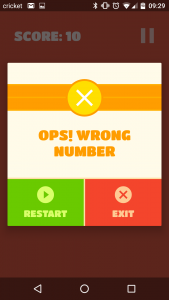 Read more from Software
App
← Samsung is trying to sell a Galaxy Note 3 on Black Friday and it should feel ashamed
Watch the US launch a next-gen weather satellite at 5:10PM ET →