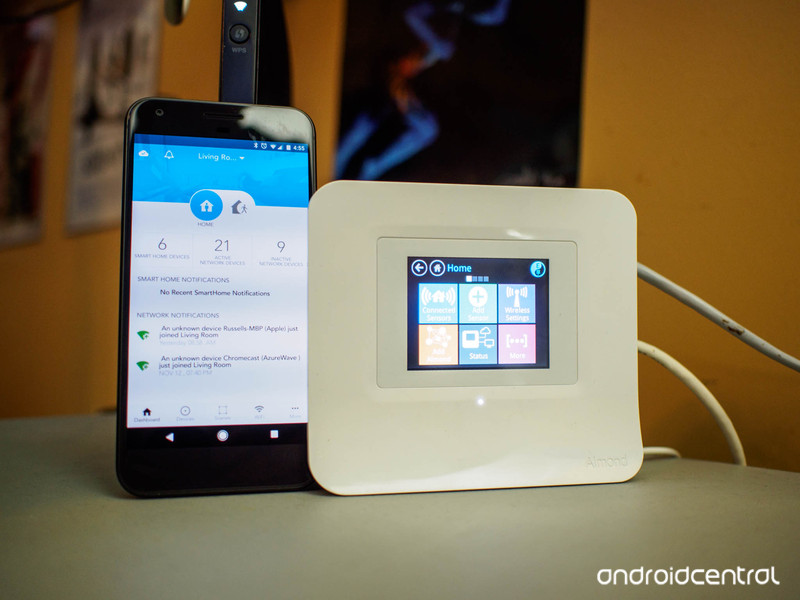 Sometimes all-in-one is perfect. Other times you need to spread out a bit.

Despite how much work happens inside their soft plastic casings, few people look at routers as computers that can complete multiple tasks. These are boxes you plug in, set up once, and forget about until something goes wrong. It’s nice to know you can do that and have your internet behave itself most of the time, but there are a couple of companies wondering out loud if routers can not only be smarter, but exist in a way that we as users look on them to do more.

One of these companies is Securifi, and for a little while now this team has been working on Almond, a smarter router that also controlled all of your connected home tech. Their latest efforts exist in the new Almond 3, which adds new mesh networking skills and a suite of Almond-branded connected home tech to turn your router into a hub for your whole house. 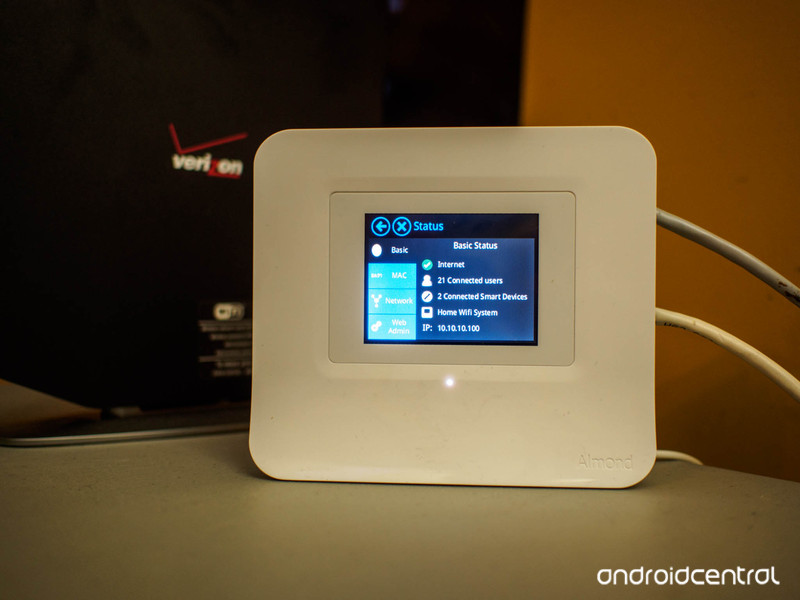 Like previous versions of Securifi’s hardware, Almond 3 looks like a chunky tablet with a bad screen to bezel ratio. The little touch screen in the middle of this router allows you to access everything you could possibly want to do with this equipment, including launching a built-in browser to check on web settings. It’s not a big enough screen to really enjoy swiping and tapping with your thumbs as you hold the router in your hand, which is why there’s a little stylus baked in to the top of the box. If you’re planning on typing on this thing, you’re going to want the stylus to get you through it.

Almond 3 couldn’t be much easier to set up. Connect Ethernet and power, wait a minute while the OS fires up, and you’re ready to input a name and password for your network. Where things get interesting is in deploying multiple Almond units in a mesh network. There’s a lot of flexibility offered here, which is a breath of fresh air compared to a lot of other consumer mesh kits. You can set your mesh up entirely over Ethernet so every access point has the same kind of connection, and if your house isn’t fully wired for that you can set up wireless mesh to extend your network to other parts of the house. The Almost software treats it all the same way, which means adding is simple, regardless of your configuration.

Once you’ve set the network up how you like, you can start adding your connected home tech. Network discovery on Almond detected obvious things like my Hue lights right away, and the connected home kit Securifi sent included several important security tools. Door sensors, connected outlets, and trigger buttons for custom programming are all possible through this setup, but if you already have connected home gear in your house you’ll be able to add some of that as well. Basically anything that uses the Z-Wave mesh protocol can be connected to Almond 3, and the router treats all connected gadgets equally.

Unfortunately, a simple set up process and feature-filled connected home tools are not the same thing as quality networking equipment. My deployment failed to deliver the same level of performance I usually get with my single Apple AirPort Time Capsule, both in speed delivered over the network and signal strength throughout the house. In almost all of out tests, smartphones and laptops failed to jump from the central router to any of the external mesh routers, which meant quality suffered. When connected directly to the router via Ethernet, my desktop pulled down only 96/80 megabits instead of the 150/150 I usually get from my Verizon FIOS connection. When I asked Securifi about these issues, I was asked to send them logs to help diagnose the issue with a note of assurance that my experience was unusual. 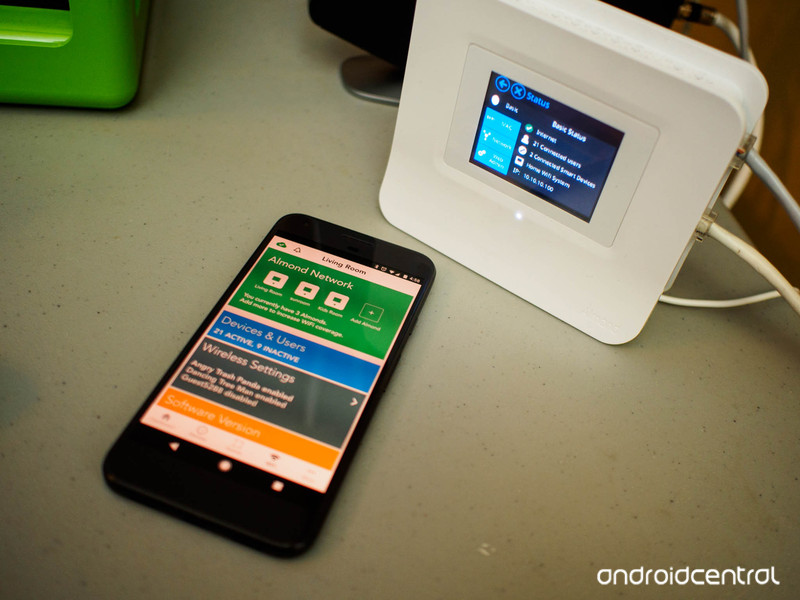 Put simply, every router should be as feature-complete as the Almond 3. From the router itself you can look at what devices are connected and heaps of details about the hardware. You can name each device to make it easier to look for later should something go wrong, and you can set those devices to act as “presence sensors” capable of triggering connected home scenes from within your connected home. I was able to create an IFTTT trigger that added the date and time my daughter connected to WiFi into a spreadsheet, which on its own is kind of awesome.

The best part is that none of this needs to ever be done from the software on the Almond 3 itself. The Almond app offers nearly every feature you can find on the router itself, and you don’t even need to be connected to the network in order to access the router. From your phone you can monitor what devices are connected to your networks, change the SSIDs and passwords on the fly, set up guest networks, and trigger an away command that restricts network functionality when you aren’t home. It’s a robust system, perfect for houses that have a lot of people going in and out.

Combined with IFTTT integration, there’s a ton of flexibility in creating the exact home experience you want.

For the connected home enthusiast, you also have the ability to create scenes. If you want the lamp in the living room to light up when you get home, or set alarms to go off from the routers, you can do so from the Scenes tab. This tab grows more capable as you add hardware to Almond 3, which in turn helps make this an actual connected home hub for your setup. Combined with IFTTT integration, there’s a ton of flexibility in creating the exact home experience you want.

More of this, please 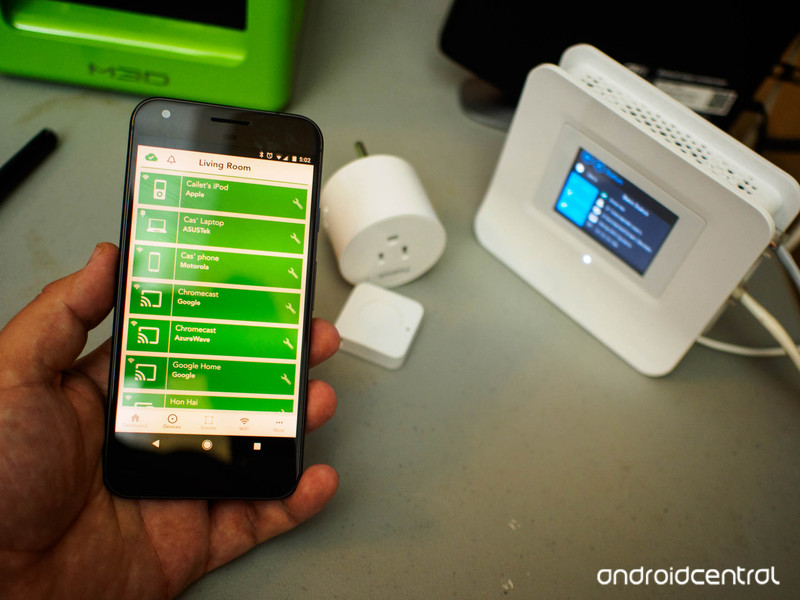 Despite my issues with performance, I’m a fan of the way Almond 3 functions. I like the idea of a router being the actual hub of the house. Something controlled from your phone that allows you to monitor the network when necessary and make adjustments quickly. All of the quality of service monitoring I appreciate as a more technical user, with a user interface simple enough that everyone in my family can appreciate it if need be. It’s a fantastic way to jump into a new kind of home networking, assuming Securifi can deal with the performance issues I’ve encountered so far.