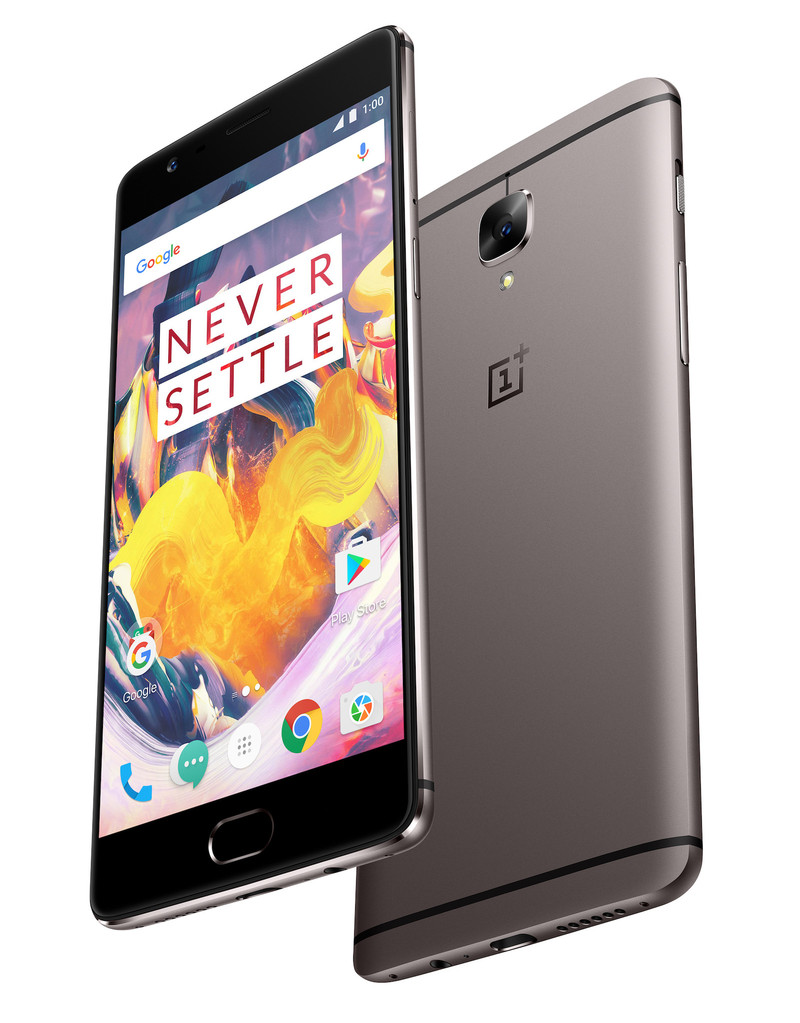 Less than 6 months after launch, the OnePlus 3 gets a refresh with new specs and a higher price.

OnePlus has really led the charge in the popularity of high-end phones being sold at a mid-range price, and it’s doing something interesting with the mid-cycle refresh of its latest flagship the OnePlus 3. The new model is simply called the OnePlus 3T, and it brings some new internal specs, a fresh color option and new software to what is already regarded as one of the best phones you can buy for just $400.

So let’s start by laying out the groundwork of what hasn’t changed. In terms of external design, physical dimensions and display, things are identical to the OnePlus 3. You get the same solid aluminum build, USB-C port with Dash Charge, fingerprint sensor and 5.5-inch Optic AMOLED display at 1920×1080 resolution. The phone still has 6GB of RAM and a base storage of 64GB, plus dual SIM functionality.

Now, what’s new? Well there are two big spec changes: the phone now runs on the absolute latest Snapdragon 821 processor, and has bumped the battery capacity over 10% to 3400 mAh in total. Those two specs will propel the already-strong OnePlus 3 battery life even further. Then we come to the smaller things: the front camera is now 16MP, the rear camera is unchanged but has a new scratch-resistant sapphire covering, and you now have an option to buy the OnePlus 3T with 128GB of internal storage if you choose. The OnePlus 3T also introduces a new “gunmetal” color, and the previously released “soft gold” color is also available.

Here’s the one rub, really: the OnePlus 3T still ships with Android 6.0 Marshmallow, though that shouldn’t be too surprising considering the original OnePlus 3 doesn’t yet have its Nougat update. OnePlus says that the latest OxygenOS customizations have improved performance and refined a few new features as well — and if you’ve used a recent OnePlus phone you know its software is quick, light and unobtrusive while also being more customizable than most.

This is definitely worth $439, no matter how you feel about the mid-cycle refresh nature of it.

You shouldn’t put a ton of stock in the exact software you see here, though, as OnePlus has already committed to releasing Android 7.0 Nougat to both the OnePlus 3T and original OnePlus 3 by the end of the year. When that new software arrives it should take on many of the extra features we’ve come to expect from OxygenOS, as well as the new levels of performance OnePlus is touting on the OnePlus 3T, but things can change a bit when you make a big jump to a new platform version. Going forward, OnePlus says that both versions of the phone will be on the same software release schedule — nobody’s being left behind.

With all of these spec and feature bumps, the OnePlus 3T is also seeing a price jump — up to $439 in the U.S., which is $40 more than the OnePlus 3 debuted at. Similar price jumps set European pricing at €439 and UK pricing at £399. If you want to go for the 128GB storage option (as many will) you’ll pay just $40 more, bringing the total price to $479. The gunmetal OnePlus 3 will launch in the U.S. and Canada on November 22, with a worldwide launch to a dozens of countries on November 28. The soft gold color option will come shortly after launch.

LONDON – November 15, 2016 – OnePlus today announced an upgraded addition to its premium flagship lineup, the OnePlus 3T. Staying true to the company’s Never Settle mantra, the OnePlus 3T builds on the success of the OnePlus 3, offering key hardware and software updates inspired by feedback from the active OnePlus community.

“At OnePlus, we are constantly striving to provide a better product and user experience for our customers, who are some of the most discerning and tech-savvy users in the world,” said OnePlus Founder and CEO Pete Lau. “We developed the OnePlus 3T to bring significant improvements with new technology that is available today, so that our customers do not have to wait for the best possible user experience.”

Dash Charge – A Day’s Power in Half an Hour

One of the fastest charging technologies on the global market, Dash Charge provides a day’s power in half an hour of charging, even while performing activities such as video streaming, graphic-intensive gaming or using GPS to navigate with the Dash Car Charger (also available on OnePlus.net). The OnePlus 3T also sports an upgraded 3,400 mAh battery, a 13 percent increase from the OnePlus 3, providing enough power to get users through the day and beyond. Dash Charge stays cooler than other fast charge solutions by carrying more current and shifting the power management process from the phone to the Dash Charge adapter, so a vast majority of the heat generated while charging never reaches the device. Along with five custom safety measures in place to safeguard the adaptor, cable and phone itself, users can charge the OnePlus 3T as fast as possible without worry.

“OnePlus has proven once again that it never settles for anything less than the best. Using the Snapdragon 821 chipset, the OnePlus 3T gives the OnePlus community superior speed and performance in a beautifully designed smartphone,” said Alex Katouzian, Senior Vice President, Product Management, Qualcomm Technologies, Inc.

Featuring 6 GB of LPDDR4 RAM, the most found in any smartphone available today, the OnePlus 3T can handle next-level multi-tasking, including resource-intensive apps and games, without delay or lag.

The OnePlus 3T’s design brings together the most premium materials and acute attention to the smallest details to give users a sleek and bold flagship smartphone. Each OnePlus 3T phone is carved out of a single slab of premium space-grade aluminum alloy for a seamless and resilient build, with fine details such as chamfered edges around the USB type-C port and speaker grill.

At 7.35 mm, the metal unibody is light and comfortably thin. Our new Gunmetal color gives the OnePlus 3T a bold look, while the Soft Gold version offers a subtle elegance. The stunning 5.5-inch 1080p Optic AMOLED display produces colors that are more vivid than other AMOLED displays while offering excellent battery life. Users may also choose to customize the display calibration or switch to sRGB mode for highly accurate color reproduction.