The latest Gear smartwatches up the features, but also the price.

Samsung’s new Gear S3 watch line — which comes in both a Frontier and Classic model, the former with optional LTE — is coming to the U.S. starting November 18, with pre-orders kicking off on November 6. After being unveiled back in September at the IFA show in Berlin, we hadn’t heard much about the latest wearables throughout the Note 7 recall saga. 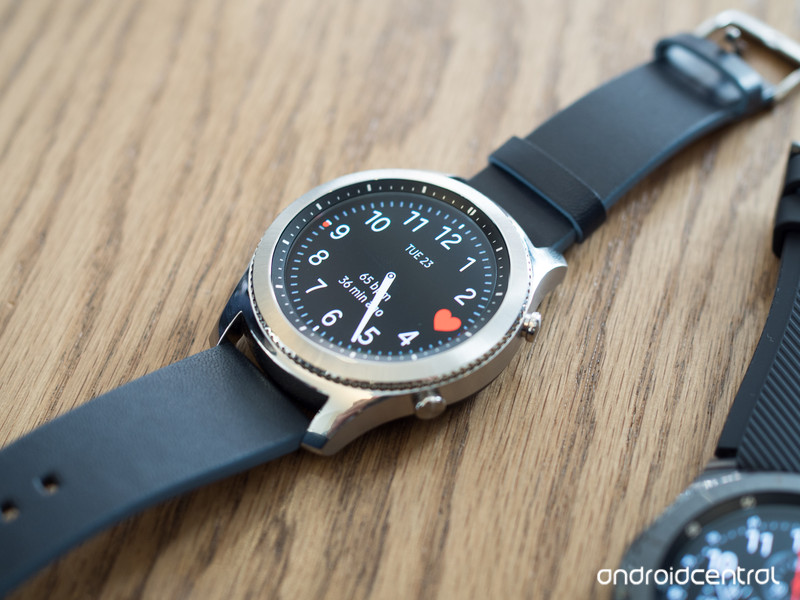 For a quick refresher, the Gear S3 Classic and Frontier both offer a more traditional look, in line with the Gear S2 Classic from last year, and are much bigger than their predecessors, with 46mm cases, 1.3-inch displays and nearly 13 mm thickness. Both are IP68 water resistant, and the Frontier is constructed for extra ruggedness as well. That also means there isn’t a “sporty” design option anymore, so your only choice there is last-year’s Gear S2, which will remain on sale and get the new Gear S3 software experience.

That new software experience lets you do even more on the watches, emphasizing the twisting bezel instead of direct tapping on the display. The standalone capabilities go even further if you choose to get the Frontier LTE model, which will be available from AT&T, T-Mobile and Verizon. All Gear S3s will offer GPS inside, as well as more RAM and beefier batteries, adding an extra day of use over previous models and offering the Frontier LTE model the same use as the old non-cellular version.

Prices and sizes have both gone up with the Gear S3.

The Gear S3 also incorporates Samsung Pay functionality, including the Samsung-exclusive MST tech that lets you use the watch on traditional card swipe payment terminals.

We don’t have a full slate of pricing for the Classic, Frontier and Frontier LTE, but we do know the lowest-end Gear S3 will set you back $349. That’s the same starting price as the Gear S2 Classic last year, and a bit of a relief as we initially expected the prices to be even higher — though chances are the Gear S3 Frontier with LTE will be considerably more expensive than any Gear S2.

Samsung hasn’t announced individual retail partnerships, but you can of course expect Samsung’s own store and a wide variety of stores to carry the Gear S3 Frontier and Classic, just like last year’s models.

RIDGEFIELD PARK, NJ – November 3, 2016 – Samsung Electronics America, Inc. today announced the forthcoming preorder availability of Gear S3 LTE and Bluetooth models, a striking and innovative smartwatch that further solidifies Samsung as a leader in connected wearables. The cutting-edge timepiece will be available in two designs – the rugged Gear S3 frontier, and the sleek Gear S3 classic. Starting at $349.99, Gear S3 will be available at retailers including Best Buy, Amazon, Macy’s and Samsung.com, as well as participating wireless providers.

“Consumers are increasingly recognizing the benefits of a smartwatch that operates even without their phone,” said Gary Riding, senior vice president of Product Marketing at Samsung Electronics America. “With the LTE capability of Gear S3 it is easy to make or receive phone calls and read or reply to texts and notifications, so they can stay connected while leaving their phone behind.”

Available in two designs, “frontier” and “classic,” and featuring the distinctive rotating bezel, the Gear S3 joins Samsung’s diverse portfolio of wearables. The Gear S3 showcases a design perfected by Swiss watch designer Yvan Arpa. The sophisticated design is combined with IP68 water and dust resistance1 and military-grade durability to protect against extreme temperatures, scratches and impact, making it the ideal smartwatch for the toughest conditions. Consumers can also customize their Gear S3 to fit their lifestyle or mood, thanks to thousands of available watch faces and the ability to swap out the band for any standard 22mm offering.

The Gear S3 puts convenience at your wrist, with Samsung Pay providing the ability to make mobile payments virtually anywhere you can tap or swipe a credit or debit card. With Magnetic Secure Transmission (MST) and Near Field Communication (NFC) support built-in, Gear S3 users will be able to make a purchase with Samsung Pay which is widely accepted across the U.S. Samsung Pay on Gear S3 protects credit card information with the same advanced security as Samsung Pay on a Galaxy phone, using tokenization, Knox and PIN protection.2

The LTE version of the Gear S3 frontier enables wearers to receive calls, texts and alerts, listen to music, track fitness routes or download apps even when their phone isn’t nearby. With all models featuring a built-in speaker and microphone, even the BT version allows consumers to make and answer calls – without ever having to reach for their phone.3

Built-in GPS adds to the connectivity, empowering wearers to easily monitor their daily fitness activities and share their location with friends or in the event of an emergency with safety functions like the SOS feature. The S Health app makes it simple to not only track activity and heart rate, but also to set goals, post results and check leaderboards

Used as a standalone device, or as part of the Samsung Galaxy ecosystem, the Gear S3 offers an all-in-one wearable experience that seamlessly fits into – and enhances – any lifestyle.

The LTE4 version of the Gear S3 frontier will be available from AT&T, T-Mobile and Verizon. Wireless providers will share availability and pricing.