Razer has definitely made a name for itself in the world of gaming notebooks, but for the past few years, the Blade family of laptops has had a black sheep: The Razer Blade Pro. This 17-inch machine was the company’s original thin gaming notebook, but it lingered in obsolescence after Razer introduced the more popular 14-inch variant and, later, the Razer Blade Stealth. For years, the smaller machines were given modest CPU, RAM and graphics updates while the ironically named “Pro” lagged behind with a 4th generation Intel processor. Those days are over. Today, Razer announced that the 17-inch Razer Blade Pro is back — and it’s finally going to live up to its moniker.

Razer is calling the new Blade Pro the most powerful system its ever built, and indeed, this thing is a beast. An Intel Core i7-6700HQ CPU, 32GB of RAM and NVIDIA GeForce GTX 1080 graphics pulse under the aluminium chassis. That, by the way, is as thin as ever, measuring 0.88-inches at its thickest point. The laptop also has a dizzying collection of ports, including a Thunderbolt 3 connector, three USB 3.0 ports, HDMI output, a 3.5mm headphone jack, an Ethernet jack and an SDXC card reader. All that, plus the new Blade’s 17.3-inch 4K display, are more than enough to qualify it as Razer’s “Pro” laptop — but that said, there is one thing missing from the flagship gaming machine: Razer’s iconic Switchblade interface. 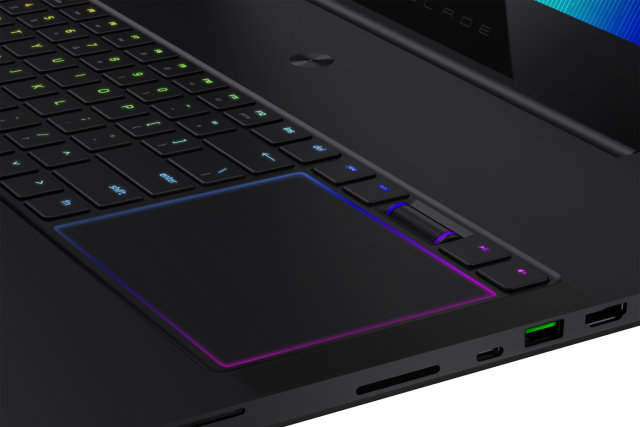 The Switchblade interface used to be integral to the Razer laptop brand. It was a set of ten customizable keyboard buttons that each housed their own tiny screen. Paired with a trackpad that also featured its own display, it allowed users to create a custom set of keys to fit any application. It was neat, but Razer told us it was eliminated to make way for “more performance focused components.” That doesn’t mean the Razer Blade Pro’s keyboard isn’t special, though — the 17-inch Blade Pro will be the Razer laptop to feature its new “ultra-low-profile mechanical switches,” which are supposed to emulate the actuation of a full-size mechanical keyboard.

So, what’s a thin, 17-inch gaming laptop with the latest graphics technology, a ton of RAM, a 4K display and the world’s thinnest mechanical keyboard cost? At least $3,699, possibly more if you want more than 512GB of SSD storage. Razer doesn’t have an official launch date yet, but expects to start shipping orders sometime next month.