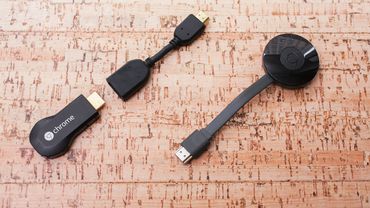 Google’s Chromecast is one of the easiest and most affordable ways to wirelessly throw content from your phone, tablet or computer onto your television. While it may not seem feature-packed on the surface, there are a lot of things Chromecast can do that aren’t immediately apparent.

Below you will find 16 tips and tricks to help you get a better understanding of Chromecast.

Use your photos as wallpapers

When you’re not using your Chromecast, it basically turns your television into a giant digital photo frame, displaying hand selected photographs of beautiful scenery.

If you want to use your own photos, download the Google Cast application to your Android or iOS device, open the Devices tab and select Edit Backdrop. There you can enable Google Photos, Facebook and Flickr. If you no longer want to see the photos Google has selected, you can disable Featured photos, Earth and space and Art.

Get headlines instead of wallpapers

Within this same Edit Backdrops screen, you can also opt to get news headlines. For this, there are two options: Curated News, which is hand picked by Google, and your own news via Play Newsstand. To control which feeds appear in your personal news feed, you will need to open the Play Newsstand application and edit which sites you want to follow there. Changes made within the app will automatically appear on Chromecast.

You know the standard apps that support Chromecast — YouTube, Netflix, Pandora, etc. But what else can you stream to your TV? To find out, all you have to do is open the Google Cast app on your phone and select the Get Apps tab.

All the apps that support Chromecast can be found here, as well as in the Google Play Store itself under the Google Cast category.

Chromecast’s highlight feature is streaming video from YouTube, Netflix and any other application that supports it. However, if you’re an Android user, you can mirror your device display to any TV. Just pull down the notification shade and tap Cast. Select which Chromecast you want to mirror to and your entire screen will be streamed to the television.

Sadly, this doesn’t work well for streaming local videos, as the framerate is typically pretty low and audio gets out of sync very easily. What it does work well for is showing your locally stored photos to multiple people in the room at once or browsing the web on a larger screen and using the phone as more of a controller.

If you want to do the same with your desktop, you only need Chrome installed. Casting features are now baked into Chrome itself, so you no longer need the Chromecast extension.

To mirror your entire computer desktop to Chromecast, open Chrome and click the action overflow button in the top right corner. Click Cast and click the downward arrow next to Cast to. Select Cast desktop, choose the Chromecast you want to mirror to and, finally, click Cast to begin mirroring.

Keep in mind, this will not play the audio from your computer through the TV. Audio will still come out of your computer’s speakers.

Since mirroring your desktop doesn’t support audio and generally has a pretty terrible framerate, you will need to use a different method to stream local videos and content to your Chromecast from a desktop.

On a Mac, just drag a video file into a Chrome tab or press Command + O and locate a video. From within Chrome on Windows, go to File > Open or press Ctrl + O and locate a video file to open it in Chrome. From there, enable the Cast feature as usual. This does tend to drop frames from time to time and audio can sometimes get out of sync with the video, but shy of using a third-party solution that costs money or uploading everything to a private YouTube channel, this is the easiest way to stream your local videos or pictures to Chromecast.

The other option for streaming videos or movies that you own to Chromecast is using a service like Plex. Basically, you sign up for free account, add your media to that account using the Plex Media Server app and download the Plex apps.

Power it using your TV … maybe

If you have a TV made in the last 8 years or so, it likely has a USB port around back. Since the Chromecast is powered via USB, you can simply plug this cable into the open USB port on your television. In most cases, this USB port will be sufficient for powering your Chromecast.

Turn on your TV

The confusing part with this is that each manufacturer calls HDMI-CEC something different. You can find all the different names for it and more about how to get it running here.

If you want to use this, the above tip is probably not the best route for you. With most TVs, power to the USB port is cut when the television is off. To use HDMI-CEC, you will most likely need to power the Chromecast independently of the TV.

Get an Ethernet adapter

If you have friends or family over and they want to cast something to your television, you can make it very easy for them. Just enable Guest Mode by opening the Google Cast app, switching to the Devices tab and hitting the action overflow button on the Chromecast you want to use. In that menu, tap Guest Mode. Any nearby devices should connect to the Chromecast without being on the same network.

The way this works is Chromecast emits the 4-digit PIN to nearby devices by using an audio tone that you can’t hear. If the guest’s phone does not detect the audio tone, they can simply enter the PIN manually.

Play/Pause control with a TV remote

The worst part about streaming a video or movie to your television from your phone is having to unlock your phone just to pause the video. However, if your television remote has play and pause controls, you can simply use those to control the Chromecast without having to reach for your phone.

After the initial setup of Chromecast, you typically don’t need to mess with the settings or the hardware. If something goes awry, however, you might need to factory data reset (FDR) the device. This can be done in one of two ways:

Within the app, in the same location as the FDR option, you can also reboot the Chromecast if it’s acting up. You might want to try this before a FDR to see if it fixes any issues you’re having.

Cast on the go

If you’re leaving on vacation and don’t want to be stuck to the underwhelming hotel cable selection, you can take your Chromecast with you. Just take a travel router or your laptop with you and an Ethernet cable, as well.

Once in the hotel room, plug your router or computer into the Ethernet jack in the room, setup a wireless network and connect your Chromecast. Then you can watch YouTube, Netflix or anything else you typically watch with your Chromecast while on vacation.

You’ve always been able to use Chrome to stream your Google Slides presentations to Chromecast from a computer. But now the Google Slides app has Chromecast support, as well. This means if you create a presentation with Slides, you can quickly and easily use your phone to present a slideshow or presentation.

Once you install and open a game compatible with Chromecast, look for and tap the Cast logo to stream it to your TV. You can then use an Android or iOS device as the controller. For multiplayer games, you can use multiple phones as gamepads.