Following a sketchy rumor last week that said Apple is planning to introduce a “Deep Blue” color option for the upcoming iPhone 7, Japanese blog Mac Otakara has clarified to AppleInsider that the new color will actually be a “much darker” variant of space gray that is “close to black, though not quite black.”

Monday’s indications from Macotakara sources appear to be a clarification from earlier reports that suggested Apple would ditch space gray for a “deep blue” color option. Sources who claim to have seen the next-generation iPhone coloring apparently mistook the darker space gray for a blue shade.

The so-called “new, darker shade” could more closely resemble the look of the “space black” stainless steel Apple Watch, pictured below, which is darker than the “space gray” aluminum Apple Watch Sport. Meanwhile, Apple will reportedly continue to offer the iPhone 7 series in silver, gold, and rose gold color options.

Apple has used different shades of “space gray” and “black and slate” across its iPhone, iPad, Mac, and Apple Watch lineups over the years. The iPhone 6s and iPad Pro, for example, each have a lighter shade of “space gray” compared to the iPhone 5s and original iPad Air respectively. 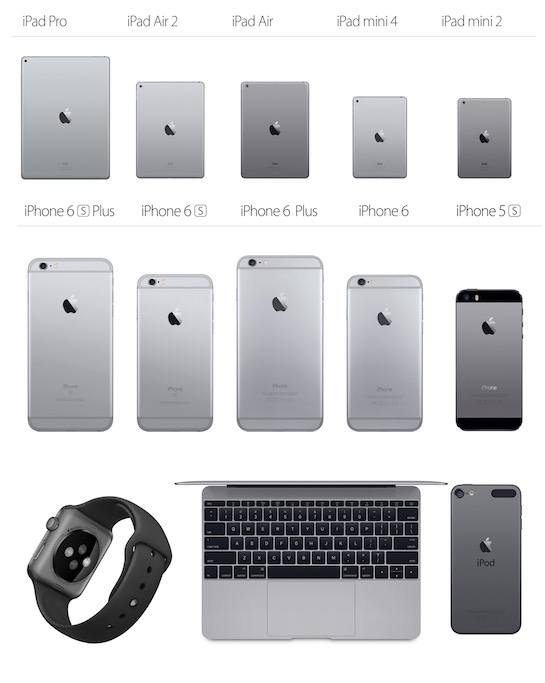 Apple’s vision of “space gray” has changed over the years (MrHarryT via Reddit)
Apple is expected to announce the iPhone 7 and iPhone 7 Plus/Pro in September. The 4.7″ and 5.5″ smartphones are rumored to feature a thinner iPhone 6s-like design, sans a 3.5mm headphone jack, while each may have a faster Apple A10 processor, improved waterproofing, repositioned antenna bands, and faster LTE and Wi-Fi. A dual-lens camera and 3GB of RAM may be exclusive to the 5.5-inch model.