20 most ridiculous inventions ever created, you won’t believe what you’re about to see

Some inventions are better than others, then there are some that should never have seen the light of day. Well, maybe they should, if just to make us laugh.

From solar bikinis to a nose worn stylus, these are here to shock. Designers the world over have been creating gadgets that shock. Some might actually be of use but in the real world are they ever actually going to be used? In public? That decision is down to you, so you’ll need to see what’s out there. Some of them we really can’t imagine in the real world outside of these images.

We’ve collected the most ridiculous, insane, weird and downright odd inventions that have ever been made or conceived.

While plenty of these you can’t lay your hands on, not that you’d likely want to, there are some still available to buy. So if you want to treat this as your slightly off-the-wall shopping list, go for it.

Be warned some of these are shocking, one in particular which we’ve pushed towards the end so you can build up to get used to the insane so it isn’t too much for you. Be warned.

Check out the gallery above to see everything on offer.

George Carlin will be reborn as a stand-up hologram


The greatest honor the 21st century can bestow upon a dead artist is to have their life’s work reduced to commodity entertainment for nostalgia fiends. That’s why so many singers have been brought back as Pepper’s Ghost-style holograms in the hope of squeezing a few more dollars from their memory. George Carlin is the latest to become zombie entertainment, and will become a permanent fixture at the forthcoming National Museum of Comedy in New York State. In an interview with the Hollywood Reporter, chief curator Kliph Nesteroff reveals that a Carlin hologram will be a “gimmick to bring people to Jamestown.”

The idea is to create a museum that will become for comedy what Cooperstown is for baseball, bringing fans and newbies together. While the main halls will be dedicated to family-friendly humor, the basement of the facility will be dedicated to no holds barred, adult comedy. It’s here that the Carlin hologram will perform “like old times” in a “fake comedy club in one corner.” Nesteroff also adds that there will also be live shows in the venue, where budding circuit comics can see what will happen to their legacy should they be successful enough in life.

Computex’s most excessive PC mod is a cotton candy machine

Asia’s biggest tech show regularly delivers on the PC case mods. If they’re not labors of love courtesy of international case-modders, then it’s a company producing the case mods itself. MSI possibly went too far commissioning this blood sugar-baiting monstrosity. PC modder Mike Petereyns was responsible for the MSI “Cotton Candy,” made to coincide with the company’s 30th anniversary, pairing the state fair diabetes trap with the PC producers’ own GFX (GTX780Ti), camouflage motherboard and white liquid cooling system. Oh and someone was making cotton candy for everyone. Which always helps draw a crowd. Elsewhere,there was a vibranium-tinged Marvel tribute. Have a look at that in the gallery below. 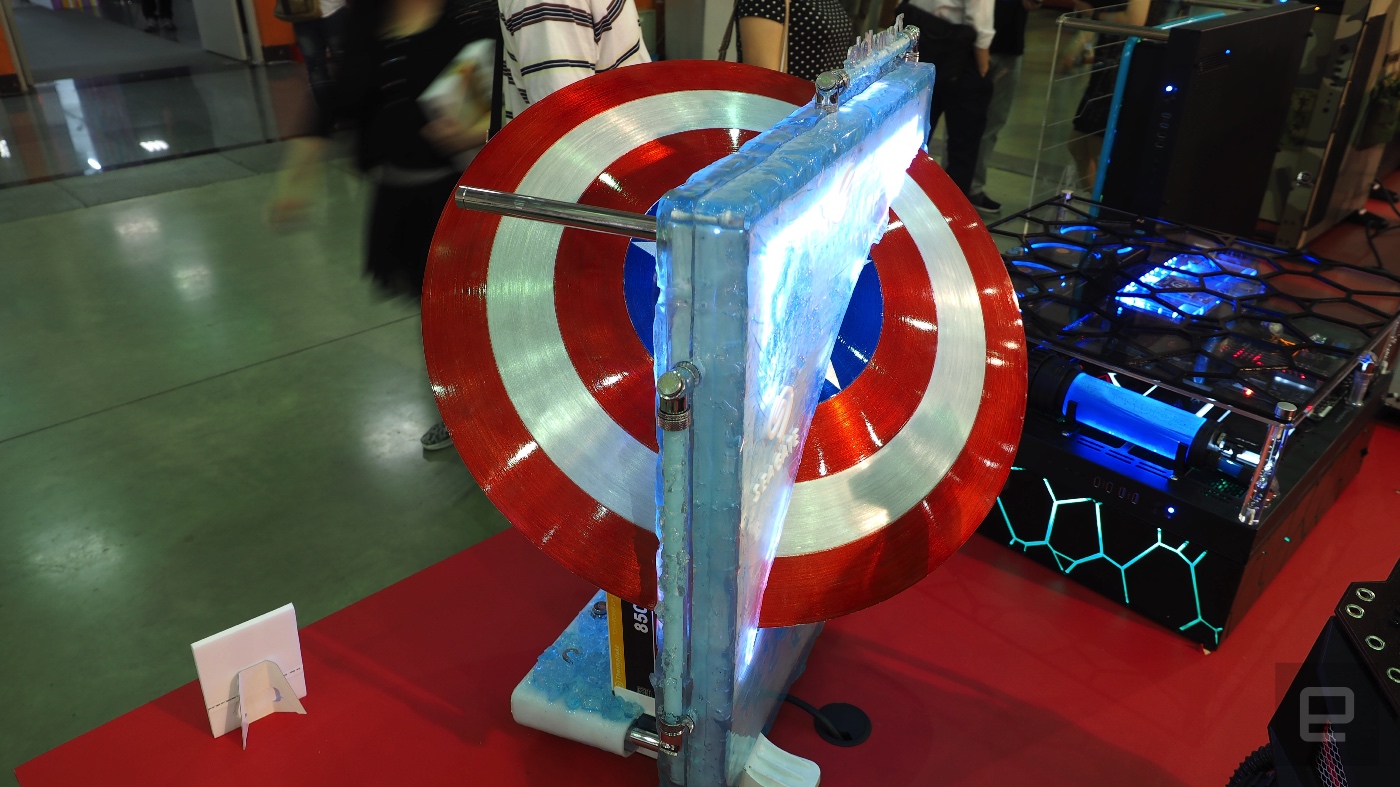 OnePlus is ditching its invite system once and for all


The worst part about OnePlus phones? Trying to buy them. All three of the company’s phones have been sold, at least initially, using an often frustrating invite system. Fans could obtain one by completing various competitions, responding to social media posts or by cajoling their friends who had already bought a OnePlus phone. But no more. With the OnePlus 3, which will be launching on June 14th, the company is killing the invite system once and for all. Fans with a OnePlus VR headset will get a head start, but then it’s fair game from 3pm ET on the OnePlus website.

OnePlus has always argued that the invite system was necessary to control demand for its phones. Co-founder Carl Pei says it stopped the company from building too many handsets, which could have sat unsold in a warehouse somewhere. Unlike Amazon, which can easily take the loss on some unwanted Fire phones, OnePlus had to be careful with its supply chain. “The invite system allowed us to scale our operations and manage our risks to help us grow more sustainably,” he explains in a forum post.

Two years later, much has changed. OnePlus is no longer a fledgling brand with few fans and zero reputation. It’s delivered three, mostly excellent phones and has built a strong, loyal fanbase that crave new announcements. With the OnePlus 3, the company is finally ready to sell a phone like a conventional OEM. How that will affect its image — and the hype associated with each product release — remains to be seen, however.

Most of the Moon’s water might have come from asteroids


For a while, scientists believed that water inside the Moon largely came from comets. However, they might have to rethink that belief. Researchers looking at Apollo mission lunar samples now suspect that most of the Moon’s water came from asteroids smacking into the celestial body between 4.3 billion and 4.5 billion years ago, when it (and the Earth) was covered in a magma ocean. The key was to look at hydrogen isotopes. While comet water tends to be rich in deuterium, less than 20 percent of the Moon’s water shows signs of it — the isotope ratios were generally closer to that of the Earth, pointing to an asteroid origin.

There’s even a possibility that as much as a quarter of the Moon’s water came from the widely theorized Theia impact with the Earth around 4.5 billion years ago, which would have shared material both directly and through asteroids.

The problem with the asteroid concept, as you might guess, is a relative dearth of information. Scientists have only examined 2 percent of the Apollo samples so far, and they’re all from the near side of the Moon. It’s possible that further studies (especially from the far side) will tell a different story. Thankfully, those missions are coming — the theory may get additional support in the years to come.

Via: The Guardian, Popular Science

Google Play will suggest neglected apps for you to uninstall


When you add an app from Google Play and space on your phone is tight, you’re often stuck wondering which of your darlings programs you should kill delete. According to Android Police, Google Play is going to help your decision-making process by offering up suggestions as to what you no longer need. When you’ve run out of on-board storage, you’ll be given a list of your least-used apps, ranked in order of weight. So, in the example, the store suggests that you wipe Google Translate or Facebook Messenger and free up some much-needed space. It’s not clear if the feature is rolling out to users worldwide or if this is a limited trial, but we’ve asked Google to let us know.

App size is increasing at a time when many mainstream phones are losing their microSD card slots, and that’s causing a headache for plenty of users. Devices from companies as diverse as OnePlus and Samsung have moved away from providing expandable storage, and last year Hugo Barra told Engadget that “SD cards will disappear.” It doesn’t hurt, of course, that manufacturers can charge a premium for built-in storage that it can’t for third-party cards. Then there’s the fact that the threat of an app being nominated for deletion might just inspire developers to start trimming the fat from their products.

Faraday Future is already prepping for its second EV factory


Faraday Future hasn’t even released its first vehicle yet, and it’s already thinking about expansion. Vallejo’s city council has approved the electric car maker’s acquisition of 157 acres of land on Mare Island to establish both its second factory as well as an experience center for test drives and pickups. It’s uncertain just why FF believes it needs the extra manufacturing capacity so soon, but the city isn’t likely to second-guess the move. Vallejo declared bankruptcy back in 2008, and it hasn’t been in the greatest of financial health since — an EV company setting up shop would be a gift. It’s still something of a gamble for the town, but it beats watching helplessly as a rival Bay Area city (Fremont) gets Tesla’s attention.


Miss out on your chance to get a free Gear VR headset by pre-ordering a Galaxy S7? You can rest easy. Samsung is launching a US Father’s Day promo that gives you a gratis Gear VR when you buy one of the company’s higher-end phones from the past year, including most Galaxy S6 and S7 variants (sorry, no S6 Active) and the Galaxy Note 5. The deal also gives you an Oculus bundle with “hit games and experiences.” You’ll have to buy the phone between now and June 19th to qualify, but that’s no big deal if you were already thinking about an upgrade and just needed a nudge to get moving.

Smart headphones put an AI fitness coach in your ear


As a rule, fitness coaching from wearable devices is pretty limited when you’re in mid-exercise. They’ll tell you when you hit your goals, but they don’t really know you and your patterns. That’s where LifeBeam thinks it can help. It’s crowdfunding new earphones, Vi, that combine sensors (tracking aspects like heart rate and elevation) with an app-based artificial intelligence coach. The audio gear provides real-time advice that adapts based on numerous factors, ranging from your running technique to your stress levels. It’ll even do its best to minimize exhaustion and injury.

Vi also promises touch-activated speech recognition to keep your hands free, and its battery is reportedly good enough to last for a whole day’s worth of activity (twice as long as most rivals, if you believe LifeBeam). And yes, they they should sound reasonably good for old-school music: Harman/Kardon is helping to produce a “high-fidelity” sound.

Like the idea? LifeBeam is asking for a $199 pledge to get Vi for yourself when it ships sometime in the fall. Otherwise, you’re looking at $249. That’s not trivial by any means, but it’s not much more expensive than other, mostly music-oriented in-ears. If you get most of your listening in during your morning run, it’s likely worth taking a look.

The German city of Augsburg has already tried putting traffic lights in the ground to keep cellphone-obsessed pedestrians from walking on to train tracks, but the Australian state of New South Wales wants to take things one step further. It tells Mashable that it’s going to install ground-based traffic lights at key crosswalks in Sydney (likely in its central business district) as part of a trial starting in December. The aim, unsurprisingly, is to prevent an unpleasant encounter with a car while you’re busy texting your friends.

There’s no mention of how quickly these lights would expand if the trial goes forward, but it’s easy to see them popping up at many busy intersections if they take off. After all, we live in a world where phone fans sometimes get their own sidewalk lanes — lights are just the next logical step.