Innit’s connected kitchen made me some delicious ribs

We’ve heard tell of connected kitchens since the days of the 1969 Honeywell Kitchen Computer, but unfortunately we’re not quite living in the age of the Jetsons just yet. Still, recent smart home innovations such as WiFi-connected ovens and fridges with integrated cameras are helping us make that dream a reality. The missing piece: how to make all those appliances talk to each other. Innit is a startup that aims to tackle exactly that problem. We took a tour of their test kitchen last week to see how the tech works. And, you know, let it cook us a rack of ribs.

Innit envisions itself as the brand behind the brands that make smart appliances for your kitchen. “We’ll be the ingredient brand,” says CEO Kevin Brown, with other companies adding its technology into their gear. That means, for instance, that you could see Whirlpool ovens and Samsung fridges, all connected with Innit’s smart cooking tech.

In other words, then, the company wants to be the platform that helps you throughout the entire cooking process — starting from the food you have in your fridge, helping you to prepare it and then finally cooking it in a way that delivers perfect results every time. That’s a tall order, especially considering all the variables involved, including the size and shape of different foods and the fact that not everyone knows how to cook. But thanks to some machine learning smarts and a variety of high-tech sensors, Innit believes its system is up to the task.

It all starts with food storage. Using cameras and sensors, Innit is able to show you exactly what you have in your fridge, with the help of a companion app. From there, you can select specific items on the fridge shelves to get more information about them. In a demo, Brown tapped on a picture of a carton of milk, and the app immediately called up its nutritional value as well as its expiration date. Basically, it’s facial recognition, but for food.

Alongside that information you’ll also find a list of related recipes, so you can start planning your dinner while you’re in the office. Need some carrots? Running low on chicken stock? Innit would be smart enough to let you know what’s missing so you can pick them up on your way home. It can even figure out what leftovers you have in the fridge, to see if you can add them to whatever recipe you’re concocting. 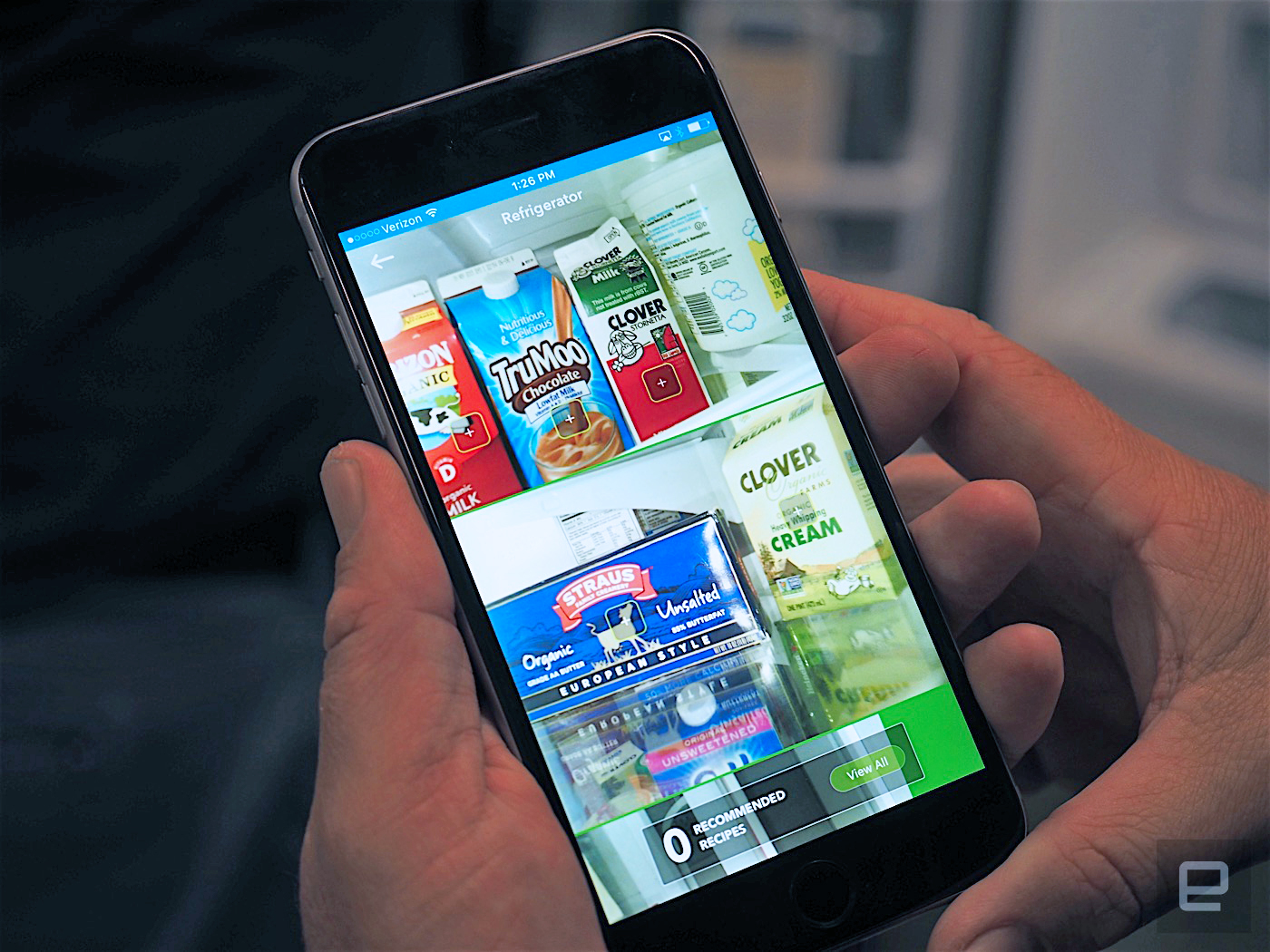 From there, it’s on to food prep. Innit’s test kitchen has an area set up where cameras are able to instantly recognize the food you have on a cutting board, thus bringing up any relevant recipes. We placed carrots on the board, for instance, and it immediately gave us all the recipes it knows that contain carrots. Then we added bell peppers, and it narrowed down the search results to only include recipes that have both carrots and peppers. You can also narrow down recipes by category — say, if you want just poultry or meat dishes. Aside from the cameras, Innit also positioned a large touchscreen display above the counter. Once you find the recipe you like, you can tap it to see step-by-step directions on how to make it. If you’re confused about a particular step — how to truss a chicken, for example — Innit even provides handy video tutorials from sources such as The New York Times.

Because Innit wants to connect every single appliance in your home, you can even start cooking right as you’re looking at the recipe. So if it instructs you to preheat the oven to 350 degrees Fahrenheit, you can simply select the appropriate button and it’ll send that instruction to your WiFi-enabled oven via the connected cloud. And when you do put the prepped chicken into the oven, it’ll know exactly how long to cook it for. This is especially true if the oven is equipped with sensors that can detect just how large a chicken is, for example, and is able to calibrate the thermodynamics so that the white meat is done right at the same time as the dark meat.

The company’s test kitchen did have several such smart ovens, but they’re only prototypes. “We just invented this hardware to train our cloud and develop techniques,” says Brown. “We don’t actually want to bend sheet metal.” The idea here is that Innit would bring these ideas and concepts to a manufacturer like Samsung or GE, and they’d be able to incorporate those sensors into their own line of connected appliances. In other words, the smart ovens in the lab won’t actually be available for sale. 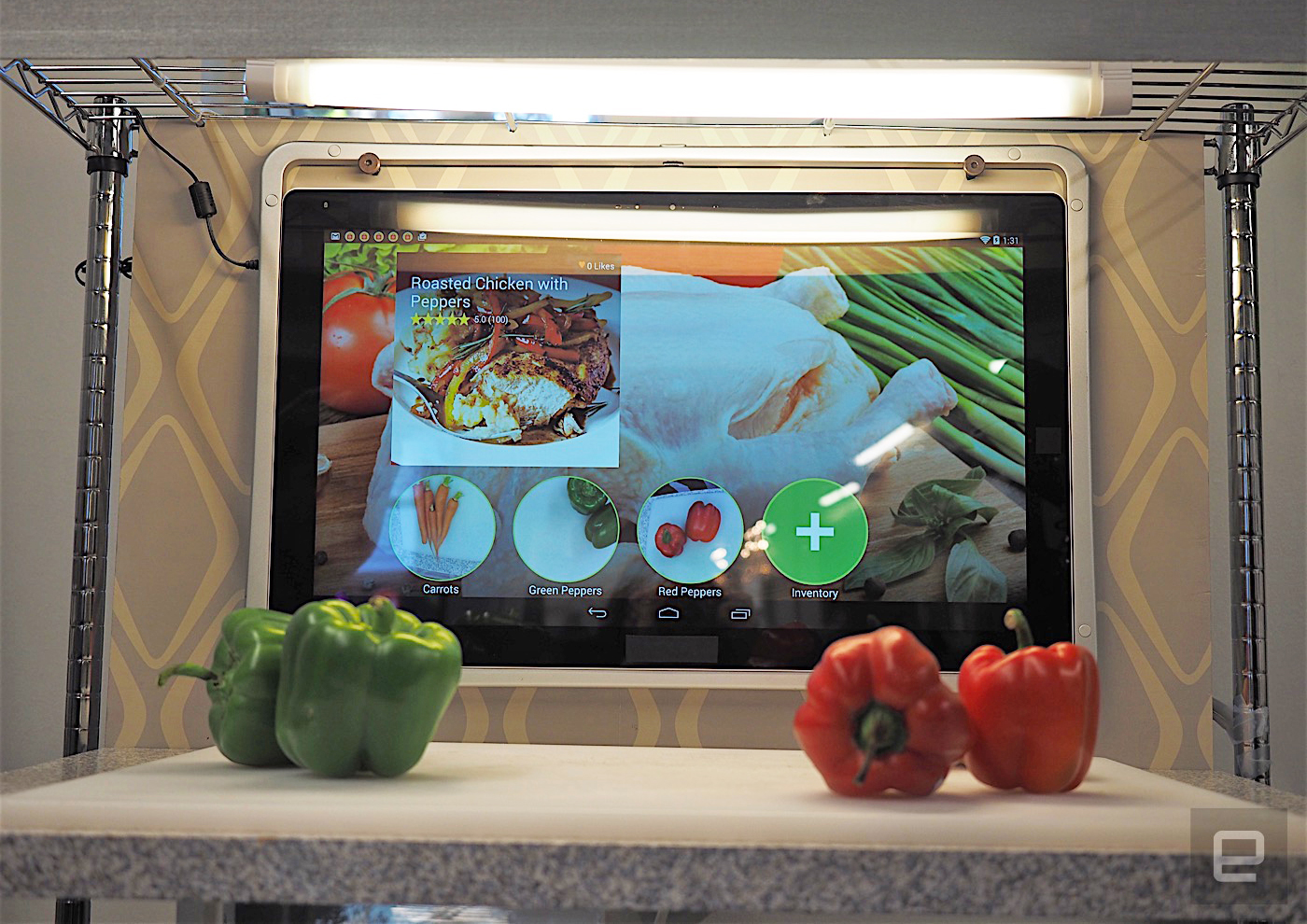 We tried our hand at “cooking” one of these smart recipes, which looked like a basic rack of ribs. The rack was dressed in oil, salt and pepper, per the instructions. Then we placed it in one of the aforementioned smart ovens, and simply pressed a button. I didn’t have to set the temperature or a timer at all. It went into cook mode immediately, only prompting us to flip the ribs over after about 15 minutes. Forty or so minutes later, the ribs were done. They were delicious.

Of course, the technology is still in a prototype stage and there’s no telling how well it would work in a real-life kitchen. Right now, the only recipes Innit has in its library are sourced from Bon Appetit, Good Housekeeping and Epicurious. Those are great, but as someone who likes to experiment with recipes from a dozen different sources, I find the list limiting. It’s also definitely targeted at those who are willing to invest in the latest connected appliances; your decade-old stove probably won’t be Innit compatible. There’s also not yet a way for you to incorporate your own smart gadgets into the Innit system. So if you already have a WiFi-connected sous vide cooker, for example, you’re on your own.

Still, it’s early days yet. Innit is still collecting data and gathering information to train its platform and has been busy pitching its idea to the big kitchen manufacturers. It isn’t ready to announce any partners right now, but Innit tells us that consumer trials are set to begin later this year, with the first compatible products to become available sometime in 2017.

If this all sounds intriguing to you and you happen to live in New York City, you can actually check out a demonstration of the technology for yourself. Innit will be doing a demo of its connected kitchen later today at a new location of Pirch, the luxury home retailer, in Manhattan’s SoHo district.