Yesterday during Google’s annual I/O keynote, the company made a point of mentioning that Electronic Arts and Ubisoft — two of the biggest third-party game studios — were working on projects for Google’s new virtual reality platform, Daydream. Now the company is ready to announce another: Epic Games. The latest version of the company’s powerful and ubiquitous game-design toolset, Unreal Engine 4, is coming to Google’s next-gen mobile VR system. For developers it ensures easy porting of existing apps to Daydream with little extra work required. For consumers, it means higher-quality mobile VR experiences, and maybe more of them too.

The plugin is a joint effort between Epic, Google and Hardsuit Labs, according to Epic’s VR and augmented reality technical director Nick Whiting. To show off the progress the Unreal team has made so far, Epic has created an app currently dubbed Dungeon that takes full advantage of what is perhaps Daydream’s most important feature: its motion-sensing, Wiimote-like controller.

“We’re making Dungeon a tech demo like we did with Showdown and Bullet Train to kind of feel out the platform, figure out how far we can push the visuals and kind of experiment using the motion controller,” Whiting says. At its most basic level, Dungeon is a fantasy role-playing game where you’re casting fireballs at spiders with a wand, drinking various potions and eating apples bite-by-bite to regain health. As the working title suggests, this all takes place in the bowels of a medieval castle. 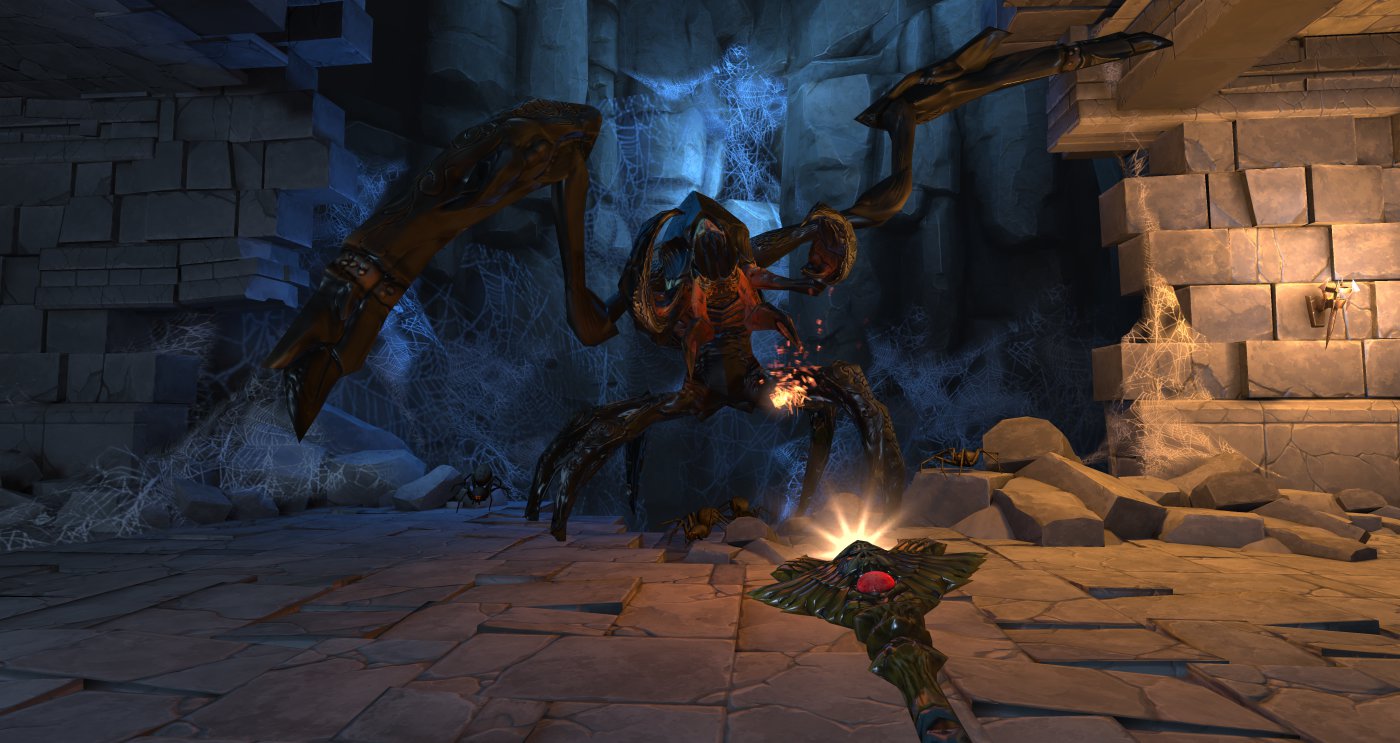 Whiting adds that Daydream’s input device is the first three-degrees-of-freedom (up and down, left and right, forward and backward) controller Epic has encountered, so Dungeon acts as a way to establish a set of standards for the nascent platform — much like Showdown did for head tracking on early Oculus Rift prototypes, and Bullet Train did for the Oculus Touch controllers.

“We’re figuring out the best practices and ways to fool your brain into thinking you’ve got a full arm [in virtual reality] even though it’s not positionally tracking,” he says. The relatively simple remote is a stark contrast to something like the the Oculus Touch controllers or HTC Vive’s input devices, which offer full 3D input recognition and more buttons.

It has to be simpler, though, considering those other controllers work with hardware that’s considerably more powerful than the smartphone in your pocket. But, thanks to the previous work Epic has put into Unreal Engine 4 with other motion controllers, things are progressing quickly. In fact, Dungeon is the result of just one developer, environmental artist Shane Caudle, working on the project with pre-made assets pulled from the Unreal online marketplace. Based on the video embedded above, it already looks impressive.

What’s more, starting today, applications developed in Unreal Engine 4 will join the some 50 million mobile VR apps currently on Google Cardboard. “If you enable this plugin and deploy your app, and it’s not [running] on a Daydream qualified device,” Whiting says, “it’ll fall back to basically Cardboard-level support.”

That’s pretty important considering that the number of Cardboard-ready devices is still going to outnumber Daydream-certified ones for quite some time. “A lot of people developed applications [in Unreal Engine 4] and wanted to deploy on Cardboard,” Whiting says. “This opens up the door to that.”

The free Unreal Engine 4 plugin is available to download now from GitHub.