It may seem ludicrous to make a new instant film camera in a time where even a standalone digital camera for many is no longer a necessity. But that’s exactly what the Impossible Project has done with the I-1.

For a bit a background, in 2008, the last Polaroid film factory closed and the Impossible Project stepped in and bought its machines. It had to reengineer the instant film from scratch, but it is now the only manufacturer of original format instant films for Polaroid cameras.

But those cameras, for however good they are, are stuck in the past. The I-1 camera, on the other hand, has the simplicity of those old cameras while also taking advantage of the smartphone in your pocket.

“It’s generally a great point-and-shoot camera, but on top of that we developed an app,” said Impossible Project CEO Oskar Smolokowsi. “It’s a fully analog camera, and the app is something that helps you control it and get more features out of it.”

The camera has built-in Bluetooth that’s used to connect to an iPhone. With the iOS app, you can remotely trigger the camera — a nice option if you want to be in your shots or simply don’t want to shake the camera by pressing the shutter release. But what really expands the camera’s usability is access to a manual mode. With it shutter speeds can be set from 1/250 of a second to 30 seconds and the aperture range covers f8 to f60.

There are also creative tools in the app for doing things like light painting and multiple exposures. Smolokowski said more of these tools are being developed in house and, depending on interest, they’re considering an open software development kit. 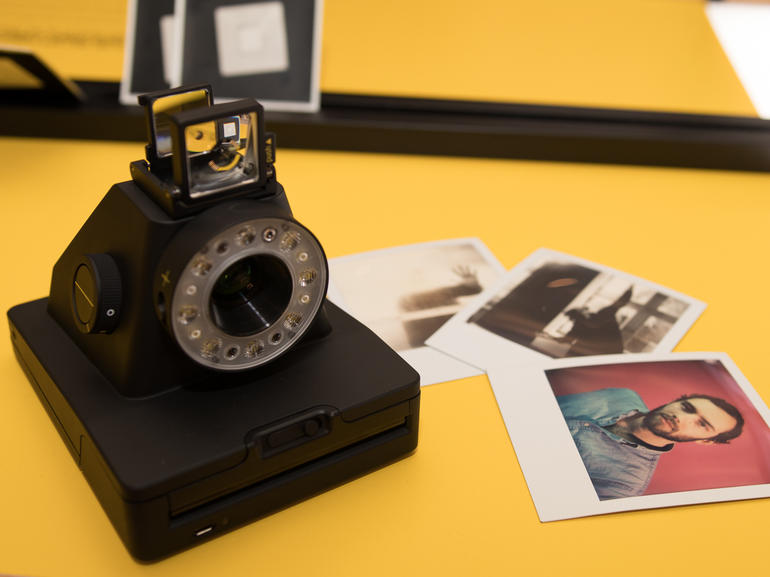 The I-1 has a very simple, clean design that’s familiar, but still new.

On top is a simple pop-up viewfinder. Magnets securely hold it in place, but since it’s removable, the company plans to offer other accessories that can quickly be attached such as a waist-level viewfinder.

With a maximum aperture of f8 you’re going to need a lot of light for your shots, so there’s a ring flash around the lens to help brighten your subjects. Well, that, and letting you know how many shots are left in your pack of film. The camera can be used with Impossible I-type and 600 type film cartridges. Each pack has eight shots and costs approximately $20, £17 and AU$29 or more each (though there is a discount if you buy multiple packs). That’s $2.50 a picture.

The I-1 instant camera itself retails for $299 (AU$390, £229) and is available exclusively at the MoMA Design Store, Colette, Paul Smith and Selfridges in the UK, as well as on http://www.impossible-project.com.

It would be easy to write this off as a novelty for hipsters and, even for instant cameras, the I-1 and its film is a pricey one to own and operate. However, instant cameras are popular. If you look at Amazon.com’s best sellers in its camera category, half of the top 20 products are instant cameras or the film for them. The fact is, just like shooting and sharing with our smartphones, instant film cameras let us capture a moment and still share it instantly. So maybe making the I-1 isn’t all that ludicrous after all?