OneDrive to rule them all? Sorry, I can’t resist a good “Lord of the Rings” joke (or, in this case, a desperately overplayed one). Today, we’re going to look at how you can rule OneDrive, the cloud storage service that’s deeply integrated into Windows but also accessible via Android and iOS.

That rule comes in the form of If This Then That, aka IFTTT, the online service that performs actions based on other actions. So, for example, if you receive an email with an attachment, then automatically save that attachment to OneDrive.

These are called recipes, and although you can easily create your own, there are literally hundreds of IFTTT recipes already devoted to improving the OneDrive experience. Below are four I think you’ll really like. (Note: Some recipes continue to refer to OneDrive by its original name: SkyDrive. That’s not a problem; ultimately everything works with OneDrive.)

Save new Gmail attachments to OneDrive 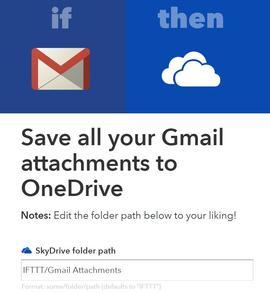 As explained in the example above, this recipe scans your Gmail inbox for any messages that have attachments, then saves those attachments to the OneDrive folder of your choice.

Why would you want to do that? Simple: It’ll save you a ton of time sifting through Gmail and allow for faster, easier attachment-sharing.

Once you’ve set up IFTTT connectors for both your Gmail and OneDrive accounts, you can add the recipe, optionally choosing your preferred OneDrive folder for those saved attachments. Just take note that the recipe works for any new attachments received from that moment forward; it doesn’t work on past email. 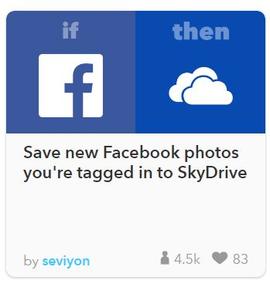 You know the drill: a friend or family members tags you in a photo that appears on Facebook. You like the photo, so now you have to jump through one or more hoops to save it.

With this recipe, anytime anyone tags a photo of you on Facebook, that photo automatically gets saved to OneDrive. (This is one of those recipes that calls it SkyDrive, but rest assured the end result is correct.)

Send yourself a voicemail message

Did you know IFTTT has a phone number? It does, and you can leverage it for all kinds of things.

For example, suppose you’re tooling down the road when suddenly you have a brilliant idea. You can’t write it down while driving, of course, but you can call IFTTT. With this recipe (dubbed “Talk to the cloud”), any voicemail message you leave at that number will be delivered to your OneDrive account as an MP3 file.

Bridge the gap between Dropbox and OneDrive 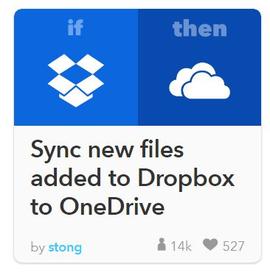 Many OneDrive users are also Dropbox users. If you’ve ever needed to transfer files between one service and the other, you know it can be a huge hassle.

Thankfully, there’s a recipe for that. Whenever you add a new file to a selected Dropbox folder, it will automatically get synced to OneDrive. (When adding the recipe, make sure to click the Advanced Settings option so you can also specify the OneDrive folder where new files should land.)

OK, those are my picks for must-have IFTTT recipes for OneDrive. If you’ve used (or created) others you consider essential, hit the comments and name them!

Read more from News
← How to add a ‘Hey, Siri’-style command to your Mac – CNET
Apple’s $1 Billion Investment in Didi Chuxing Aligned With Electric Vehicle Plans →