The LG G5 marked a dramatic departure from the norm for LG, with their latest flagship offering being the first to feature an all metal build. As significant as the change in build material is, what makes the G5 stand out from the crowd even more is its modular nature, possible courtesy of a removable bottom chin, allowing for other useful add-ons to be attached.

The LG G5 is certainly very different, but are these differences enough to make it a worthy upgrade from its predecessor? We find out, as we take a comprehensive look at the LG G5 vs LG G4!

As mentioned, LG completely changed the formula with the G5, not only when looking at the build quality, but also with regards to the design. The full metal build makes the G5 feel more premium than any of its predecessors, but it has to be mentioned that with the coat of primer and paint, the G5 does unfortunately fall short when compared to its metal brethren. An aspect like design always comes down to individual preference, but many will agree that the G5 isn’t exactly the most attractive phone that LG has produced. Of course, the big story here is the modular capabilities that the device comes with. The bottom chin can be removed by the simple press of a button, and allows you to attach different modules in its place. Some of these modules, which LG calls “Friends,” include the Cam Plus, a camera grip with physical button and controls, and a Bang & Olufsen Hi-fi audio DAC, that provides higher quality audio. The removable chin means that you also have access to the battery, so despite the change in design and build quality, LG still managed to retain staple features like a replaceable battery, which is something that quite a few users will appreciate. On the other hand is the LG G4, and when looking at these two smartphones side by side, its hard to imagination that these are part of the same flagship series, and only a year apart. The G4 is made entirely of plastic, or leather and plastic for those who opt for the leather back cover options. The G4 seems to also be the last LG smartphone to feature the company’s signature curved body and display, which is certainly a shame, as the curve not only allowed for a unique look, but also favorably contributed to the handling experience. The G4 also comes with a replaceable battery, which can be accessed in the more traditional manner of simply removing the back cover. 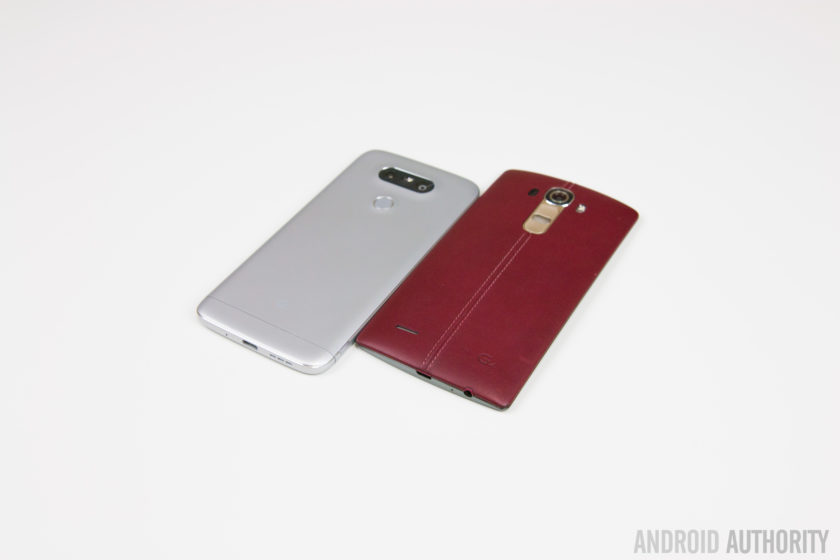 Another big different between these phones can be found in the button layout. The G5 retains the rear-mounted power button from the G4, but the volume rocker has now been moved to a more standard location on the side. The latest LG flagship has a smaller overall footprint compared to its predecessor as, which is understandable, given that it features a slightly smaller display.

As far as one-handed usability is concerned, the G5 does provide the better handling experience, but the G4 isn’t far behind either, courtesy of its curved back, and ultra-thin bezels along the sides of the display up front. 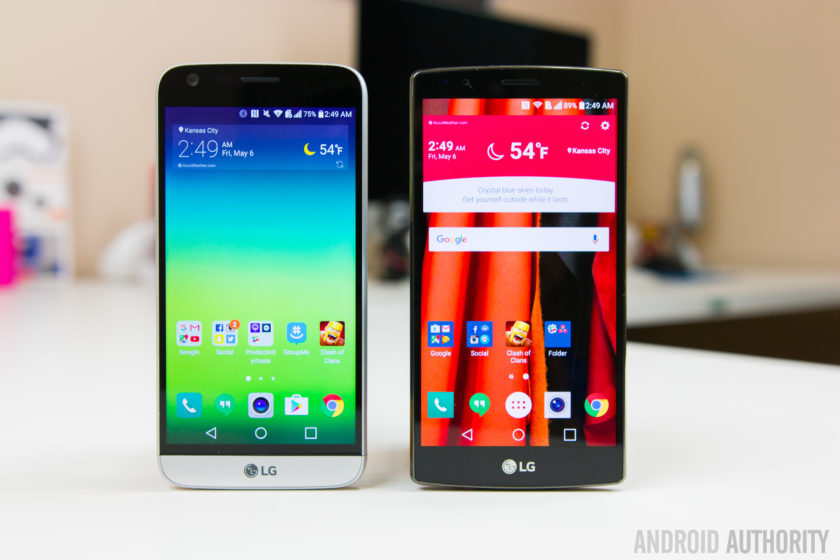 The LG G5 comes with a 5.3-inch IPS LCD display with a Quad HD resolution, while the G4 features a 5.5-inch IPS LCD screen, with the same resolution. Apart from the additional screen real estate that is available with the G4, both these displays are comparable in terms of quality. You get good viewing angles, brightness, and color reproduction with both, but it has to be said that neither can be considered the best display out there.

The display of the G5 does exhibit much cooler tones when compared to the G4, but that is something you will only notice when have the two devices side by side. The other big difference is that the LG G5 comes with an Always On display, that can show you the time, notifications, or a custom message. 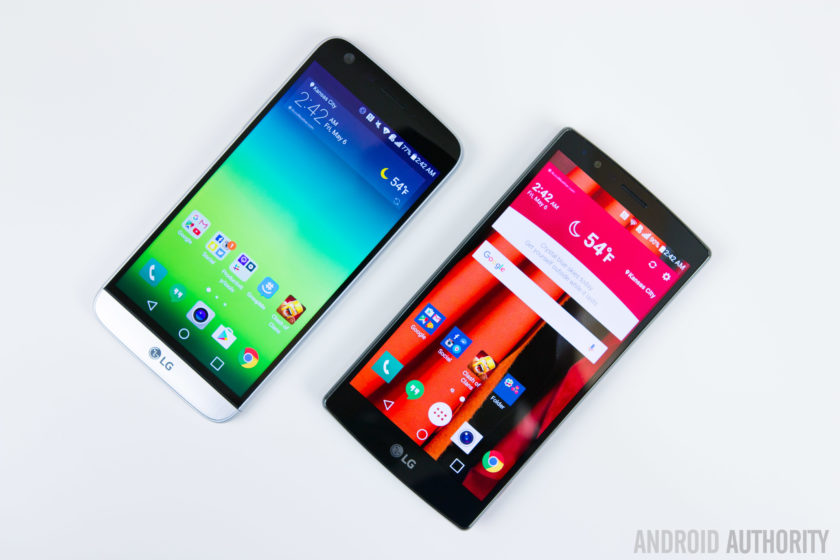 Under the hood, the LG G5 comes with a quad-core Qualcomm Snapdragon 820 processor, clocked at 2.15 GHz, and backed by the Adreno 530 GPU and 4 GB of RAM. This is the latest and greatest that is available, and powers all other current generation flagship smartphones as well, so it’s no surprise that the phone is extremely fast and responsive.

On the other hand, the LG G4 is powered by the older hexa-core Qualcomm Snapdragon 808 processor, clocked at 1.82 GHz, and backed by the Adreno 418 GPU and 3 GB of RAM. While this remains a reliable processing package, and the G4 does still perform very well, it obviously doesn’t hold a candle to the far more powerful G5, and the generally snappier performance that you get with the latter. 32 GB is the only storage option available with both, and both smartphones also come with expandable storage via microSD card, for up to an additional 200 GB. Things remain largely the same in terms of hardware, but the LG G5 does come with a fast and accurate fingerprint scanner that is embedded into the power button on the back. LG has also made the switch the USB Type-C with their latest flagship. 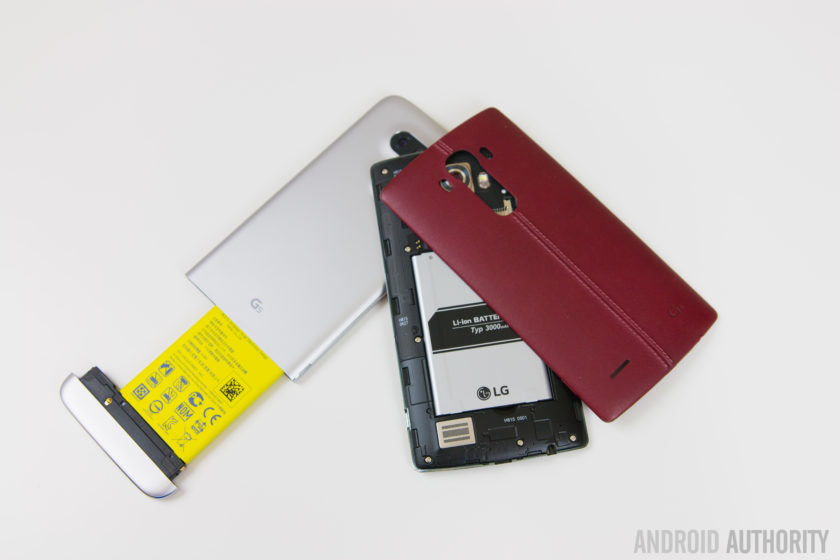 The LG G5 comes with a 2,800 mAh battery, which is slightly smaller than the 3,000 mAh unit found with the G4, but things are about the same when it comes to battery life. Both smartphones can comfortably allow for a full day of use, but you won’t get much more than that from either. Both devices also come with fast charging capabilities, so if you are running low on battery, you can get back to a full charge very quickly. Finally, both batteries are also removable, so if battery life is a concern, you always have the option of carrying around spares. 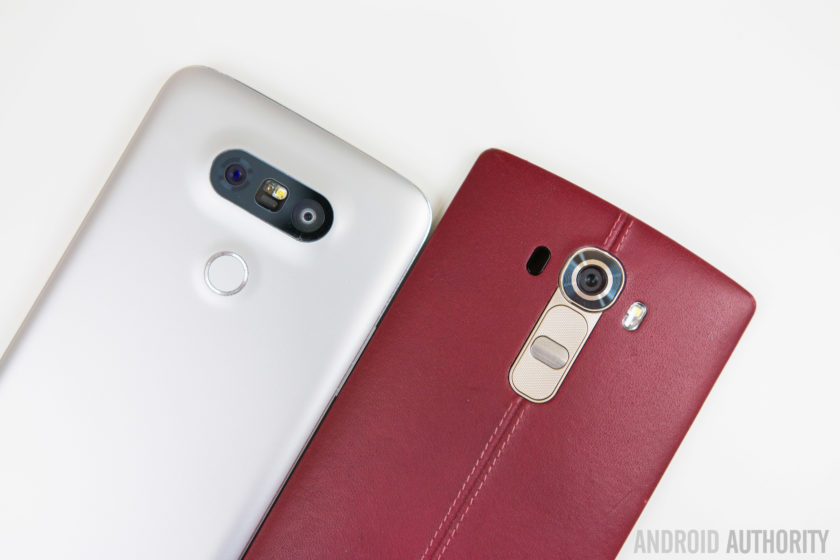 Both the LG G5 and G4 use the same 16 MP primary camera with an f/1.8 aperture and OIS, but with the G5, LG has also tacked on a secondary 8 MP shooter with a wide angle lens, which allows for some incredible looking wide angle shots. This secondary camera is a lot of fun to use, and is by far one of the best features of the LG G5. 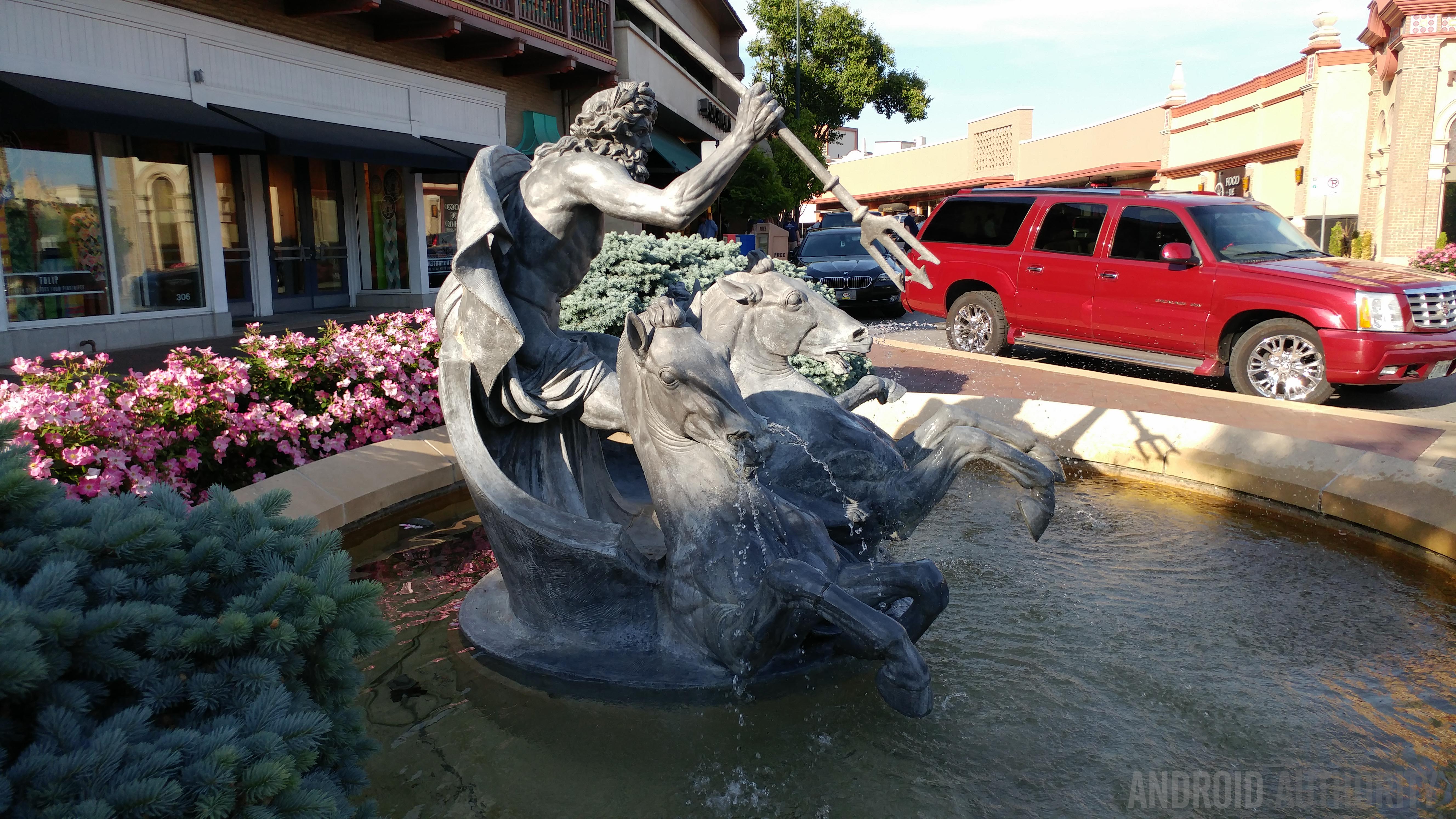 There are some subtle differences when it comes to the camera software, with the G5 coming with a few extra features modes, such as Multiview mode, which lets you use all three cameras at once, or Snap mode, that can be used to record a string of 3 second clips. Other than that, the camera application remains the same, with both featuring simple and auto modes, and if you are looking to dive in a little deeper, there is a robust manual mode with DSLR-like granular control over aspects like white balance, ISO, shutter speed, and more. 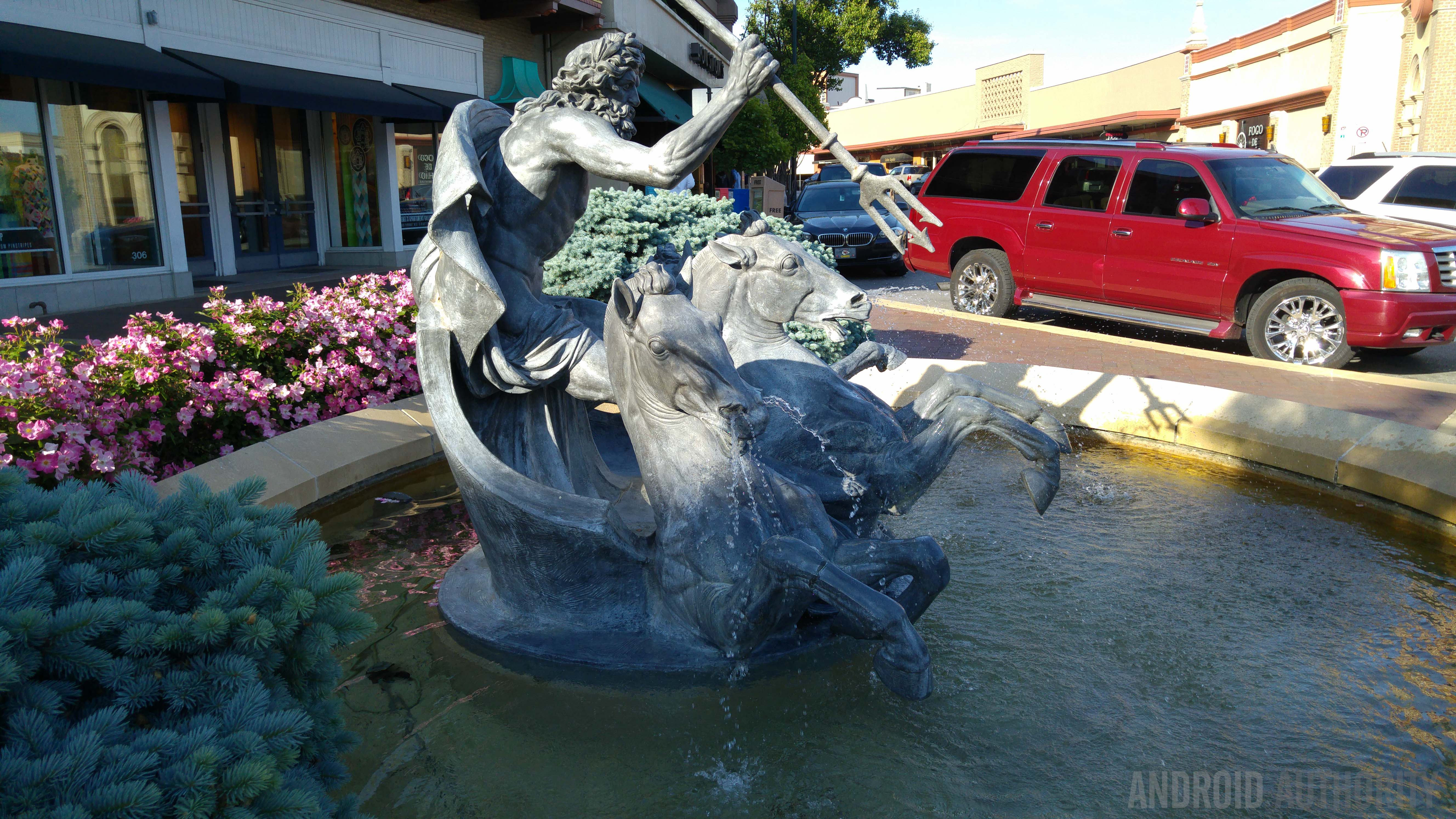 With both phones featuring the same 16 MP primary shooters, the assumption would be that the image quality would also be similar, but that is surprisingly not the case. Both take very sharp photos with a lot of detail, but the post-processing with the cameras is slightly different. The G5 creates images with more contrast and more vibrant colors, resulting in much darker shadows and less detail in these areas. On the other hand, the G4 goes in the opposite direction, with images coming with less contrast and slightly less color, but you do get a brighter shot overall, with more detail in the shadows. The only drawback here is that because of the brighter image, you are also getting overblown highlights. 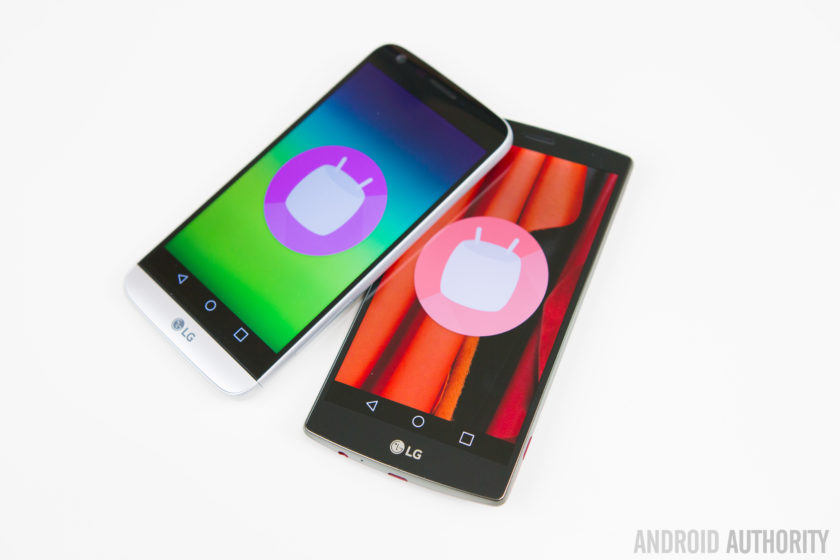 On the software side of things, both the LG G4 and LG G5 are running Android 6.0 Marshmallow but with two completely different versions of LG’s interface. The G4 comes with an older version of G UI which is packed with a ton of features that may or may not be all that useful, and it feels a lot more intrusive, with a lot of these features being activated by default. With the G5, the new LG UX may still not be the best interface out there, but it is a big improvement over previous iterations. It is still very cartoonish, with its brightly colored icons, but the overall aesthetics look a lot cleaner and more streamlined. 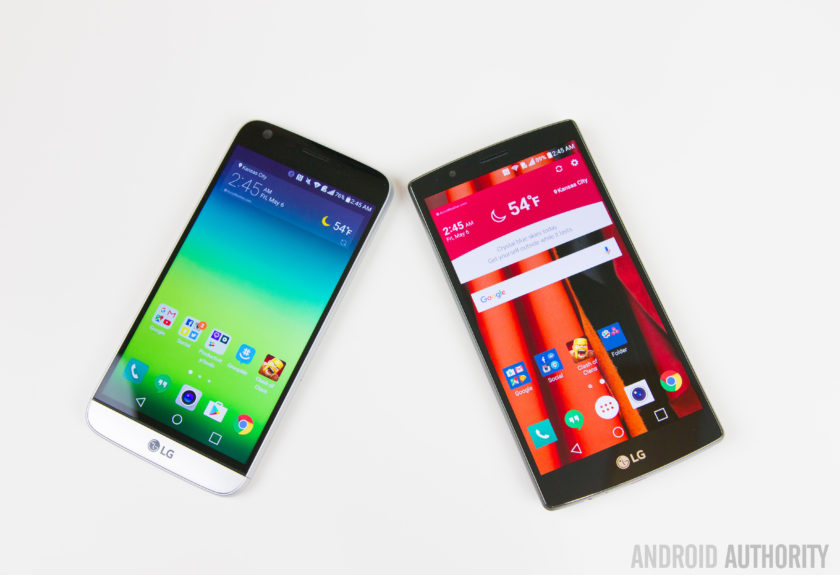 With the G5, LG also got rid of some features like Dual Window, and have hidden features like the QSlide apps and Smart Bulletin, but are still available for those who want to use them. The biggest change that has been made is the removal of the app drawer, which can certainly take some getting used to, and leaves users dependent on folders to keep things organized. Of course, you always have the option to download a third-party launcher from the Google Play Store to bring back the app drawer, and LG has an official option available as well, downloadable from the LG SmartWorld app. 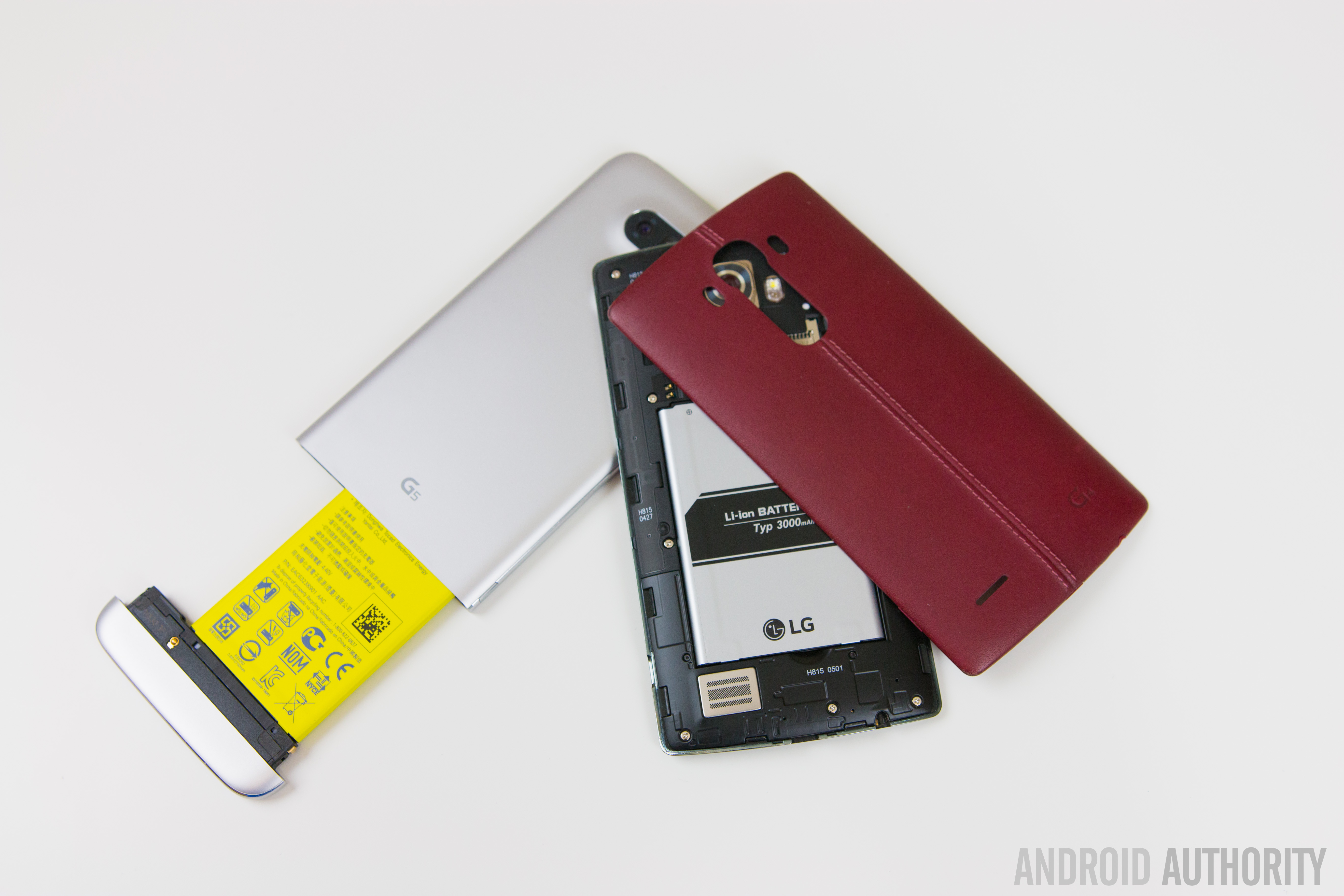 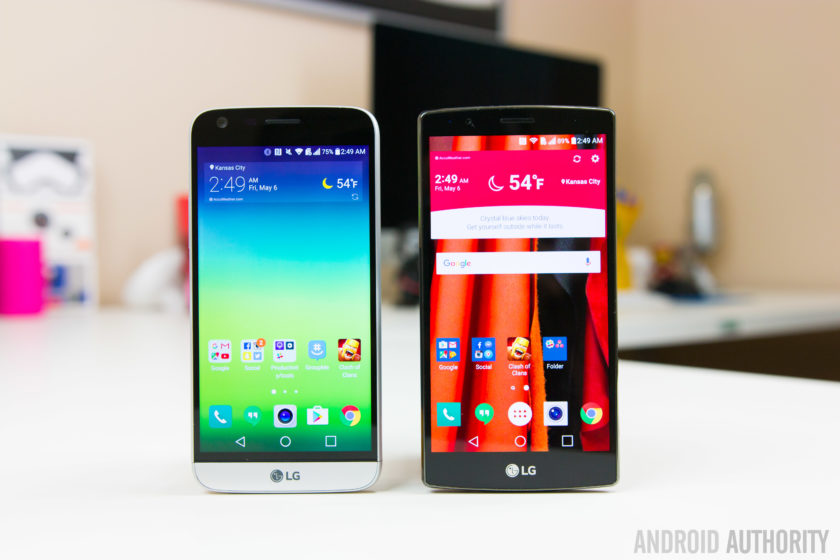 So, there you have it for this closer look at the LG G5 vs LG G4! The big question here is whether the LG G5 brings enough to the table to be considered a worthy upgrade from its predecessor, and the answer really depends on how much you want all the new features that the G5 brings into the picture, such as the modular design, the dual rear cameras, and the fingerprint sensor.

The LG G4 does everything we expect from a smartphone really well, allowing for smooth performance, a great viewing experience, fantastic camera, and good battery life. With the G5, LG has certainly made improvements to all of those aspects, and something like its modular capabilities can prove to be quite compelling as well. All said and done, the LG G5 is definitely worth the upgrade, but if you do decide to stick with the G4, you can rest assured that you still have a more than reliable daily driver.