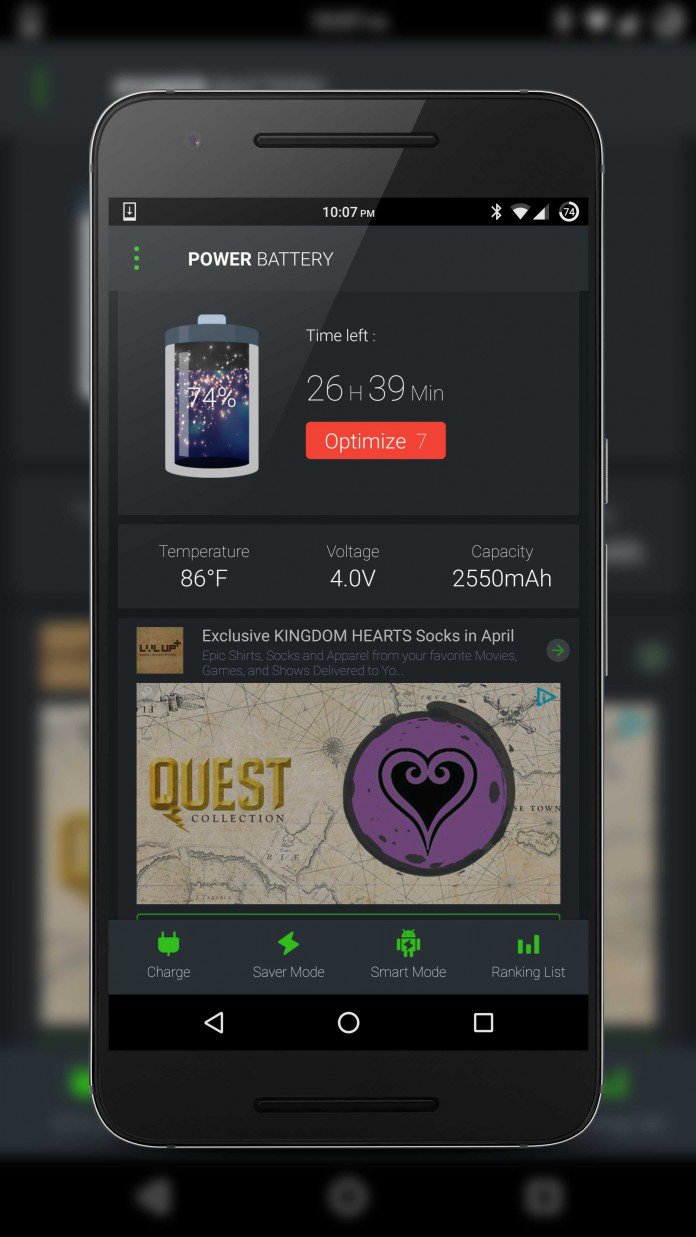 Android’s battery life has improved by leaps and bounds over the past few iterations. Features like Doze and Android RunTime Compiler have reduced the battery draw of everyone’s favorite mobile OS significantly, and a combination of increased battery size and more efficient CPUs mean we’re getting some help from hardware, too. That said, though, you’ll still be lucky to get a full day’s use out of most modern flagships. Power Battery – Battery Saver aims to help make the most out of your mAhs by offering a suite of tools to reduce the drain on your battery.

Power Battery was a mixed bag in my experience; on the one hand, it is excellent at detecting apps that are draining battery quickly. On the other, those apps tend to be onscreen foreground apps that are (rather obviously) draining the battery. There are a number of helpful features baked into Power Battery, but for every beneficial one there is a potentially frustrating one to match.

Power Battery has some really great battery and use statistics built in – from real-time current charge left to actual mAh usage statistics, the guys at LIONMOBI love their numbers. The app features context-sensitive notifications that show up when certain conditions are met; for example, when my phone dropped from 50% to 40% in an amount of time that was inconsistent with the normal usage, I received a notification showing me the icons of the culprit apps.

In addition, Power Battery also provides a lockscreen that replaces your default one when your battery reaches a specific threshold. I found this to be a bit frustrating in practice when used in conjunction with my fingerprint security, but otherwise found it to be a solidly designed lockscreen meant to help make your battery last.

As for actually saving battery, I felt like Power Battery did its job admirably for not needing root-privileges. It reliably identified power-draining apps and extended my battery life when it was low, though I have to say that I did get more battery life with Amplify.

I’m going to be frank; Power Battery has too many ads. There is at least one prominent ad on every page within the app – sometimes two or three. With so many ads, it can come across as a money-making application rather than an app that’s purpose is to provide a service. I understand that app developers need to make a living as well, but when I open an app and I see more ad than app, I feel that’s a bit much.

My second beef is with the notification and lockscreen features. Neither of these features is customizable and you can’t turn either of them off – in fact, you don’t even know they exist until they’re on your screen, which can make for some rather alarming confusion at first. The lockscreen conflicts mightily with my fingerprint security, resulting in having to unlock my phone twice to get it open.

While my battery life with Power Battery was definitely longer than on Stock Android Marshmallow, it was not dramatically improved, and it was not as effective as other, more robust apps.

Power Battery does what it advertises, but unfortunately also advertises when it should be doing what it does. This is an ad-heavy, free app that will extend your battery life on Stock Android, assuming you don’t have access to a stronger battery saver.