‘Cognitive Cooking with Chef Watson’ is a collaboration between IBM and the Institute of Culinary Education in New York City. As part of an ongoing series, we’ll be preparing one recipe from the book until we’ve made all of them. Wish us luck.

When given the opportunity to prepare a recipe from Cooking With Watson, I picked Baltic apple pie because hey, it’s apple pie. You mix up some filling, dump it into a tin lined with dough, bake for 40 minutes and voila, you have a delicious dessert that you can even put ice cream on. Oh, the Baltic apple pie has pork in it? OK, forget the ice cream. But, a savory meat pie can’t be that hard, right?

This is where I’m supposed to say “wrong,” but to be fair, the Baltic apple pie isn’t really that hard. But the recipe also includes two sauces and a garnish, requiring a total of 23 ingredients and hours to make. It wasn’t even an entire meal. My colleague Terrence O’Brien has noted how Cooking With Watson isn’t really intended for home cooks, and with this project, I learned that the hard way.

The ingredients came from a variety of supermarkets, but it’s not necessary to shop around so extensively; most of the ingredients for the Baltic apple pie and its accoutrements are common items such as milk, eggs and garlic. It does require three different sugars as well as two salts: fine sea and smoked. Smoked salt is one of the two hard-to-get ingredients on the list, along with agar. Agar can usually be bought at Asian grocers, but I went to Whole Foods only because there’s one close to the Engadget office. I wouldn’t recommend that due to cost: If you can’t find them at your local market, buy the ingredients online instead. 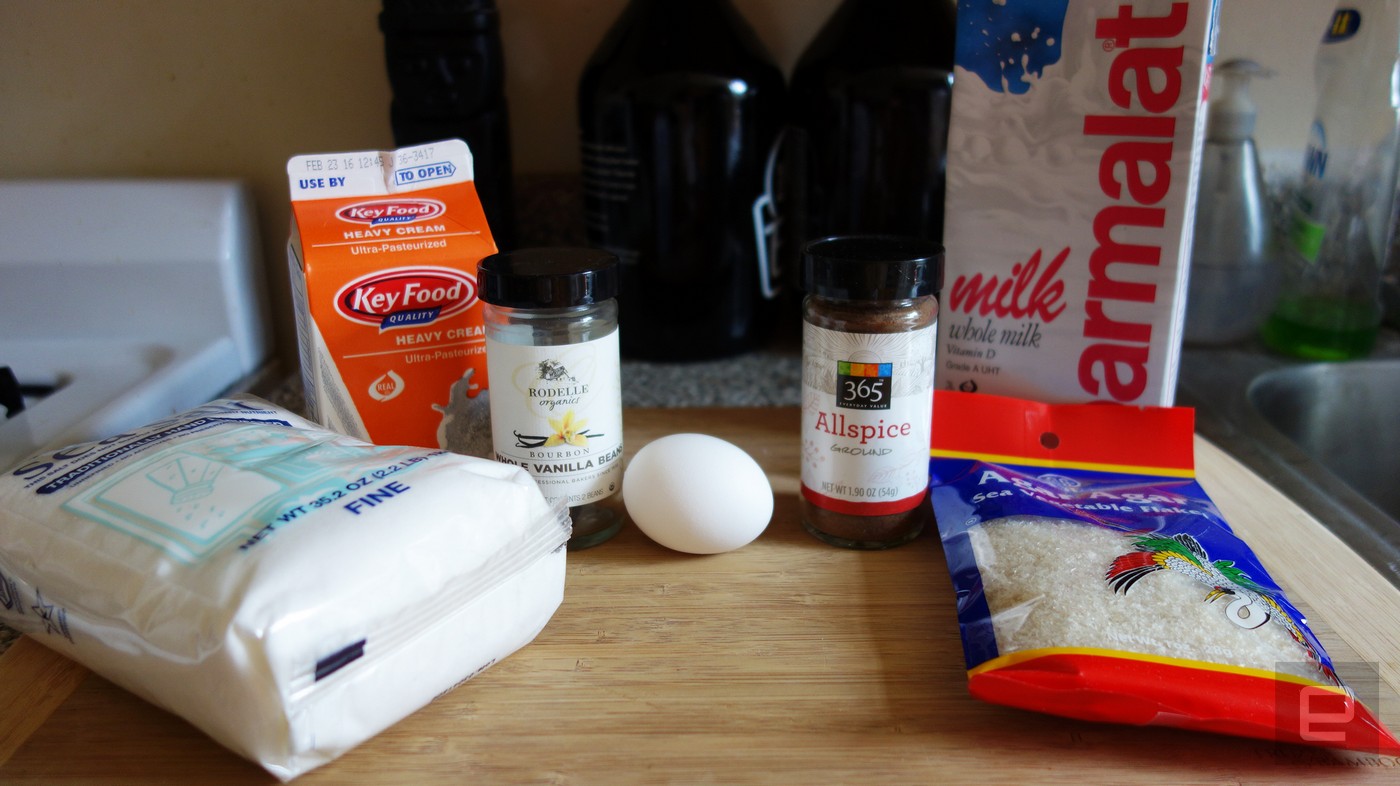 The one thing I had trouble locating wasn’t an ingredient, but a kitchen tool: Tart rings. Any time I was in a store that offered household goods I looked for them to no avail. I could have gone to a kitchen supply store or ordered online, but ultimately decided not to given I had little use for them after this recipe.

I set aside an afternoon to get this done, thinking that a savory pork and apple pie would be lovely at dinner. First item on the list was the “mayo,” written in quotes because this mayo lacks oil, vinegar and lemon juice. Instead, it utilizes eggs, milk and cream with agar to set, and is flavored with allspice and vanilla bean. I have learned that scraping out a vanilla bean is not fun and a bit anxiety-inducing: Given that they’re so expensive, you want to make sure you use every last bit, and the process can be messy.

Everything was fine from there until I popped the mixture into the blender. It never thickened into a gel. The flavor was correct, at least. I left the “mayo” to chill and went to work on the apricot and blueberry preserves. It also failed to gel properly, but still made a fine tart compote. 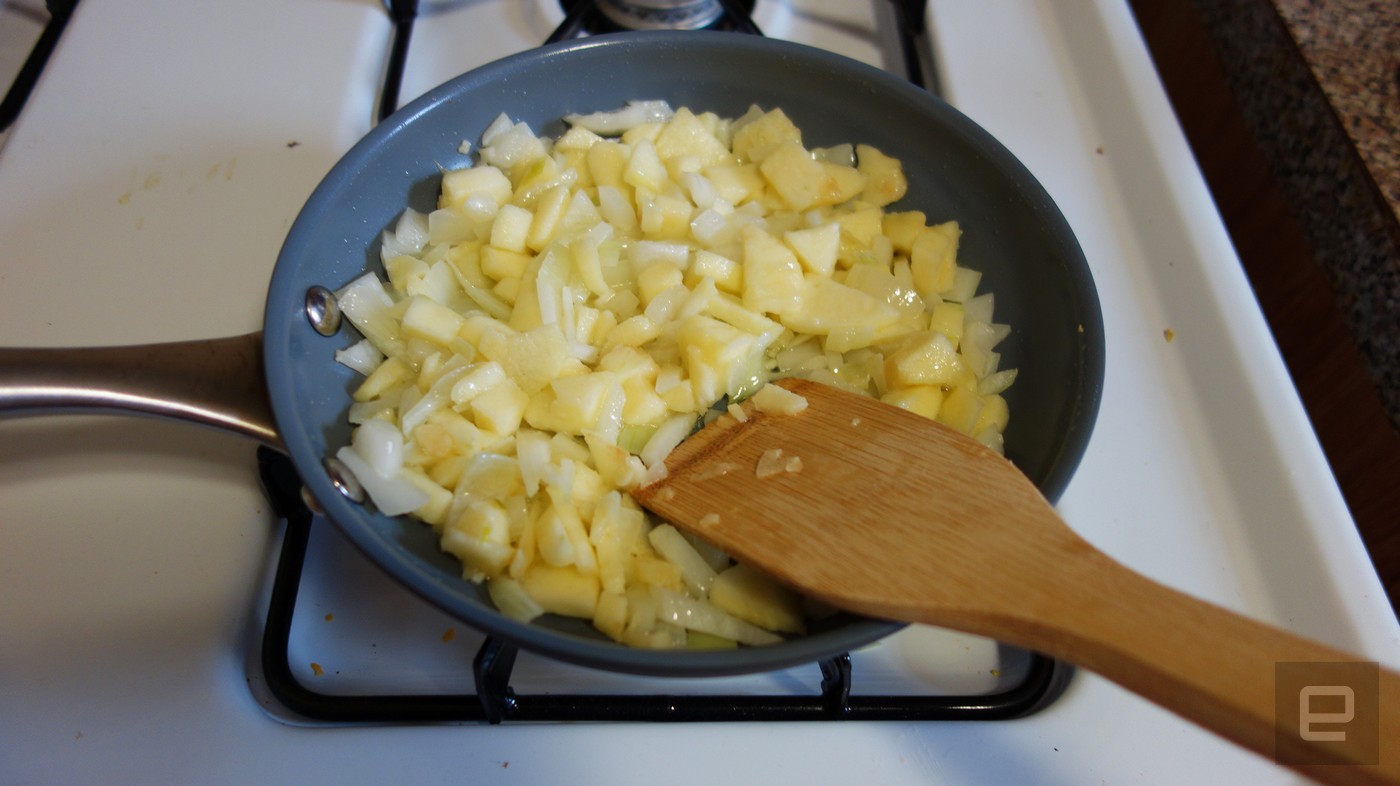 At this point I decided to tackle the apple pie itself. The first step was to dice and brine the pork, but didn’t specify which salt to use. I opted to use the fine sea salt, sprinkling in just a handful of the smoked version for flavor. I prepared the rest of the filling, throwing diced apples and onions along with chopped garlic into a pan to sauté with butter. “That smells divine,” my roommate called out from the other room. The instructions then say to sprinkle brown sugar and salt on the filling… but again failed to specify which salt. I used the smoked one.

Next up was the puff pastry sheets. The recipe wanted me to cut them into 6- and 4-inch circles. However, when I unfolded the puff pastry sheet it quickly became apparent it wasn’t enough for four full-size tarts. I checked to see if I had screwed up: The recipe says one to two pounds of puff pastry dough, which could be one or two boxes, and I had only purchased one box with roughly one pound.

Undeterred, I opted to cut the circles smaller. Remember how I didn’t buy tart rings? I decided to use my muffin tin instead, and my reduced circles fit inside each slot perfectly. I put a spoonful of filling into each cup, used the remaining dough to cover each nascent pie, and popped it in the oven to bake. 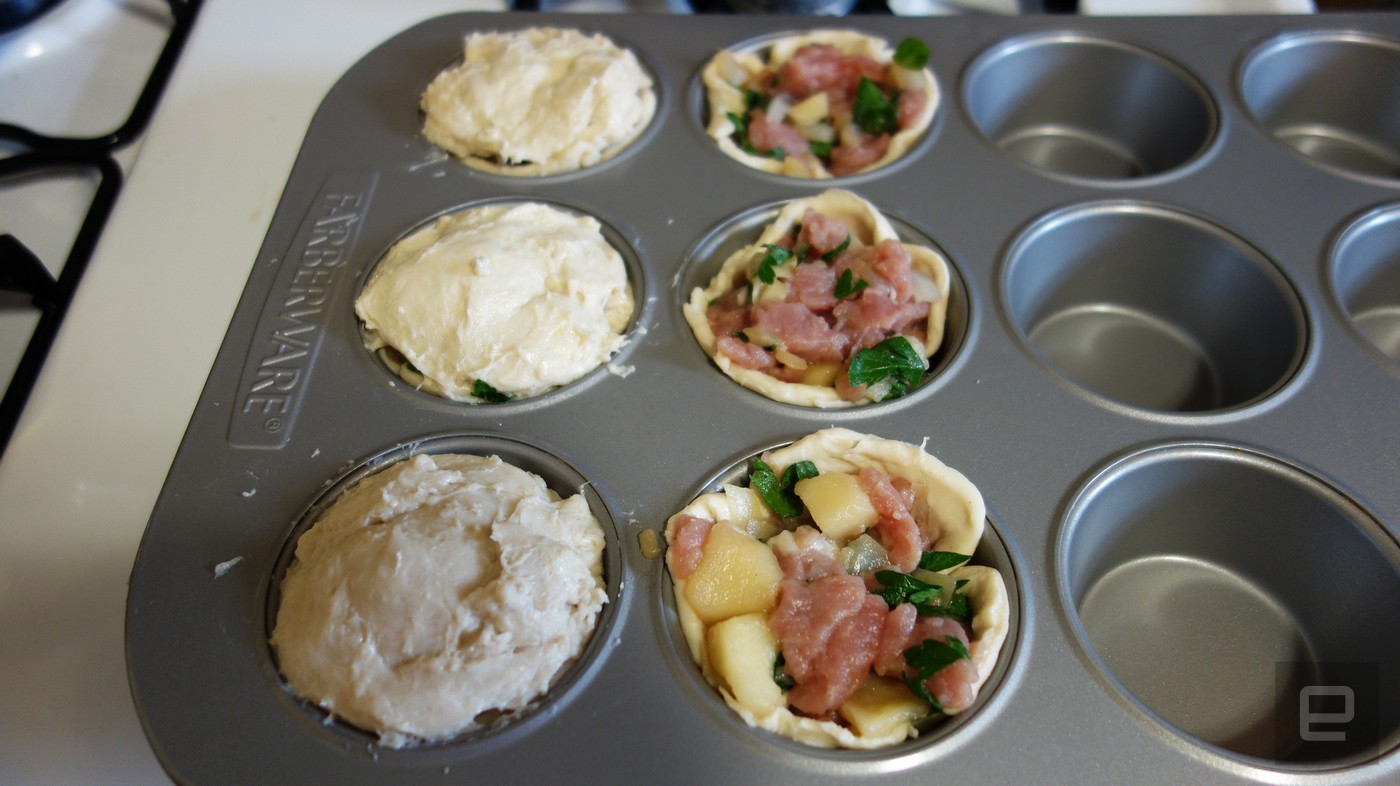 While I waited I worked on the garlic chips. The recipe called for sliced garlic to be blanched three times in milk. The process of blanching can remove intense or harsh flavors, but boiling a shallow pan of milk three times felt like such a waste of dairy it depressed me, especially for something as minor as a garnish.

I took the pies out of the oven and they actually looked appetizing. Unfortunately, they never properly browned up, even after I put them back in the oven sans pan.

I assembled a full plate with all the components and it all looked pretty good. I cut one open with a fork to discover the dough never got light and flaky because of how I cooked it. It was more like a pot pie, which was fine with me. The dough was moist and chewy and had absorbed flavor well. The pork was nice and juicy too, thanks to the brining. 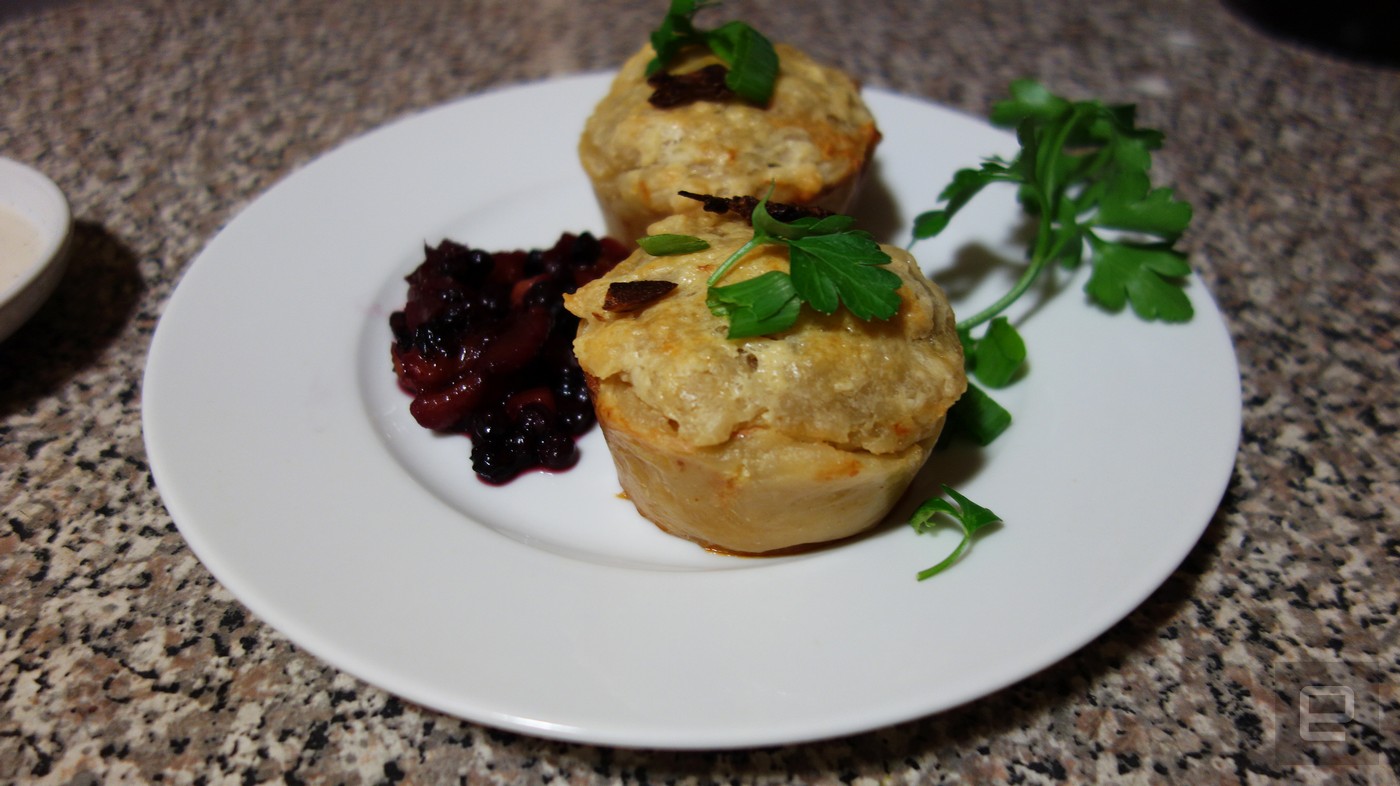 Unfortunately, the pork was also really salty. Even after draining out the brine enough remained in the meat to throw off the flavor and overwhelm the taste of the Granny Smith apples. This is where the two sauces really shined here, with the mayo nullifying the salt while the intense flavor of the compote matched the brightness of the salt and accentuated the pork well. In that moment the extra work made sense.

I had plenty of filling left over, so there was room to try again. And, since my editor Dana Wollman asked me to bring her one of the finished pies, I felt obligated to make more. But, as it’s not a good idea to be overly salty with your boss, I needed to fix the brine problem first.

That was easy; I just sauteed more apple and onion and combined them with the existing pork mix. That went a long way toward dispersing the brine, and I even felt confident enough to add more smoked salt. 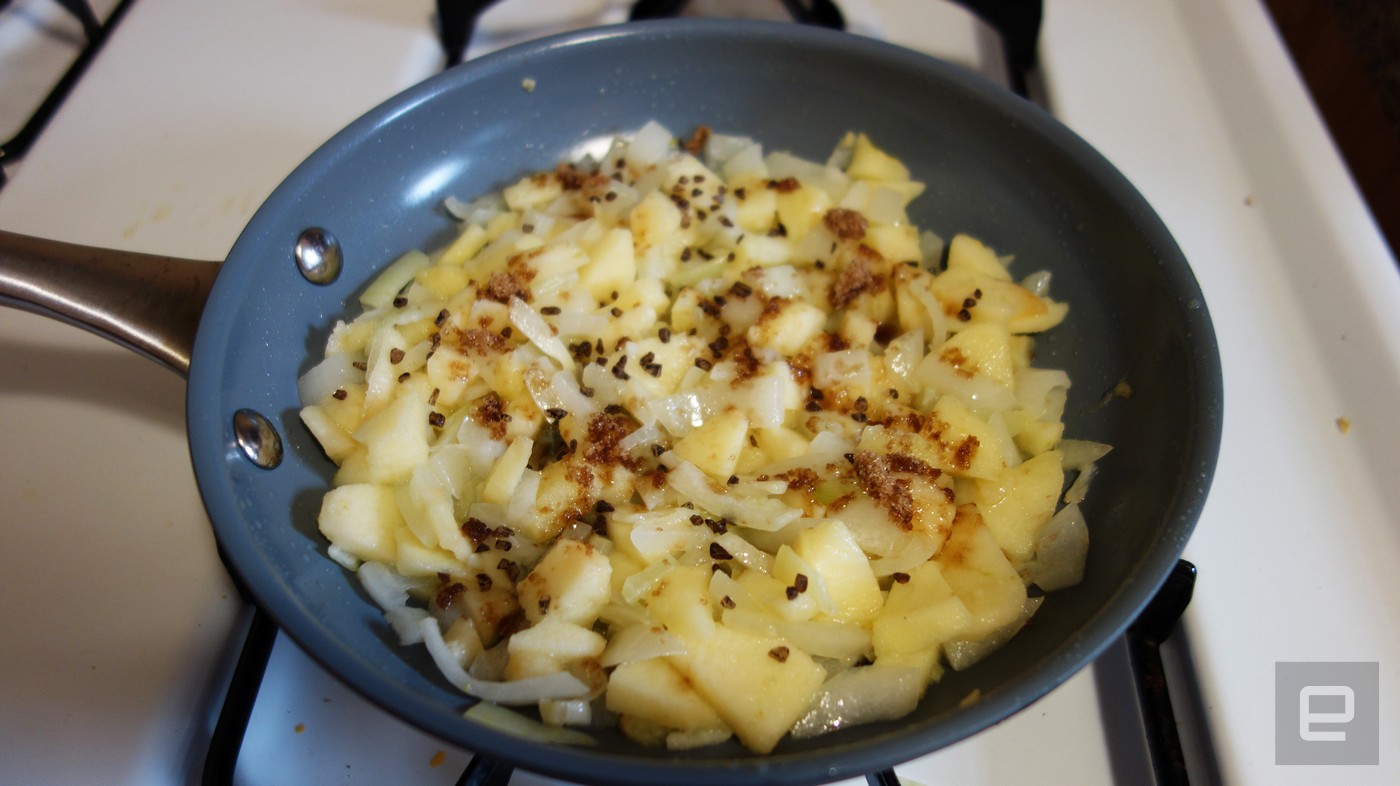 I also needed more puff pastry dough, but wasn’t thrilled at the thought of having to cut more discs and stuff them in the muffin tin again. So I was absolutely delighted to find a box of Pepperidge Farm puff pastry cups at the supermarket. They’re basically small hexagons of dough with a circle cut in the middle. After baking them ’til they’re nice and fluffy you punch out the circle and then you have a small bowl for creating hors d’oeuvres.

To make a completely covered pastry I improvised, using a second disc of uncooked dough as a lid and gluing it on with some egg wash. After 20 to 30 minutes, I had a tray of 12 puffy, flaky pork apple pies. The bottom half was a little browner than the top, but it didn’t matter: The insides were chewy and sweet, and the meat was cooked perfectly. They went over well at the office. 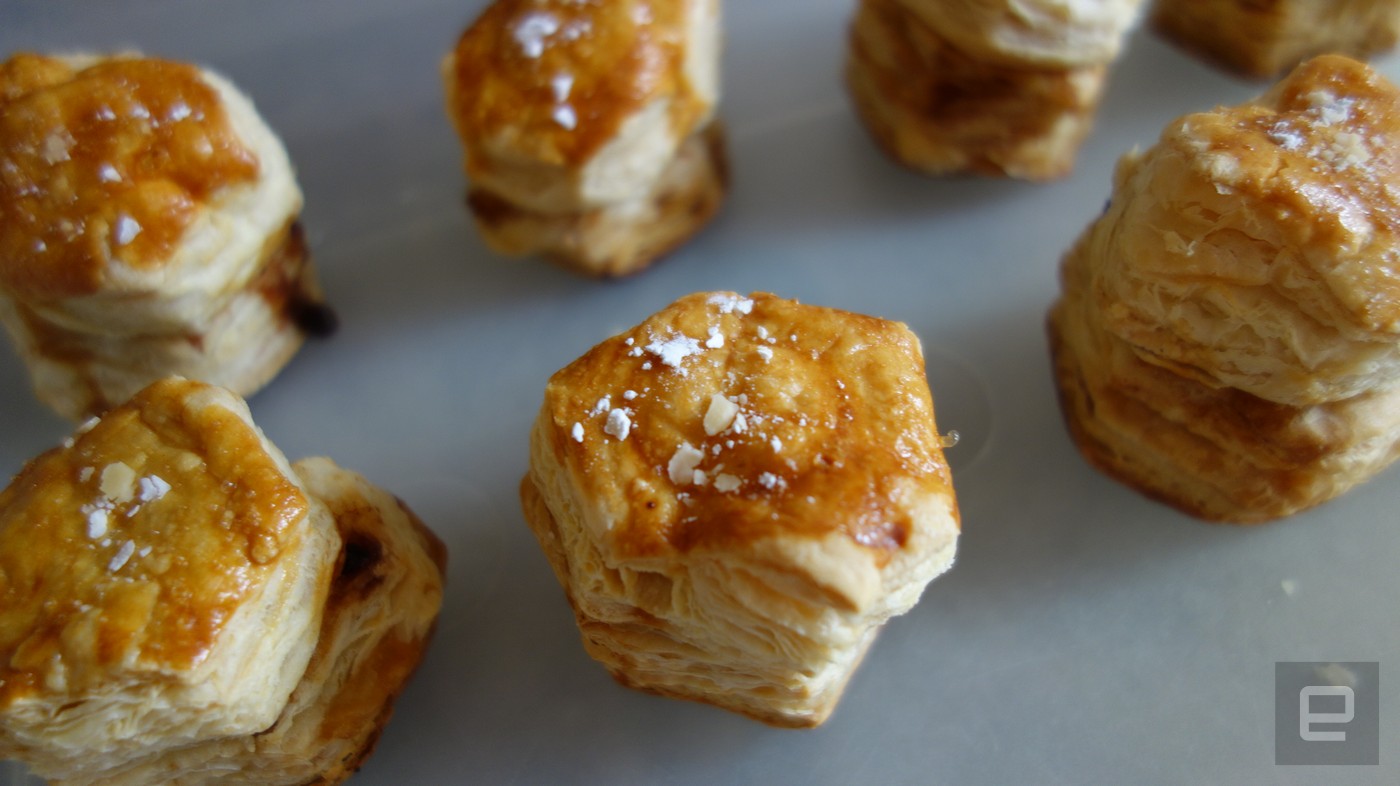 I still have plenty of filling left, and even if I didn’t, the Baltic apple pie is something I probably would make again. But in the future, I’d skip the mayo and compote and just be more careful with my brining. I wouldn’t bother with the garlic chips either: The parsley, chives and apple were fine garnishes in their own right. There’s no reason to spend so much time spent gussying up a pie that can be excellent even by itself.