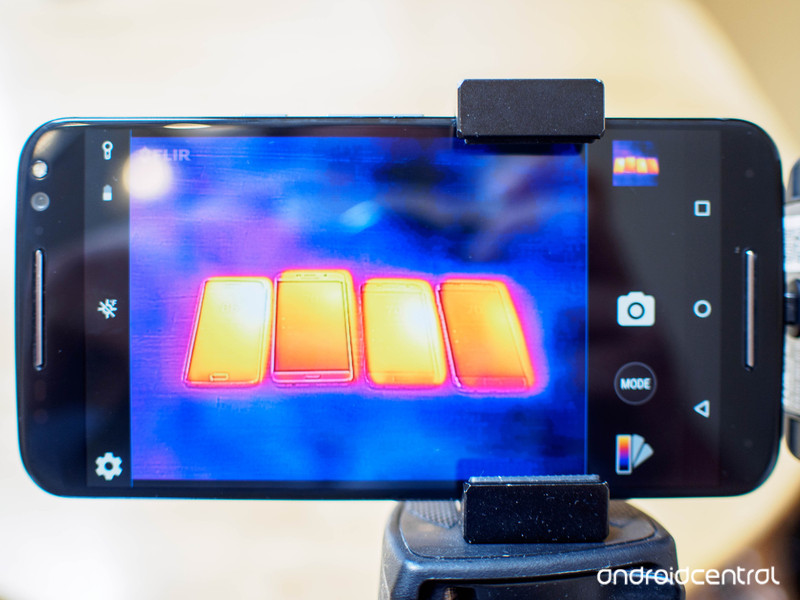 Phones get warmer when they do things, but do they get hot?

One of the many questions we see anytime there’s a new phone out there, especially after all of the excitement last year with the Snapdragon 808 and 810 processors, is how a new phone handles heat. The Galaxy S7 is no different, and like all glass phones the first thing you’ll notice about this phone is it gets a little warm during the initial setup.

Last year we saw the Galaxy S6 edge had a nasty habit of radiating quite a bit of the heat generated by its processor right next to the power button. This year, we’re taking a look at the S7 and S7 edge next to the S6 edge and Note 5 to show how differently these phones deal with heat buildup and dissipation.

To perform this test, each of the four phones used are on the same network with as close to the same app load as possible. Since these are all Verizon Wireless variants of Samsung phones — that’s just about as close to identical as we can get with phones that don’t have the Nexus logo on the back. Each phone has the AnTuTu benchmark app running to push the phone to generate some heat, and we’re capturing everything with the Flir One thermal camera connected to a Moto X Pure Edition set to Semi-Gloss emissivity in the Flir app.

The first thing you’ll notice from the images captured in this series is the noticeable difference in the starting point for the Galaxy S6 edge. The leftmost photo in the series was taken after the phones sat for 15 minutes doing nothing. The Galaxy S6 edge runs warmer than the others by default, usually by 2 to 3 degrees internally. It’s not enough that you’d notice it when holding these phones, but the thermal camera sees it easily. The Galaxy S7 is slightly warmer than the Note 5, and the S7 edge runs the coolest of the four when idle.

The Galaxy S7 edge is able to deal with the heat much better than either of the other three phones.

If you look at the middle photo in the series, you’ll see what these phones look like when the they’re in the middle of the 3D graphics part of the AnTuTu benchmark. Here you’ll see the S6 edge and S7 have quite a bit in common. The phones spike up as high as 130 degrees internally, radiating a lot of that heat right onto the power button. The older Galaxy S6 edge gets slightly warmer than the S7, but not by enough that you’d feel the difference. You absolutely feel the difference between the two smaller phones and the two larger phones in this test, but the Galaxy S7 edge is able to deal with the heat much better than either of the other three phones.

The final photo in the series was taken 60 seconds after the benchmark app was complete, and this image has the most interesting bit of information. The S6 edge gets 2 degrees hotter than any of the other phones in the middle of the benchmark, but the S7 takes longer to dissipate that heat. Samsung’s heat pipes are clearly doing the job spreading the heat, as you can see by the heat moving down the side of the phone, but the S6 edge had already become noticeably cooler at the same time. Meanwhile, the S7 edge had already returned to the same internal temperature as its resting temperature. 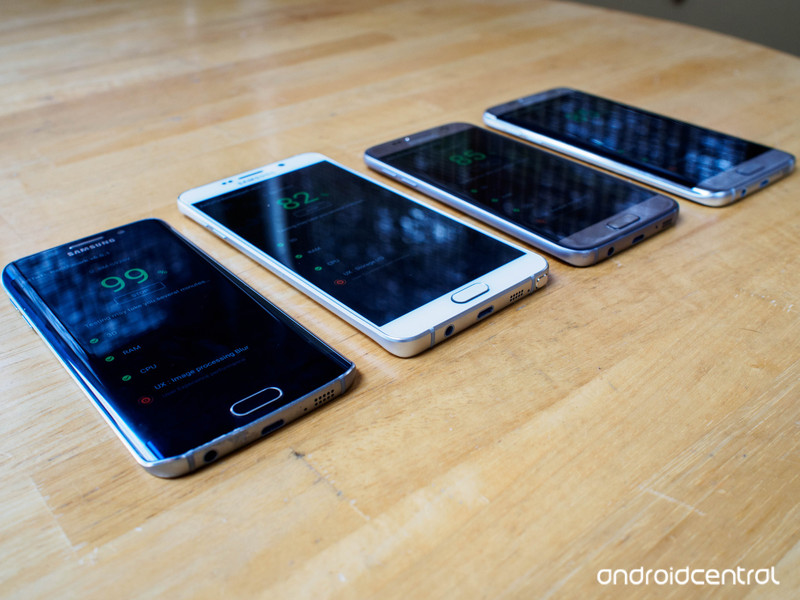 None of the phones in this lineup is accused of overheating when pushed — even though the Galaxy S6 edge dumps out of the AnTuTu 3D test once it hits 130 degrees — but heat is always a concern for some. More than anything, the difference between the way Samsung’s latest phones handle heat is interesting. The Galaxy S7 edge can handle just about anything you throw at it without getting overly warm, and when coupled with the larger battery that could be further evidence for some that this is the phone to buy.