By Mark Lukach and Nathan Edwards

Three years ago, The Wirecutter was the first publication to pit all of the major standing desks against one another in a head-to-head test. After spending hundreds of hours testing 13 desks over the years, we can say that the Ergo Depot Jarvis Bamboo (configured with a 60-inch bamboo desktop, cable management, and the handset upgrade) is the best standing desk for most people. It’s as reliable as desks costing more than $1,500, but it provides more stability, sells for half the price, and comes with a seven-year warranty that eclipses the one- to five-year policies its competitors offer.

We also recommend getting our pick for the best standing-desk mat, which will provide support for your feet and relieve pressure on your heels, back, legs, neck, and shoulders to help you stand longer and mitigate injury risks.

Who should buy this and why

If you have a desk job, making sure you move around during the day and alternate between sitting and standing can help keep you healthy and injury-free. (But if you’re reading this, you probably already knew that.) You can find a staggering amount of convincing research about the perils of sitting, though as more data comes in, it’s beginning to look like the problem isn’t sitting per se, but the opportunity cost of sitting, namely a lack of physical exercise (standing all day isn’t any better for you).

You should consider an adjustable standing desk if you spend most of your day working at a desk—especially if you have some control over what kind of desk you work at, and particularly if you work from home, as a growing number of people do.

Before you buy it, try it

We’re big believers in starting cheap: One of our testers worked at his kitchen counter for a year before he bought anything. You could also stack boxes or books on your desk so that you can give it a shot—just make sure the ergonomics are right.

You can easily piece together a makeshift standing desk, like Colin Nederkoorn’s $20 IKEA hack, the Standesk 2200. Mat Honan, BuzzFeed’s Silicon Valley bureau chief, built one at his office when he worked at WIRED. “I think I may have been the first person at WIRED to build one, and now there are eight people at the office who have one, too,” Honan told us. “It’s cheap and easy and it looks good.”

What to do if you have a laptop

Whether you’re sitting or standing, the ergonomics of a laptop are awful. The screen is right by the keyboard, rather than up at eye level, so either your hands are in the wrong place or your neck is at the wrong angle. If you work at a laptop, get a stand to raise the screen to eye level, and purchase a separate keyboard and mouse so that your forearms are parallel to the floor; otherwise you’re going to end up with neck or wrist issues. If you use the IKEA hack linked above, put your keyboard and mouse on the lower shelf and your laptop on the top one. For more options, check out our full guide.

We tested the Chairigami (left) and VARIDESK (right) standing desks, among eleven others. Photo: Mark Lukach

After deciding to focus primarily on electronic adjustable desks (thanks to their positive effect on your long-term health, as well as their popularity, reliability, and cost-effectiveness), we brought it in a total of 13 standing desks for testing.

Testing began as soon as the packages arrived. Before using the desks, we factored in how long it took to arrive, how many boxes it came in, and ease of assembly. One of our testers set up desks in his garage on concrete and also on a piece of carpeting, to best emulate most offices. He tried to work at each desk for several hours a day over the course of a week, and varied the height multiple times each hour to see how consistently responsive each desk was. He also paid attention to the subjective category of aesthetics, which in the world of furniture clearly matters. 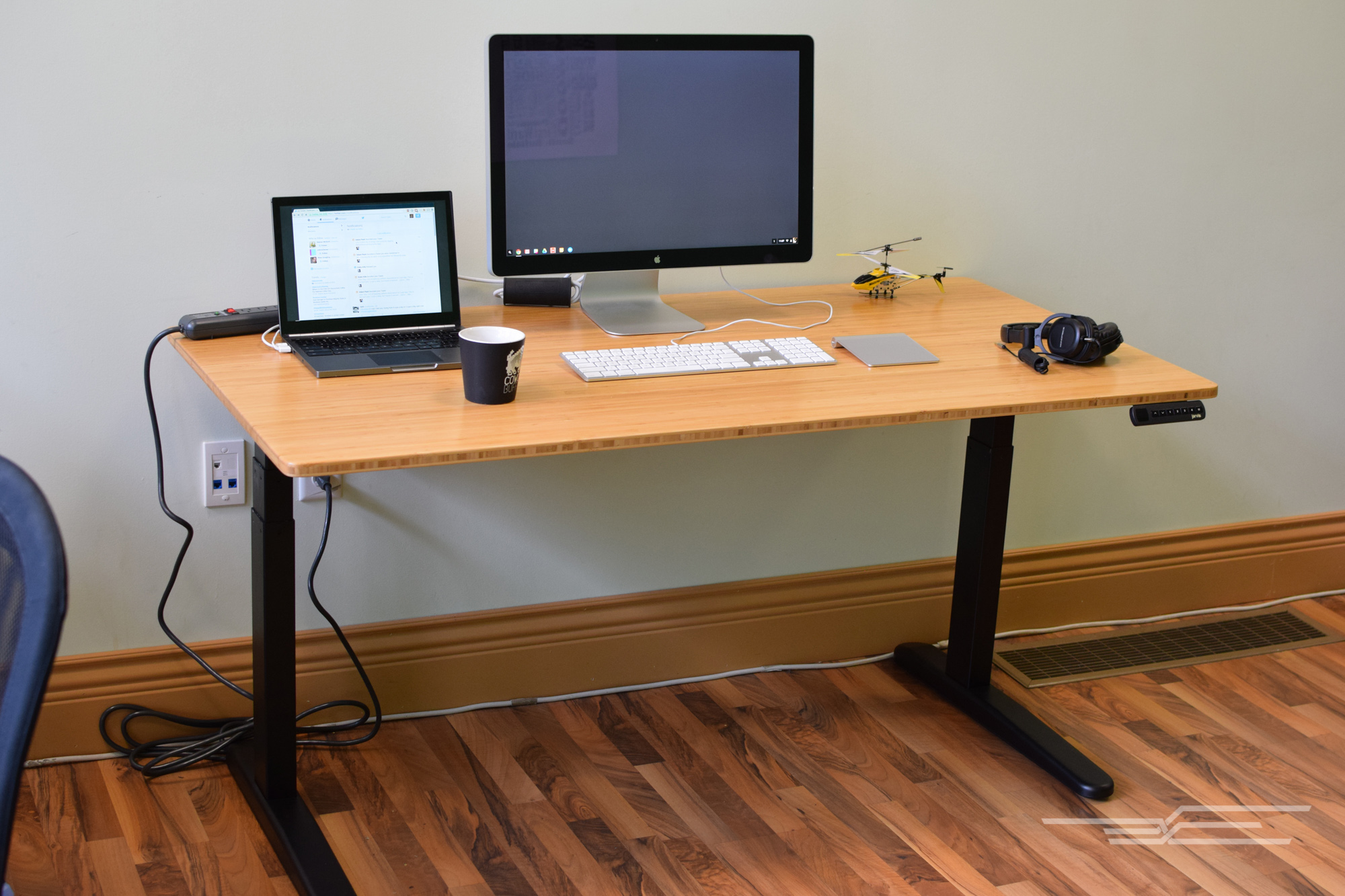 The Ergo Depot Jarvis is a great (and great-looking) desk for the money. Photo: Kevin Purdy

The Ergo Depot Jarvis Bamboo has all the essential features of a great standing desk you’d expect to cost more than $1,500, but for about half that. It has the most stable frame of any desk we’ve tested because Ergo Depot redesigned the frame so that the larger, heavier end of the lifting column is on the bottom—most desks using the original design have the opposite arrangement. This results in minimal wobble, even when fully extended up to 50 inches (which includes the height of the desktop itself). That’s high enough to fit people as tall as 6’7″ or so—whereas most desks top out at either 45 or 48 inches.

The height adjustment is controlled by a wired remote that has four presets; that means you can customize ideal sitting and standing heights for up to two people. It’s driven by a reliable electrical motor that can raise or lower at 1.3 inches per second (in line with other desks in this price range). Additionally, Ergo Depot also offers an array of functional, unpretentious accessories, like a wire-management bundle that contains a six-outlet power strip, a raceway for cable organization, and a bunch of zip ties (and mount points for those zip ties). The desk comes with a seven-year warranty and ships quickly. And if you already have a desktop you like, you can buy the frame by itself—it adjusts to work with desktops of many different sizes.

For converting your existing desk 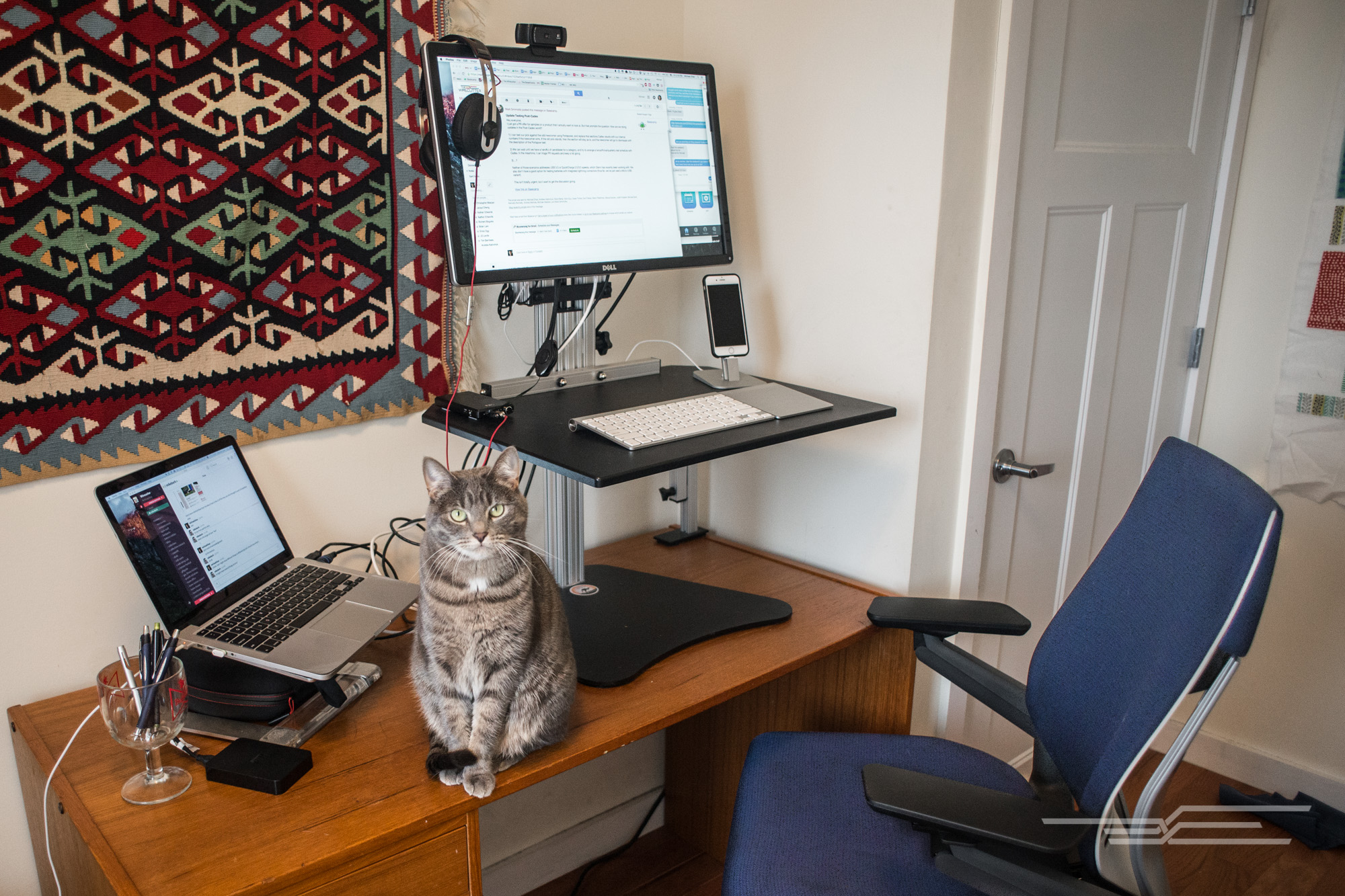 If you already have a desk that you like and you don’t want to commit to a full-size sit/stand desk, consider the Ergo Desktop Kangaroo Pro Junior. It sits on top of your existing desk and converts from sitting to standing position in seconds without electricity. Instead of motors, the Kangaroo uses pneumatic springs to lift its work surface, and you lower it by pushing it down manually. It’s much lighter and less bulky than other conversion options like those from VARIDESK, and you can easily move it around your desk if you need to.