9 things Alexa can’t yet do – CNET 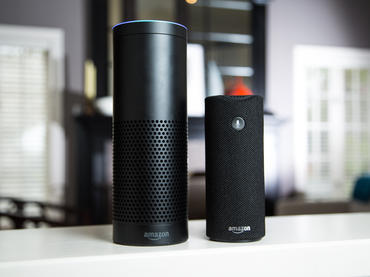 Even for a connected speaker, Amazon’s Alexa can do quite a lot. It can reorder essentials, Domino’s pizza and call an Uber. It can stream practically any audio, control your smart home and wake you up every morning.

More useful features are in the speaker’s future, thanks to third-party add-ons called Skills and a growing list of native integrations that Amazon has added.

That said, there is still plenty Alexa can’t do — things that, at times, seem like no-brainers.

It only makes sense that a connected speaker like Alexa would come equipped with some killer alarm features. However, that isn’t the case.

Seeing as Alexa’s primary function is being a speaker, you would imagine some of its music features would be available as alarm sounds. Sadly, that’s not possible without a workaround that involves streaming the alarm sound from your mobile device via Bluetooth.

Thanks to IFTTT integration, Alexa now works with dozens of smart home devices, can be used to create tasks in Todoist or trigger multiple recipes with a single phrase.

The shortfall of Alexa’s IFTTT integration is the lack of any actions whatsoever. Alexa can only be used as a trigger in IFTTT. That means I can’t, for example, complete a task in Todoist and have Alexa play a song. Or as Ry suggested, you can’t have Alexa play sound bites, such as a dog barking, when motion is detected or a door opens in the middle of the night.

If you want Alexa to do more than one thing, you can’t tell it everything you want it to do at once. For instance, saying, “Alexa turn on the lights, play the Evening Chill playlist on Spotify and turn the temperature up,” won’t work as intended.

Currently, you must divide every command into its own statement:

The only workaround for chaining multiple actions to a single Alexa command is by creating several IFTTT recipes with the same trigger phrase or a Yonomi routine.

Alexa offers virtually nothing in the way of notifications, audio nor visual. With the ability to read top headlines to you in your Flash Briefing, the next logical step — privacy concerns aside — would to have Alexa read messages from your inbox, new text messages or speak the name of the person calling you.

You can order certain products from Amazon using Alexa, such as eligible items you’ve purchased before or top Amazon products. You cannot, however, ask Alexa for a status update on your recent orders.

Instead, you’ll have to rely on the Amazon app, your own package tracking app or smart lights to do that for you.

Here’s everything the Amazon Echo can do…

Alexa devices have only three words which will wake them: Alexa, Amazon or the name of the device (Echo, Dot or Tap). If you want a truly customized wake word, you’re sadly out of luck.

And if you’re anything but a native English speaker or you aren’t fond of a female voice for Alexa, there are currently no options for customizing either of those settings.

It’s no secret that Alexa is always listening. And every time you speak a command, that audio snippet is recorded, saved, and transcribed. Every audio file Alexa records is saved to your Amazon account.

You can open the Alexa application and listen to the recordings of some of your recent commands. But possibly one of the most bizarre missing features it a voice memo function. The least it could do is allow you to export your own voice commands from within the app, but that’s not currently possible.

It would also be nice to leave voice memos for your significant other or roommate or send audio snippets to other Alexa users. For example:

This of course, would require better friend or contact management from Alexa, as well as voice recognition, which brings me to my final point.

Alexa cannot distinguish between two different voices. While my girlfriend and I have two separate profiles on the Echo, it treats us both as the same user.

If Alexa could distinguish between multiple voices, it could switch profiles on the fly, allow you to manage separate shopping or to-do lists, and treat multiple users like … more than one person.

I wouldn’t be surprised if many of these features are already in the works or, if it’s possible that some of them can work with a skill, a third-party developer is on it. But despite all the great things Alexa can do, many of the missing features are some that you would imagine such a smart speaker should already be capable of.

Read more from News
← Marshmallow will hit the BlackBerry Priv by early May
Apple Turns 40: Reflecting on Four Decades of History →