‘Minecraft’ on mobile to get mods and command blocks


On the desktop, command blocks are useful tools for experienced Minecraft players. Enter a forward slash in the chat window and you can enter some pseudo-programming to teleport, change the weather and more. They’re not available in the Pocket Edition, a separate version for phones and tablets, but that will soon change. In an interview with CNET, Minecraft lead developer Jens Bergensten confirmed that command blocks are coming to both the mobile and Windows 10 versions of the game.

Microsoft has also confirmed that mods will be coming to the mobile, Windows 10 and console games. It should provide feature parity — more so than before, at least — to each platform and open up its advanced tools to a broader group of players. That’s important as Microsoft pushes into the classroom. The company is working on an Education Edition, based on MinecraftEdu, that’ll be out later this summer. Some schools will use it to teach coding, so it makes sense to offer command blocks in the regular versions of Minecraft, where students can then practice at home.

It’s time once again for Build, Microsoft’s annual developer conference, where the company lays out its plan for the year ahead. Since Windows 10 is already out there in the wild — where it’s enjoying quite a bit of popularity — we don’t expect too big of an update on the OS front. Still, we’ll probably see a few additional features; perhaps richer Live Tiles, greater Cortana integration and even more of those universal apps (Skype, anyone?). It seems especially likely that we’ll hear more about how Windows 10 apps will work on the Xbox One. On top of that, we’re expecting more Office and productivity suite news and fingers crossed that we’ll get an update on Windows Phone too. Last, but certainly not least, we’ll definitely get to see more of HoloLens, Microsoft’s AR headset that’s set to head out to developers later this week. To get the full rundown of what will be announced at the keynote, tune in to our liveblog right here at 11:30 am ET / 8:30 am PT.


Welcome back to the show, everyone! We’re all getting pretty excited about the VR headsets coming to market this year, and a good portion of those users will be wearing glasses.

But what about those of us without great depth perception due to monocular vision? Jessica Conditt, Engadget Senior Editor, joins us again to set us straight! She’s tested all the major headsets, and has some pointers for her fellow four-eyed gamers.

As always, keep sending those questions in using the hashtag #DearVeronica! Subscribe in iTunes, RSS or YouTube!


Just because Microsoft is less focused on monolithic Windows releases doesn’t mean it’s forgetting to deliver big upgrades. The company has used Build 2016 to announce an Anniversary Update for Windows 10 that brings some hefty improvements. For one, it brings Windows Hello’s biometric authentication to all kinds of apps, including the Edge browser — you can sign into a website with your fingerprint. Pen support also gets its due with a sticky note app, a sketchpad and virtual drawing tools like a ruler and a stencil. The upgrade brings more advanced gestures and pen input, a Linux command line shell, smarter Cortana commands (such as sending files to colleagues) and unification between the Windows 10 and Xbox One app stores. The Anniversary Update arrives this summer, so it shouldn’t be too long before you can give its features a try.

Free for everyone running #Windows10: the Anniversary Update arrives this summer. #Build2016 pic.twitter.com/pTbtutRNvy


Now here’s something you likely didn’t expect at Microsoft’s Build developer conference: a staple feature of Linux (and Unix) is coming to Windows 10. The company is integrating the Bash command line shell and support for Ubuntu Linux binaries into Windows 10’s Anniversary Update. This is naturally big news for developers who want to use command-line tools while creating apps, but it’s also important for power users who’d otherwise be tempted to install either third-party tools (like Cygwin) or a virtual machine.

Using Bash in not-quite-native environments isn’t entirely new, of course. Apple’s OS X has had the feature from the outset. However, this and other efforts (such as double-clicking to install universal Windows apps) show that Microsoft is determined to let you install and run apps the way you’d like, rather than make you jump through hoops.


Redmond surprised developers at Build by launching Linux Bash support, but it’s now gone back to its bread and butter with updates to its Universal Windows apps. As a reminder, those are apps that work across Windows mobile, Xbox and desktop platforms. Perhaps the most important among those are from Facebook, which now has gone Universal for both its main app and Messenger. Other social apps, including, Twitter, Instagram and Vine have received new updates.

Other new versions of popular apps include Uber, Hulu, Dailymotion, Skype and, yes, Engadget. Xbox gamers, meanwhile, get updates to Tomb Raider, Disney infinity and other titles. Microsoft courted some controversy recently after it closed its store to third-party apps, but has now said it will allow modifications to such apps. In addition, it’s recently introduced software called Centennial to import Win32 software.

Windows desktop users may not care as much about Universal apps, since the features are already accessible by browser. However, the new apps are pretty important for Microsoft’s Windows 10 Mobile plans. Social media apps are obviously crucial, but so are other popular categories of apps like banking. As such, the new app from American Express is bound to be popular, as is the new offering from Starbucks.

Microsoft and NASA want you to walk on Mars


Microsoft and NASA have been collaborating on ingenious ways to use mixed reality as an aid for astronauts since last year. Last December, as part of NASA’s Sidekick project, two HoloLens headsets reached the International Space Station to assist and guide the crew.​ Now they’re bringing the experience of space exploration to the public with Destination: Mars. The interactive exhibit opening at NASA’s Kennedy Space Center in Florida this summer will allow visitors to walk on a virtual version of Mars. The planet has been created with images from NASA’s Curiosity Mars Rover so you can expect your simulated exploration to be accurate. The experience will be further enhanced with a holographic version of Buzz Aldrin, an Apollo 11 astronaut who will guide you through your stroll in space.

The upcoming exhibit is a new spin on existing software called OnSight, which was the first step in Microsoft’s partnership with NASA. It gave scientists the ability to navigate a holographic Mars. “OnSight makes the whole process of analyzing the data feel a lot more natural to me,” Abigail Fraeman, a Curiosity team member at JPL said in a post. “It really gives me the sense that I’m in the field when I put it on. Thinking about Martian geology is a lot more intuitive when I can stand in the scene and walk around the way I would if I were in the field.” Now the space agency is opening up that immersive experience for visitors to experience a slice of space.


We knew Microsoft would be shipping the first wave of HoloLens pre-orders to developers today, but now we’re getting a look at what that kit will look like. Inside the box, you’ll of course find the mixed-reality headset, along with a sleek carrying case for when you want to take it to a friend’s house. There’s also a device called Clicker, which is designed to help you navigate the user interface. If you missed out on Wave 1 of pre-orders, Microsoft says it’ll be fulfilling the rest over a period of 2-3 months for each.

Anyone can turn their Xbox One into a software dev kit


The dream of turning your Xbox One into a software development kit is finally real. Phil Spencer announced today during the Build keynote that it’ll be pretty simple too. Essentially, download the Xbox Dev Mode app, register as a developer and that’s about it. From there you can swap back and forth between a retail game, Microsoft’s Ashley Speicher was playing Forza Motorsport 6, and whatever app you’re working on be it a game or otherwise.

Speicher demoed a photo editing app where she was able to add a chat bubble and text to an adorable image of a thick-maned dog, simply using her voice and Kinect; it looked way easier than trying to use an onscreen keyboard. But given how temperamental Kinect is for voice recognition, how well that’ll fare in the wild could be an absolutely different story.

Bringing the developer kit to Xbox One “isn’t just a hobby, it’s a commitment to empower every developer on the planet,” Spencer said. There’s a preview version available starting today, but Microsoft’s indie-developer-minded (who this update will benefit the most) Chris Charla told Polygon that you might run into some issues if you’re playing around with it right now.

Spencer also mentioned that the Windows Store and Xbox Store will merge bringing things like season passes together with Cortana running on Xbox One. Oh, and playing music in the background will be a part of the Xbox One after the anniversary update as well. Further than that, Microsoft has developed tools that can turn old games like Age of Empires 2 HD into cross-platform apps. Hey, alright!

The future Spencer hinted at previously, about forward compatibility and backward compatibility being a focus for Windows 10 gaming is actually coming to pass. Of course, how this all will work outside of the controlled environment demonstrated onstage today is another matter entirely. Given how simple things like Xbox game streaming to Windows 10 PCs works, though, there might not be much of a reason for concern.

According to TechCrunch, Apple’s goal with Safari Technology Preview is to gather feedback from developers on its browser development ahead of launch through a method that’s more easily accessible than WebKit.

Of course, Apple has for a long time offered Nightly builds of WebKit, the open source browser engine that today runs on hundreds of millions of devices and powers Apple’s Safari. However, getting access to these builds takes a bit more effort than using the new Safari Technology Preview browser. Instead, with the new browser, its updates are distributed every two weeks by way of the Mac App Store’s software update mechanism. That means it’s less hassle to run a browser that features the latest advances in web technologies, including HTML, JavaScript, CSS and WebKit.

Safari Technology Preview can be run side-by-side with the existing Safari browser, and it’s able to be set as the default browser on a machine. It includes local data stores for history, bookmarks, cookies, and cache, and it supports syncing of browsing history and bookmarks over iCloud. Visually, the Safari Technology Preview icon is designed to resemble the Safari icon, but it is purple in color instead of blue. 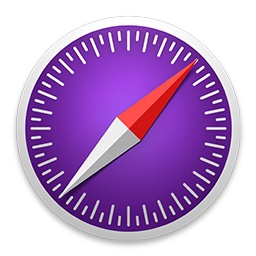