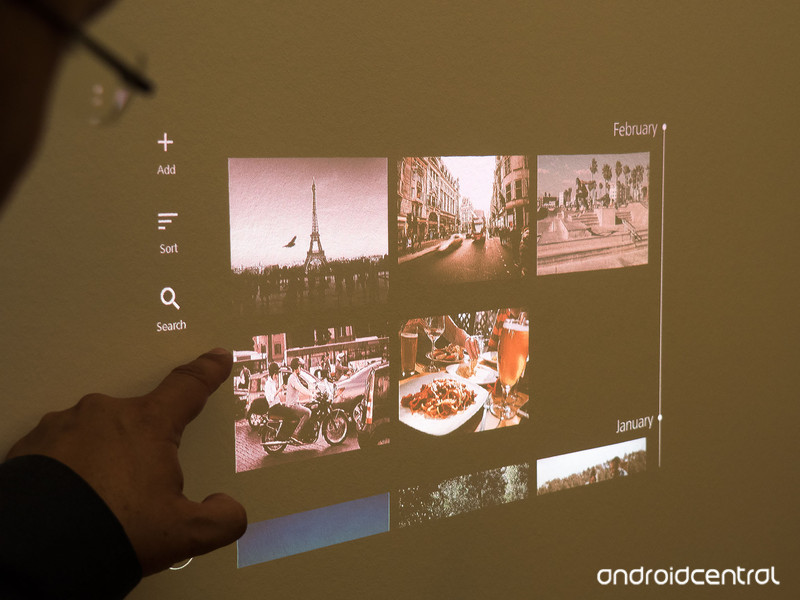 The Sony Xperia Projector — still an experimental “Concept” for the moment — shows how a smart projection system could serve as a hub for your family’s digital lives.

In additional to products like the Xperia X series and Xperia Ear smart earpiece, Sony’s Mobile World Congress presence was big on “Concepts” — work-in-progress experimental gadgets intended to show the firm’s future direction. One such device is the Xperia Projector Concept, a connected sensor-plus-projector system designed to serve as a digital hub for your home.

In its current (and very much unfinished) state, the Xperia Projector is a small box capable of projecting images onto a surface directly adjacent to it, and sensing touches on that surface. In essence, it can turn a table or wall into a rudimentary touchscreen. The built-in camera, Sony tells us, will be able to detect someone approaching the unit, and even recognize individual people within a home, showing them specific notes or reminders accordingly.

The brief demo setup shown at MWC starts with a large clock display with calendar notifications on the right, and notifications like missed calls on the left. A right swipe brings you to a family calendar, complete with photos and notes attached to each date, one of a number of interactive slides in this proof-of-concept. Others include recipe readout, a notepad, through which you can draw on the wall or table with your finger, and a recipe readout.

Unlike the Xperia Agent, Sony’s other experimental projector gadget, this device is supposed to serve more as a digital hub than a personalized assistant. It also lacks some of the personality of the Agent, with its cutesy design and cartoon-like movements. But maybe you’re looking for something a bit more neutral in a shared device.