NASA challenges you to design experiments for Mars and beyond 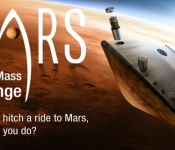 Want to play a significant role in NASA’s space exploration efforts without spending years in training? You now have a better chance of making your mark. NASA has launched Solve, a site that makes it easy to find all the agency’s public competitions and crowdsourced projects. You’ll mostly see previously announced efforts there right now, but the inaugural offering is definitely worth a look — the $20,000 Mars Balance Mass Challenge asks you to design an experiment or technology payload that will double as ballast on future Martian explorers. You’ll have until November 21st to submit your brainstorms, and you’ll find out if your work is Mars-bound sometime in mid-January.