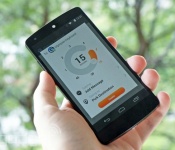 It’s not hard to share your whereabouts from your phone, but you usually have to dive into specific apps to do it; what if your friends on a new social network want to know that you’re nearby? That’s when Glympse’s new Keyboard app for Android may come to the rescue. So long as you have the regular Glympse on your phone, the input method lets you share your location through virtually any app. If there’s a text box, you can probably let others know where you are. You don’t have to give up keyboards like SwiftKey or Swype, either, since there’s a Quick Send mode that gets out of your way as soon as you’ve done. Glympse Keyboard isn’t going to be as sophisticated as apps that have position sharing built-in, but its sheer ubiquity could help the next time you’re meeting your friends for a night on the town.

Read more from News
Android, App
← In this Chinese city, phone addicts get their own sidewalk lane
Inhabitat’s Week in Green: Tesla Gigafactory, Blue Lagoon and an electric unicycle →