Apple iPhone 6 and 6 Plus vs Android: The flagship showdown 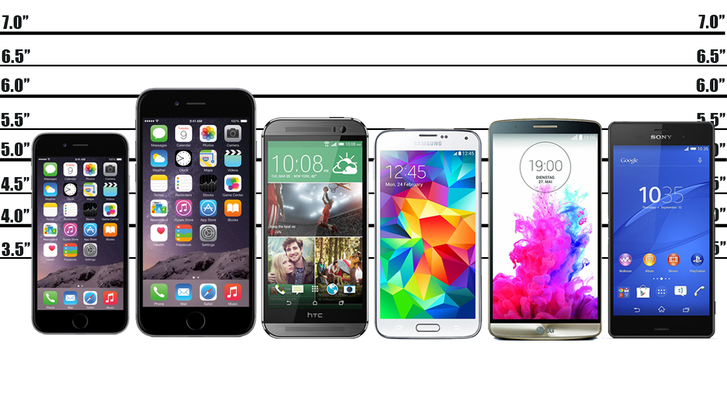 Apple has announced not one, but two new iPhones, which only means one thing – there are two new flagship smartphones that have been added to the mix of already stiff competition.

If you are looking for the lightest of all six devices, the Apple iPhone 6 is the winner, followed by the Samsung Galaxy S5 at 145g.

For those after the slimmest, both Apple iPhones are thinner than any of the Android competitors, with the Sony Xperia Z3 taking third place for its 7.3mm build.

The biggest display award goes to both the LG G3 and the Apple iPhone 6 Plus, both offering 5.5-inches.

LG mops up the sharpest display however, with its 2560 x 1440 resolution providing a pixel density of 534ppi.

All the other Android smartphones offer a 1920 x 1080 pixel resolution.

The smallest display is Apple’s iPhone 6, which is 0.3-inches smaller than the next contender, and also the lowest resolution and ppi.

The Apple iPhone 6 and Apple iPhone 6 Plus both feature the company’s latest A8 processor on board with 64-bit architecture, supporting the 64-bit software of iOS 8. It has the M8 coprocessor to handle motion.

Android is not 64-bit yet, which is lucky as none of the flagship Android devices support it.

All of the Android devices have a quad-core Qualcomm Snapdragon processor under the hood but the Sony Xperia Z3 has the most RAM at 3GB.

Comparing the devices like for like is very difficult: with undisclosed hardware from Apple, and different operating systems, there’s no easy way to measure them on the spec sheet.

If you arbitrarily want highest number of pixels on the rear camera, you’ll want the Sony XperiaZ3 with its 20.7-megapixel sensor.

If you are a selfie snapper, then you’ll want the HTC One (M8) for the best front camera with its 5-megapixel offering.

This is the fiercest battleground of all, but we’d expect the iPhone 6 and iPhone 6 Plus to be strong performers with the latest tech they are offering including HDR selfies. That’s not to say they will win though, we suspect the camera battle to be the hardest fought.

For the biggest battery capacity, the Sony Xperia Z3 wins the group at 3100mAh, which means the longest standby too at 740 hours.

The Samsung Galaxy S5 and the LG G3 fight for the most amount of talk time though, both claiming up to 21 hours.

For audio playback, you’re answer is the Sony Xperia Z3 again with up to 130 hours of music playback.

Apple doesn’t offer microSD support but its iPhone 6 and iPhone 6 Plus will come in 16GB, 64GB and 128GB storage capacities.

This means Apple’s iPhone 6 and iPhone 6 Plus offers the biggest internal storage options.

All the Android flagships have microSD slots for storage expansion up to 128GB, but typically offer 16 or 32GB storage.

The Apple iPhone 6 and iPhone 6 Plus has iOS 8 on board, which means a whole host of new features but its most unique offering is Apple Pay, which is launching initially in the US.

In terms of unique features for the Android handsets, the HTC One (M8) has a Duo Camera that captures depth of field information, the Samsung Galaxy S5 brings a heart sensor to the mix, theLG G3 uses laser focusing and the Sony Xperia Z3 is waterproof and lets you play PS4 games.

The cheapest SIM free handset on our panel of Android flagships is the LG G3, at £479 (16GB), which is the most affordable overall.

The iPhone 6 Plus is the most expensive and ironically has the same size display as the LG G3.

It depends what is most important to you as to which of the usual suspects will win you over, but if you just take them all on number value and nothing else … this is how it goes down.

The smallest, lightest and slimmest phone is the new Apple iPhone 6.

The biggest battery capacity is the Sony Xperia Z3.

The most internal storage goes to Apple’s iPhone 6 and iPhone 6 Plus, but all the Android devices offer microSD card support.

And that friends, are the tech specs crunched.
.CPlase_panel display:none;