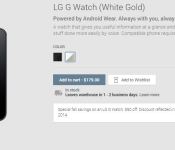 The LG G Watch has dropped its price tag by $50 in the Play Store today. That brings the Android Wear powered smartwatch down to $179.  That makes it $0.99 less than Best Buy has been selling it for the last few weeks. The new price tag is only going to be effective until September 23rd as part of a special fall savings.

It probably isn’t a coincidence that the price dropped the same time Apple did their iWatch announcement. You know where to go to grab this in the Play Store, or you can just go to Best Buy and not wait on shipping.

The post LG G Watch goes on sale in the Play Store for $179 appeared first on AndroidSPIN.