iPhone 6 pricing in the UK: what you need to know 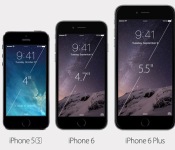 The rumours were true: Apple’s finally expanded the size of its smartphones and launched two new models: the iPhone 6 and the iPhone 6 Plus. With the company’s new A8 processor controlling things, the 4.7-inch iPhone 6 and 5.5-inch iPhone 6 Plus clock in at least 25 percent faster than the iPhone 5s, offering up to 50 percent better battery life and more power for the most intensive 3D games. There’s also an improved M8 motion coprocessor for better fitness tracking, as well as a dedicated “image signal processor” that’ll deliver slower-motion video (up to 240fps) while offering clearer and more vibrant photos (thanks to its new Focus Pixels auto-focusing tech).

Specifications aside, you’re probably wanting to know when both devices will become available and how much they’ll cost. Both the iPhone 6 and iPhone 6 Plus will go on general sale from September 19th, but in keeping with tradition, Apple will open pre-orders a little earlier. Come this Friday (September 12th), you’ll be able to secure a new unlocked iPhone for the following prices:

You can, of course, also order your device direct from an operator. EE, Vodafone, O2 and Three have already confirmed they’ll be ranging the devices, possibly allowing you to reduce the cost if you sign up to a 24-month deal. While none of the carriers have announced pricing, we’re on the case and will keep you updated ahead of Friday’s pre-order go-live.