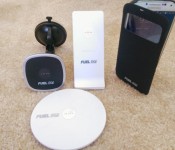 We have been working with Patriot since CES in January 2013. While many might know them from their computer RAM offerings, the company has more recently started to put their talents to work in the mobile sphere. Some of the first products we were able to use were the Patriot Fuel+ battery banks and the Patriot Stellar OTG USB thumb drives all performed extremely well. We were given the chance to take a completely new product on a test run and it certainly has been one of the best we have personally seen. Meet the Patriot Fuel iON wireless charging kit.

This particular kit is for the Samsung Galaxy S4, but they have another kit for the iPhone 5 and will be offering more conversation cases soon. The Samsung galaxy S4 doesn’t natively offer wireless charging like the Google Nexus 5 does. In order to utilize wireless charging of any sorts, you need a special add-on for your device, There are many different ones available, but most of them all seem to all center around Qi charging. While Qi is the more standard wireless charging, it still isn’t as fast and efficient as directly plugging in your device. Seeing most of them taking twice as long to charge a device makes them really only great for charging while you are asleep. The Patriot Fuel iON wireless kit takes a slightly different approach and uses magnets.

In the case of the Samsung Galaxy S4 you simply remove the back plate, slide your S4 in and clip it into place. The two gold prongs on the inside back seat with the gold slots found on the back to make the connection for the power to pass through to the battery.

Located on the rear is a round black pad with a four gold ringed plate. This plate is what connects to your wireless charger. The outer case is a hard plastic/rubber material that is soft to the touch, but not slippery. It offers cutouts on the right for the power button and the bottom for the USB port. The volume buttons are covered by the folio, but is still accessible when closed if need be.

The case system for the Galaxy S4 also overs the clear view window flip cover. When closed it prompts up the time and date and when you open it the device automatically turns on and is accessible. The inside flap offers a soft velvety material to help protect the screen. While the outside is a vinyl feeling material.

The case for the device is pretty straight forward. Where the magic happens comes from the variety of charging cradles that have been developed. The entire suite of cradles or base stations, cover your home, your office and your car. Really unifying your ability to charge your device quickly and easily no matter where you are.

First up we have the charging puck. This simple round puck puts the magnetic charging receiver right in the center of the puck. It is slightly elevated from the remainder of the puck.

On the bottom you have 4 soft rubber feet to stabilize the puck and protect the surface you have it placed on. There is a micro USB input port on the rear for you to plug-in the puck to your PC or wall plug.

Next we have a desktop dock. The dock sits a slight angle and is minimal in size. It is made of hard plastic with the Fuel iON logo on the front.

On the rear is the Patriot logo along with your micro USB input port.

Finally we have the car kit.

The car kit comes with a dual port USB car charger. This allows you to use the car kit mount and still offer your passenger a port to charge their device as well. You are provided with a base plate that has 3M adhesive on the back to create a spot for the sticky suction cup to adhere. Most people won’t need or use it, but it is handy if your dash is tore up or placement on your windshield is impractical.

All of the charging bases come with a micro USB cable to connect them to your wall charger, car chargers or USB ports on your PC. None of this by its self is revolutionary, but the fact that the whole system uses magnets is pretty outstanding. All you have to do is get the center plate on the rear of your device relatively close to the charger and it pulls its self into place. This also allows for each charging dock to allow full 360 degree rotation of the device at anytime. This give you the freedom to go from portrait to landscape simply by spinning your device. No need to unclamp, unclick or unplug anything.

Patriot put another claim to fame on their newest product that said the charging system is 99% efficient compared to direct wired charging. Charge rates are a very important thing for me. While I spend  a lot of time at home working, writing and spending time with my kids, there are times where I know I have to leave in 45 minutes and haven’t charged my phone all day. I am a bit neurotic and don’t like to leave my house for any amount of time with anything less than 75% charge. Heck, even at 75% on a 2 hour trip I might just take a battery bank.

Testing of the charge rates were pleasantly surprising. As you can see in the screenshots below, I started at 15% charge at 5:23 p.m.

The Galaxy S4 reached 100% charge at 8:33 p.m., just over 3 hours. Considering that I have seen wireless charging states come back with devices taking 6+ hours to reach 100%, I’d say that 3 hours is pretty good. This test isn’t 100% accurate either. There are fluctuation due to data connections, notifications, and the likes throughout the charging process. It is likely to have charged a little faster with everything off, or the device completely powered off. Most of us don’t do that when we charge our devices though.

The kit isn’t perfect, there are a few things that I was not fond of that could be a deal breaker for you. Personally I have always hated the folio cases. They just aren’t my thing. The good news though is that cutting it off flip should be pretty easy. I haven’t cut mine just yet as the S4 I have currently for testing isn’t being used as my daily driver at the moment. Rest assured though, it will find its demise soon.

The other aspect that I am not particularly fond of is that the edges of the back of the device aren’t completely covered when in the case. You can see where the back cover should be covering the rear compartment of your device.

This could be an issue, but I haven’t run into any problems like lint or debris finding its way to the back compartment. I would like to see Patriot simply provide a redesigned rear plate that offers cutouts for the pins. More so for protection / peace of mind, but also so you could take your device out of the case and not have to remember where your back plate is. The S4 will fit in the case with its back plate on. I did it by accident one night and was confused on why it wasn’t charging.

The window on the front of the case is also a potential point of irritation. There are two films placed over the plastic. One on the inside and one on the outside. They scratch up. I removed both and was greeted with a much clearer screen. After about 3 days though scratches started appearing again. While this is annoying to me, it doesn’t hinder my use. I can still see the time, date and relevant information. I am an habitual flap opener too. meaning that I always flip it open for everything, even to check the time.

On a purchasing stand point I do find it a bit annoying that the case is bundled with the charging stand. This means you have to buy the stand and case together. You don’t have the option to just buy the case. Nor do you have the option to buy the case and combo it with the car or charging puck. Hopefully they offer the cases on their own in the future. To top it off, the only case option at this time is the folio case. I know not everyone is a fan of the folio. You can simply cut the flap off, but that defeats the purpose really. You shouldn’t have to modify a purchase to fit your needs. Hopefully if they move the cases to individual sales they will also create a more standard type of case without the flap.

The case and folio case do look pretty nice. It feels solid in your hand. You don’t have any fears that the phone might fall out of the case when you place it inside. I have taken it in and out multiple times and it still clicks in with a click and isn’t the easiest thing to take back off.

It charges quickly and efficiently. Going from 15%-ish to a full charge in 3 hours and 10 minutes is plenty fast for me. Since it uses the pins on the rear and not a bottom USB plug that connects to your phone, you still have easy access to your USB port for file transferring and standard USB charging without the need to remove the case.

The magnets are strong enough to hold your device in place and does take a little effort to pull it off. As you can see in the image below where I hold the puck and let the S4 dangle.

I have been using it the car and have had no issues with my phone staying put around corners and bumps, but with it only using magnets to hold it in place I would imagine a major jar or crash would send the phone flying. I have no intentions of crashing my car to test this though. Sorry.

Patriot has something good going here. I have never been sold on wireless charging until now. Each of the three charging devices look nice, don’t take up much space and connect the first time thanks to the magnets putting it in place. With the stand, puck and car units out-of-the-way I hope Patriot can get things rolling in the case department of more devices soon.

Pricing is something that could turn you away from the products. If you believe in solid products from a solid company then the price tag won’t phase you. Add in the fact that the kit has built-in circuit protection against over voltage, over current, leakage and short-circuit certainly helps, but Patriot also backs the kit with a 2-year warranty. That is pretty sweet really and something they don’t have to do. Combine that with the ease of use and speed of the charge, the starter kit with the case and stand being listed for $99.99 isn’t a bad price. That is for the Galaxy S5 or the iPhone 5/5s.

The charging puck will set you back an additional $39.99, as will an additional stand. The car mount charging base will cost a little more at $59.99.

Currently I am only seeing them available for purchase directly through Patriot. I assume they will find their way to NewEgg at some point, but the kits and docks are relatively new to the market having only been released in July. If you are interested in the product and want to learn a bit more, or want to buy some, head over to PatriotMemory.com and take a gander.