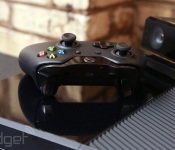 Microsoft gave viewers a peek at the continuing evolution of the Xbox One just ahead of its E3 press conference, but everyone should get to try out the new Snap mode for Achievements next month. That’s because the feature is a part of the July update about to start testing, along with a few other tweaks. In case you missed the E3 preview, there’s a video demo of the multitasking-ready new Achievements mode after the break, showing how it lets players track their progress while staying in the game, and even search for help on how to reach their goals.

Another change is helpful to gamers rocking a Kinect-less Xbox One, as double tapping the home button will pull up the Snap menu (since they clearly can’t say “Xbox, Snap (insert app here)” and choose an app to run in the side bar. Double tapping already served to switch back and forth between running apps, but now it has another use. There’s also a tweak to let people choose which language model their Xbox One responds to, even if it doesn’t match the country they live in, and support for game publishers to sell digital bundles and sic compilations in the future. Last but not least, the activity feed and Game DVR are getting some post-MySpace style social features. You can “like” your favorite recorded clips, or notes that pop up in the activity feed while you’re using the SmartGlass remote app. We wonder if those likes will ever cross over into other social networks or apps like YouTube and Twitter, but we’ll have to wait for the full release next month to know how everything works for sure.

Achievement Snap Mode and more coming to Xbox One in July http://t.co/F1hKHKADbZ