Customize the Daydream feature in Android with Daydream Widgets 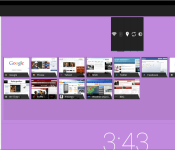 Like most of us, are you trying to make your Daydream feature in Android a little more useful? Daydream Widgets is the missing link in making one of the most underused features in Android actually useful.

Added in Android 4.2 Daydream is a feature that Android added that is more or less a screensaver for your device while idle or docked. The feature will allow the Daydream screensaver to display an array of visually appealing colors, photo frame, photo table, and more to entertain you while your device is docked. Some apps have built in Daydream plugins to display information relevant to the app, but most are not very customizable.

Daydream Widgets takes this bland Android feature a step further by allowing you to put almost any widget you want on the Daydream screen. You can pick a couple widgets and even personalize the background color of the Daydream. Imagine having your weather widget displaying by your email and your calendar while your device is docked. The widgets will cycle and show up one right next to each other or one after another depending on how you have it configured. The goal is to personalize the Daydream to your specific needs so that it will be most useful for you.

This app is an extremely easy to use and fully customizable solution developed specifically to make Daydream full of useful information, information that you want.

Daydream Widgets is a free app that you can download in the Google Play Store.

The post Customize the Daydream feature in Android with Daydream Widgets appeared first on AndroidGuys.