Poll: What is the best flagship smartphone of 2014? 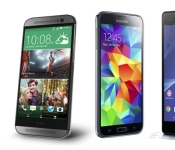 We’re nearly halfway into the year and we’ve got a lot of great smartphones out there. Right now we are surrounded by flagships like the Samsung Galaxy S5, HTC One M8, and the Sony Xperia Z2. Looking ahead we have the soon-to-be-released LG G3 joining the fray. Suffice it so say, all of them are amazing smartphones and each would be welcome in our hands. But, just for fun, let’s find out which one of them is the best of the bunch?

Internally, we each have our preferences and favorites, but we want to hear what our readers think. In the poll below we want you to pick the best of the big four releases so far. Which do you prefer? Is it the build quality of an HTC One M8? The sexy stylings of the Sony Xperia Z2? Maybe you’re a die-hard Samsung loyalist. Let’s hear your thoughts on which is deserving of the name “best flagship smartphone of 2014“!

Once you pick your favorite, head to the comments to back up your vote. Let us know what it is that made you choose that particular model!

The post Poll: What is the best flagship smartphone of 2014? appeared first on AndroidGuys.